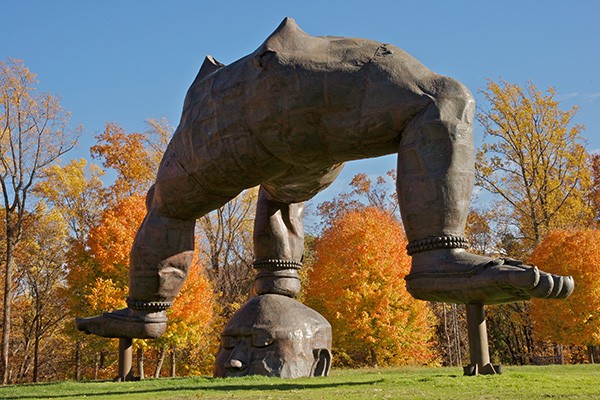 Three Legged Buddha by contemporary artist Zhang Huan is a 28-foot-high copper-and-steel sculpture on permanent display at the Storm King Art Center. It depicts the top half of a shaved head protruding from the earth, as three disembodied legs are splayed above it. One leg rests on the skull (which is modeled on the artist's head). The eyes of the Buddha are meditatively shut. "There is no preservative on the copper, so it's getting darker in the four years we've had it at Storm King. It's going to eventually turn green like the Statue of Liberty," notes curator David R. Collens.

Three Legged Buddha was the first Chinese piece in the Storm King collection. Since it was installed in the spring of 2010, Collens has planned a retrospective of Huan's work. "Zhang Huan: Evoking Tradition" opens May 3. This show will include five smaller outdoor sculptures near the permanent one, and works on both floors of the Storm King museum. Among these are sculptures made of incense ashes collected from Buddhist temples in Shanghai. The ash is mixed with chemical binders and shaped into portrait busts, but it's unclear who the subjects are. Titles like Ash Head No. 21 are not especially revealing. Without skin color and names, one can't be certain which face is Chinese, African, white—or even if it's male or female. These are quintessential humans, formed from a most ethereal substance. "Ashes to ashes, dust to dust," quoth the funeral service in the Book of Common Prayer. The show includes several jars of pure incense ash, as a clue to Huan's process.

Zhang nestled his sculptures some distance from the museum, where they won't be dominated by the Normandy château-style building. The works will stand in the "Maple Rooms," an eight-acre field designed by landscape architect Bill Rutherford. Sixty-four sugar maple trees were planted in a pattern forming three large rectangular "rooms." The "Maple Rooms" are a seven-minute walk from the museum, but a tram is also available.

Zhang Huan was born in Anyang, a large city in northern China, in 1965. While receiving a master's degree at the Central Academy of Fine Arts in Beijing, Huan became a member of the "Beijing East Village," a radical artistic community on the fringe of the city. In 1998 he emigrated to New York City and became known for performance art, including My New York (2002) in which Huan appeared in a suit made of raw meat—a possible influence on Lady Gaga? In 2005 Huan became a practicing Buddhist. The same year, he returned to China, eventually settling in Shanghai.

How do you depict Buddhism in a sculpture? It may be the most nonmaterialistic philosophy. Huan chooses paradox and riddles: a Chinese surrealism. In two of the sculptures, Buddha's head rests on the ground, as if his body were underneath the soil. What is the significance of an "underground Buddha?" Does it suggest that the earth itself is the body of the Enlightened One? Three Legged Buddha itself is highly ambiguous. The three legs smashing the Buddha into the ground—are they the limbs of Buddha himself? (If not, why's it called the Three-Legged Buddha)? And are the legs trouncing him, or is he supporting them? Zhang Huan will attend the opening of "Evoking Tradition" on May 3; you can ask him.