Zen and the Art of Discipline: Teaching Adults to Stop Fighting Like Children 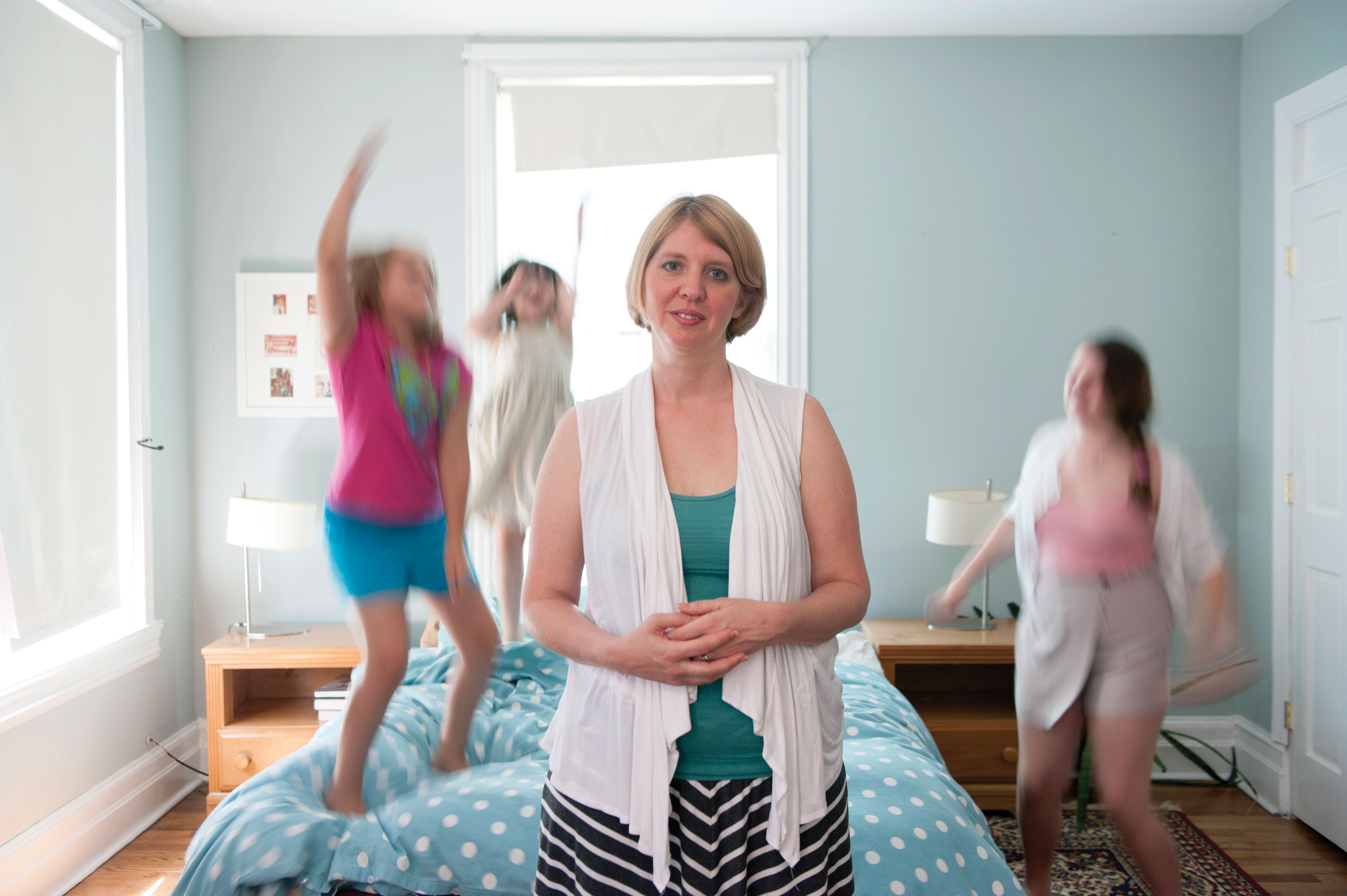 The hula hoops hang, unused, around the Kindermusik classroom in Red Hook while the students, in their stocking feet, sit in rapt attention. The teacher, Beth Anspach, in a tie-dyed t-shirt that reads, "We wish you well," animatedly details a framework for disciplining children. It's called Conscious Discipline, and it differs from traditional methods in its aim to strengthen a child's will rather than break it. It's not a technique or a set of steps that can be learned in a weekend, or even in her eight-week class series for parents and teachers. Anspach says it's a lifestyle.

As parents scribble notes, Anspach turns adage after adage about discipline on its head. It's not about how to make children obey; it's about how to help children be successful. Rather than controlling our children, we need to attune to them. It's an approach that adheres to only one old maxim: the only person you can change is yourself. As the mother of Conscious Discipline, Dr. Becky Bailey promises, with a change in parental behavior, children feel connected and mirror the attitude. But it requires a new perspective.

"We equate misbehavior with a lack of respect," Anspach tells the class. But because of children's developing brains, there are social skills that they're missing. It's not neuroscience, but Conscious Discipline does rely on an adapted brain model to help caregivers cultivate compassion and empathy, both of which are needed during discipline. It focuses on three brain states: the brain stem (where tantrums happen), the limbic system (the emotional center), and the prefrontal cortex (where reasoning takes place). For kids' brains, which are hardwired to seek and appreciate patterns and routine, lengthy explanations when a child is in her brain stem, or a time-out while he's in his limbic system, is a missed opportunity to teach the missing skill (learning to calm herself or to ask for what he needs in an appropriate way). Seeking to draw children from the first brain state into the third, disciplinarians reach deep to remain composed, recognize where the child is at, and see the particular moment as a teaching opportunity.

In class, Anspach explains that she was once just another juggling mom. "All the things I thought were discipline didn't feel good or right to me." Feeling the pressure one day 13 years ago as her toddler tantrummed in front of the parents of her Kindermusik students, she thought, "There's got to be a better way to discipline." So she Googled that sentence, and found Bailey's 1994 book, There's Got to be a Better Way. Between reading and attending trainings with Bailey and her associates, Anspach earned the credential Conscious Discipline Certified Instructor and began to teach the program locally.

"Parents would cry on my shoulder, 'If I were a good parent, I would be able to make my child do this,'" Anspach remembers. "I wanted to share with them that they weren't failing at their jobs." In fact, the job title was failing. If we ask society at large What's a parents' job? the frank answer is: To make children behave. When we see a crazed toddler in the supermarket, we think, "That mother just needs to..."Anspach says we're clearly sending that message to each other. "The reality is that it's not possible to make anyone do anything without force, coercion, or manipulation. And then you're left feeling crappy and powerless." In reality, a parent's job is to keep children safe, and that, they can do. "Once you take that stress and pressure away from performing at making their children whatever, then parents can be in their problem-solving, brilliant brains, and set the limits to help their children be motivated."

Parenting a toddler or adolescent can sometimes feel like an abusive relationship. Any word or action, or even anything that happens outside the home, can set this person you love into an uncontrollable rage. And when you're a stay-at-home parent, like Erica Tamburrino, there's often no respite.

Tamburrino uses the Conscious Discipline script when her two-year-old is jumping on the bed. First, Tamburrino finds eye contact. "Sebastian, you're so excited, but that's not safe. I know you can think of another way to bounce." Giving him the opportunity to make his own choices keeps him calm and builds his brain. As Anspach explains, our brains respond to eye contact with serotonin, the feel-good hormone. And feeling good is integral to the brain development that makes lasting impressions. When Sebastian drops to his knees to bounce, she beams, "You did it!" Tamburrino says it's a struggle in the beginning. "It feels like a lot of manipulation, but Conscious Discipline refines some of your ways of saying things that matter a lot to a little person."

In a family of perfectionists, the tweenaged Elorah couldn't be wrong. She was born relishing the stimulus of conflict. Her mother, Erin Muller, recorded their interactions, and Anspach gave her feedback on ways Muller could dissociate. Stepping back helped Muller to realize that it was physiological for Elorah. Feeling less critical of herself, Muller could see how to support Elorah while presenting clearly defined limits.

In conflict, even with our own beloved kids, it becomes personal and internalized. Parents almost get into the brain stem's fight or flight mode themselves. "What I learned through Conscious Discipline, after years of trying things, was that I have to keep calm first."

Even when parents are with their children all day, they're often digitally occupied. That isn't the face-to-face contact that builds key cortical limbic connections. "If we don't section out time where we are able to be present, children suffer," says Anspach. "That's what we see with behavior: children are often lacking that connection."

Tamburrino and Muller incorporate discipline into their everyday lives by heading off problems before they happen. With Elorah, it's about strategizing different scenarios so that when she's in a situation, Elorah has a plan. "We expect kids to have all kinds of skills," Muller muses. "You don't expect a two-year-old to read; you can't expect they'll stop what they're doing instantly. It's not skills they have, and that's OK. We have to help them learn those skills outside of the conflict."

Now Muller sees it as a teaching moment when her younger son tries to climb into the oven because he thinks it's fun, and she's careful not to manipulate Elorah's accommodating sister into doing things to make her happy. "That's not my job to get them to comply right now. It's my job to teach them healthy emotional functioning." And as Anspach says, "You can't teach something you can't do yourself." Muller feels that she can't expect her kids to behave in a situation better than she does. When Muller releases her own perfectionism, it allows Elorah to let go of hers. "But if nothing changed in my kids' behavior, I have a different perspective. If nothing else, I feel better about my own behavior."

Nicole Mack was a great parent to her little girl, Skylar. Then she had twin boys. "You get tired. I found myself yelling. I didn't like how I was interacting with them." There was tightness in her chest, and she felt pissed off. "I was overwhelmed, and everyone was screaming. It was horrible." When she practiced Conscious Discipline skills, the tantrums didn't last so long. "My tantrums, my husband's tantrums," Mack quips. "Everything is calmer in the house."

As Bailey writes in the core Conscious Discipline book Easy to Love, Difficult to Discipline, "Remember, discipline yourself first, and your children second." In any situation, your intention precedes you, and that's where traditional, fear-based discipline methods like time-outs, elaborate punishments, and spanking fails. The unconscious intention is to shame, punish, or make someone do something. The students of Conscious Discipline are learning love-based discipline, where they practice being present and composed in moments of family conflict, rather than always needing to improvise. They hope to download their calm to their children. But that transition is a practice. "[It's] about lasting inner change for you and your child. Such change demands time, effort, and persistence," writes Bailey.

In the last year, Conscious Discipline has helped the Mack boys interact as toddlers, taking turns and playing well with others. Skylar uses the language, too, when the three play together. "And I go to my room when I'm upset," Skylar says. It's her Safe Place—a Conscious Discipline term for a space where people go to calm down. Mack also uses the techniques in her Infant Swimming Resource lessons. To new swimmers, Mack gives two positive choices, which fosters a sense of control so they're open to learning.

"There's this idea that parenting is innate," Anspach says, "but the reality is that it's learned." In her classes, Anspach teaches adults to disengage so other people's behavior doesn't impact them. Parenting is stressful, and it's easy to be overwhelmed when constantly policing the children. Tamburrino feels it brings up old feelings of powerlessness: people being hurtful or not recognizing your feelings. "You're your own therapist in a way when you're parenting." When she tells her son, "You're having such a rough time," it's a way to remind herself, too. "They are having a hard time; they're not doing it to you," says Tamburrino. Conscious Discipline helps parents to notice what their triggers are and manage their own internal mayhem. Because combing your home or the world for ways to help and connect with people leaves no room to take things personally.