A Q&A with co-director Neil Cohen 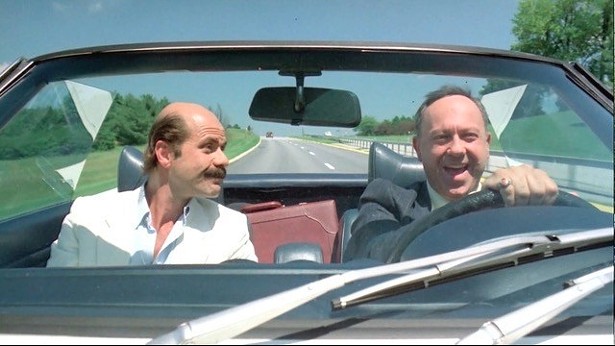 In 1986, fledging writer Neil Cohen and enigmatic character actor Zach Norman (Romancing the Stone) teamed up to film Chief Zabu, a low-budget comedy about a New York real estate developer with political ambitions that was filmed almost entirely on the Bard College campus. In addition to Norman, the film features a who’s who of character actors from the 1980s, including Allan Arbus (“MASH”), Ed Lauter (The Longest Yard), Marianna Hill (The Godfather Part II), and Allen Garfield (Mother, Jugs & Speed). Due to a series of unfortunate (and typical-to-Hollywood) events, it was never released. On August 7, Chief Zabu became available to stream. Co-director Neil Cohen, who divides his time between California and the Ulster County hamlet of Accord, chatted with us recently on the film’s strange 34-year journey to release.

Tell me about the road to making Chief Zabu.

I was an assistant to a talent agent and just hated it. I had no idea what I was doing. I was very, very unhappy in that job. And one day into the office walked Zach Norman who had made any number of crazy, offbeat movies with a guy named Robert Downey Sr., who was Robert Downey's father. They had been friends for many years and they had done a bunch of things together and they were looking to hire one of the actors we represented.

The boss of the agency had no idea who these two guys were, but I did. So, he put me on that case and the deal took about, I don't know, somewhere between 18 and 38 minutes. I walked them to the elevator and this guy, Zach Norman, said "You look like the unhappiest dude in the world man. What's going on with you?" I mean, I was wearing a tie. I said, "Yeah, I'm so unhappy." He said "Why?" I said "Well, I don't know what I'm doing here." "What do you want to do?" "I'm a writer." He said, "Well show me some." So I showed him a script. He called me a week later and said "Quit your job. Come work for me." Next thing you know I'm working with this very eccentric, wonderful character, comedian, real estate guy, actor, Zach Norman. He financed the release of Hearts and Minds (1974), an anti-war documentary that won an Academy Award.

We were writing some scripts and some of them were funny, but they were all very big kind of comedies. One day over margaritas or something like that he told me the story of going to a hotel room, I think it was the Sherry-Netherland... Being summoned to the Sherry-Netherland to meet a guy named Chief Kapu. And Chief Kapu was a legit guy who was trying to get independence for Namibia from South Africa and Zach walked into this suite and all he saw was every hustler in New York. Every con artist, every shyster surrounding this guy, along with Warren Beatty and Elizabeth Taylor. At that point, Zach knew this man was doomed and he made a U-turn and left the suite.

I told Zach that's the most insane story I ever heard and that's our movie. We've got to stop everything, write that movie, because that's something I think we can shoot.

We took the location from Namibia moved it to the South Pacific where at that time a number of the island nations were trying to break free from France while at the same time France was still doing open-air nuclear testing.

It was a South Pacific fantasy, with the edge of a legit issue and an Abbott and Costello comedy of a real estate guy who had pretensions of wanting to be involved in politics, who was not very bright but had a lot of energy, and a New York guy, and we were certainly aware of Trump because we always used to see the Trump Pavilion, which was the most horrible building in Queens on the way to the airport. We kind of modeled the lead character a bit on Trump.

Trump was definitely on your mind.

He was totally on our mind. There were a lot of guys in New York like him, but he was the one that had the spotlight on him. So we wrote the script. Zach closed some real estate deal and before he could spend the money on something else, I said, “We have to make this movie.”

But you might not have had much experience making films, but Zach did right?

Yeah. But Zach did, so he called a friend to be the line producer. This line producer came to us, read the script, saw what we were up to and said "If you make me the producer, I know the head of maintenance at a college in the Hudson Valley and we can sneak in there for two weeks between the spring and the summer semesters." We said "Great, let's do it. We'll head up there and do it." The guy came back to us and said "Okay, we're going to slip in there. The only thing is we have to use 22 students as interns on the movie and do it real fast because I don't know how high up in the administration they know we're actually doing this."

We went up to Bard and the crew, who were all very, very young people from the New York Indie scene and this crazy collection of 1980s character actors and myself and Zach all lived in the dorm with these 22 students in bunk beds. But everybody was very well behaved and we ate in the cafeteria. In 15 days, we shot all the interiors for a day and a half in Manhattan without permits, just running around. If you see the businessmen go into the Plaza Hotel, we're in some location inside at Bard. If they're going into the French Embassy, two men walk into the French Embassy, then there was a scene in the French Embassy. That was set in Bard.

Then we did a scene on the Taconic Parkway with Zach and Allen Garfield. It's sort of uncut, pure cinema. We had no permits. There were no tow cars. There was no platform. All we did was we bolt the camera on a piece of wood, which we chained to the hood of Zach's Mercedes and then stuck a microphone in the backseat and sent them up the road. What you're seeing is this scene that's being shot without a cameraman present, without a director present, without a soundman present. It's just two guys staying in camera, driving down the Taconic talking about something that's very funny and very important to the movie.

As I was watching it, it did remind me of the other comedies of that time—National Lampoon's Vacation, Trading Places. When you were writing it and putting it together did you have kind of other movies in mind that you were thinking of? Were there certain touchstones for you?

Some of it was some of the early Robert Downey Senior movies like Putney Swope. I guess the other guys who would probably be most influential, not putting us in that thing, would be Hal Ashby, who made Being There and Shampoo and things like that, that were a mix of comedy with some undertone, but kind of a bizarre style in the shooting.

The movie didn’t get released until 2020. What happened?

Well, if you can imagine, we made a movie in 15 days. It's the first time Zach and I have ever directed a movie and we think it's normal to make your first movie with 43 speaking roles, 23 locations, purportedly taking place in 3 cities and 2 continents. In those days, to cut a picture together, it had to be 90 minutes to get distributed and at 90 minutes it was kind of shaggy. The distributor liked it and was going to put it out and a couple of weeks before it was supposed to come out, that distributor went bankrupt. At that point, it was going to be a big legal thing to get the film back from that company that was now in bankruptcy. I was already out in Los Angeles starting to write scripts and making a living as a writer in that system. Zach was acting in Hollywood movies and also back into the real estate.

We weren't that in love with what we had done, the 90-minute version. And to recut it in those days it would cost something between $200 an hour to $200 a day to hire an editor with a Movieola that would be able to cut 35-millimeter film and then you're going to have make all these different editions of the movie. It was just dauntingly expensive about something that we had somewhat soured on.

Cut to years later, Trump comes down this elevator. Zach and I had stayed friends but it was like—let's not talk about Chief Zabu. Maybe one day we'll put the driving scene on YouTube or something. He comes down the elevator and we say "Wait a second. We made a movie about a New York real estate developer who wants to have political power. Why don't we go find our movie and just cut everything out we don't like? We don't care how short it is. Maybe it'll be 40 minutes, maybe it'll be 20 minutes. We'll just throw it on YouTube because it's a safe platform and we know there's some fun stuff in it."

We transferred a VHS tape to digital and we sat in this apartment in North Hollywood and cut out everything we didn't like. We got it down to about 73 minutes. We really liked the movie. We put it on video on demand this week.

No. It's not my thing. I mean, I love writing and I love being in the editing room and I love whispering in people's ears what to do. But I'm not that guy. I want to tell all you kids out there, whatever they tell you to do and what you're supposed to want to do—you don't have to be that guy.

I've kind of made this stumble-bum living out of it and did a kids' book recently that I wrote and illustrated, American Gargoyles, about gargoyles on a Manhattan skyscraper who scramble to save their home from destruction. Illustrating this book was more to my level and my comfort zone than being a director.

The City We Became