Riots I Have Known

Riots I Have Known is 119 pages of hilarious absurdity set in a fictional Dutchess County prison. The not-so-funny setting may not seem like an ideal foundation to build a story that forces the reader to laugh out loud every other page, but this first novel by Kingston-based author Ryan Chapman is, well, a riotous piece of fiction.

Riots is narrated by an unnamed Sri Lankan inmate at Westbrook prison who has holed himself up in the Will and Edith Rosenberg Media Center for Journalistic Excellence in the Penal Arts. The media center, privately funded at an astronomical cost, houses the newest Macs and the most comfortable, ergonomic chairs. Why would a prison have a need for such a facility? Because it is the publisher of the world-renowned and award-winning publication The Holding Pen, which the barricaded unnamed prisoner edits.

While typing out a stream-of-consciousness pre-death "official accounting of events as they happened" during a riot, the narrator tells a superlatively inventive tale, making for a delightfully original novelistic approach.

The articulate inmate narrates with an academic tone tinged with airs of colonialism from his Sri Lankan roots. He is obviously knowledgeable, and his publication, The Holding Pen, is wildly popular in the story, as proven by the amount of Twitter followers, the remote staff of Oberlin interns, and the praise from the most revered magazines. But the absurdity of the situation makes you wonder if it was even real in the fictitious story. Or was this crazed inmate just penning a tall tale? It is all just that unbelievable. The creation of this character alone and the language he uses shows that Chapman is a compelling storyteller with an unbounded imagination.

Westbrook Prison itself is fictitious. The fundraising warden has courted deep-pocket private donors to create a progressive prison environment­­—progressive enough to start a prison-based publication, widely distribute it, draw millions of visitors to its webpage; and deep-pocketed enough to build a multimillion-dollar media center.

The outlandish comedy of the tale helps soften the raw themes that are addressed in the novel. Every prison situation you can think of: unwilling bathroom encounters, willing jail cell encounters, fights, homemade weapons, and the like, are all recounted in vivid detail. But the author's sublime command of language presents these situations unlike any other prison novel. Riots I Have Known is truly one-of-a-kind: It can be read in one sitting, provides at least 50 laughs out loud, and keeps you in constant awe of the author's writing abilities. It's nothing short of outstanding. 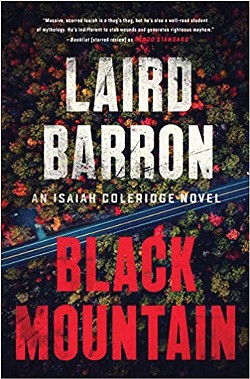 What has no head or feet and is gray all over? It's the latest victims in Laird Barron's new murder mystery, Black Mountain. Former mob-muscle Isaiah Coleridge, now a private investigator in the Hudson Valley, is hired to investigate the gruesome execution of a low-level gangster chronie. One dead body is bad, but when two appear, Coleridge suspects the infamous and chilling hitman-turned-serial killer Morris Oestryk. This follow-up to Barron's debut crime novel, Blood Standard, is packed with quippy dialogue and kick-ass action that drives the deadly narrative.

The only life During-the-Event (DE) ever knew was the peaceful existence of his rural home in North Dakota. But when an environmental catastrophe ravages the US, his life changes forever. In a twisted conservation effort, the government attempts to eradicate the weak and undesirable survivors to preserve resources for the social elites. The sheltered population lives in constant a state of drug-induced bliss as genocide survivors scavenge the wasteland. This disaster leaves DE equipped with only his wilderness survival skills and will to endure as he embarks on the wildest adventure of his life. Winner of the 2018 Permafrost Book Prize, this dystopian novel offers a frightening glimpse at the ramifications of climate change and the degradation of morality in survival mode. During-The-Event is also an engaging coming-of-age tale, pitting youthful innocence against the forced maturity imposed by this harsh post-apocalyptic landscape.

Everything Worthy of Observation

When Alexander Stewart Scott stepped on a Canadian steamboat in 1826, he never imagined that his diary would still be read over a century later. Everything Worthy of Observation documents his meticulous notes from the journey, offering a glimpse at early 19th-century New York and lower Canada. History buffs will enjoy Scott's detailed accounts ranging from the daily trials—enduring the dust kicked up by stagecoaches—to the fantastic—a first glimpse of the roaring waters of Niagara Falls. The narrative is aided by the expert editing of Paul G. Schneider, who decodes unfamiliar vocabulary and adds helpful footnotes. This historical book comes equipped with charts, maps, and sketches to illustrate the earliest iterations of our country.

In Spiritual Rebel, author and multifaith reverend Sarah Bowen draws from numerous ideologies, including Taoism, Jediism, and science, to provide a weekly guide for exploring one's own spirituality. Bowen rebels against the notion of singular faith, instead teaching readers how to draw their spirituality from everyday lessons and realize that there is no wrong path. She exudes her passionate and accepting tone through light and playful prose that is as enjoyable as it is enlightening. Her alternative methods to connect with your spiritual side range from bathing in the energy of the forest to catwatching and general mindfulness. Spiritual Rebel is an appealing read for atheists, agnostics, or spiritually seekers. 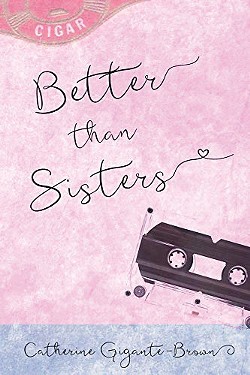 Brooklyn-born poet and novelist Catherine Gigante Brown explores female maturity and friendship in her latest novel, Better Than Sisters. The book follows Desi Ruiz and Cici Piccolo as they overcome the obstacles of growing up and blossoming into young women in New York City. Readers follow along as the two slowly, and sometimes painfully, emerge from their shy cocoons and evolve into beautiful and confident young women. Along the way, Ruiz and Piccolo deal with all the classic coming-of-age challenges such as first love, grief, and, of course, puberty. While their problems threaten to push them apart, they must fight to overcome their differences. Brown's first-person and comical tone is reminiscent of a youthful tale from your parents, with all the lessons and honesty that come attached. 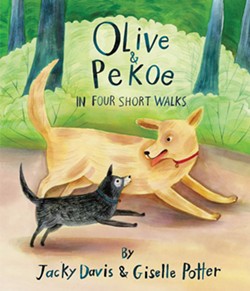 This children's book follows two canine companions, Olive and Pekoe, as they share four short walks through their town and forest. Pekoe, with a young and energetic golden retriever, is ever-curious, constantly looking to play. Olive is the elderly companion who shuffles behind the puppy as they set out on adventures. Based on the author Jess Davis and the illustrator Giselle Potter's actual dogs, the two main characters have an endearing relationship where Olive serves as the wise old mentor and Pekoe is the cheerful company. Together the two chase chipmunks, get caught in a thunderstorm, and meet with other dogs. The tale is accompanied by Potter's signature whimsical illustrations, which are sure to delight young readers.