They Still Have It 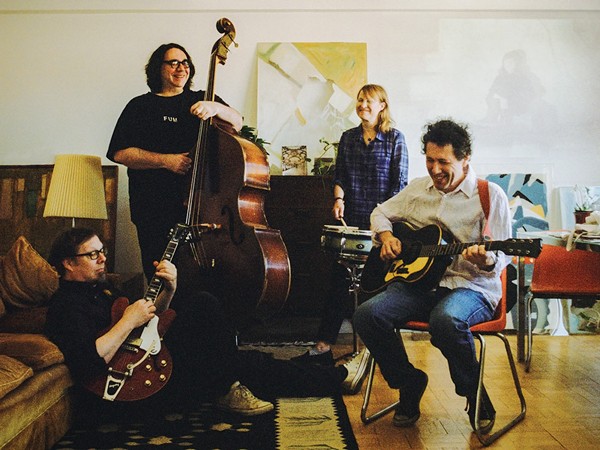 Despite the dream, even mainstream, multimillion-dollar success doesn't guarantee longevity for a band. In fact, the roaring rocket of fickle fame has hastened the implosions of legions of bands, their demises brought on by managerial pressure, the loss of their private lives, and a disconnect with what they originally thought they loved doing. It can all begin to feel like a job, and you get into rock 'n' roll because you don't want a job. The ideal thing, then, is to reach a level where you can keep making artistically satisfying music while maintaining a steady, clued-in fan base. Most bands flame out long before they get there. So Hoboken indie institutions like Yo La Tengo, who will perform at Club Helsinki on March 26 and recently celebrated their 32nd year of performing, are a true pillar of inspiration.

More than three decades in rock. There must be an awesome feeling that comes with that. "I don't really think about it much," says singer and guitarist Ira Kaplan. "But there was a moment during one of the anniversary shows we did at Town Hall in New York. We were doing the first song we ever played live, a cover of 'Surfin' with the Shah' by the Urinals, and we had about 25 people on stage with us who'd been really important to our music, like Tony Maimone from Pere Ubu, Clint Conley from Mission of Burma, Gene Holder from the dB's. I wasn't emotionally prepared for that."

Yo La Tengo—the name is Spanish for "I have it"—was formed as a duo in 1984 by Kaplan and his wife, vocalist and drummer Georgia Hubley. The pair soon found collaborators who shared their formative influences (Kinks, Soft Boys, Velvet Underground, Mission of Burma, Love) in lead guitarist Dave Schramm and bassist Mike Lewis, who joined prior to their 1986 debut, Ride the Tiger (Coyote Records). Schramm and Lewis soon left, and Kaplan and Hubley continued as a trio with other bassists, releasing 1987's New Wave Hot Dogs and 1989's President Yo La Tengo (both Coyote), Schramm briefly rejoined for the 1990 covers album Fakebook (Bar None Records) and bassist James McNew came in soon after.

Across 14 albums, the band has traversed straight-up pop, tender acoustic sparseness, raging punk, instrumental soundtracks, dreamy psychedelia, and abstract noise. Their newest release is 2015's Stuff Like That There (Matador Records), another covers disc featuring Schramm. In addition to songs by Hank Williams, the Cure, and Sun Ra, the group revisits tunes from their own Electr-O-Pura and I Can Hear the Heart Beating as One (1995 and 1997; both Matador). "[Reprising the older originals] comes out of a certain reflection, I guess," muses Kaplan, whose band backed up Ray Davies on tour and portrayed the Velvet Underground in the 1996 film I Shot Andy Warhol. "But not in a linear way—more impressionistic."

"[In Hudson] we'll be doing one set of quiet songs and one of loud songs," says the singer. "You never know what people will like. Hopefully, they'll enjoy both sets equally."