DIY Your Own Natural Sodas and Meads Like a Pro: A Guide | Recipes | Hudson Valley | Chronogram Magazine

DIY Your Own Natural Sodas and Meads Like a Pro: A Guide 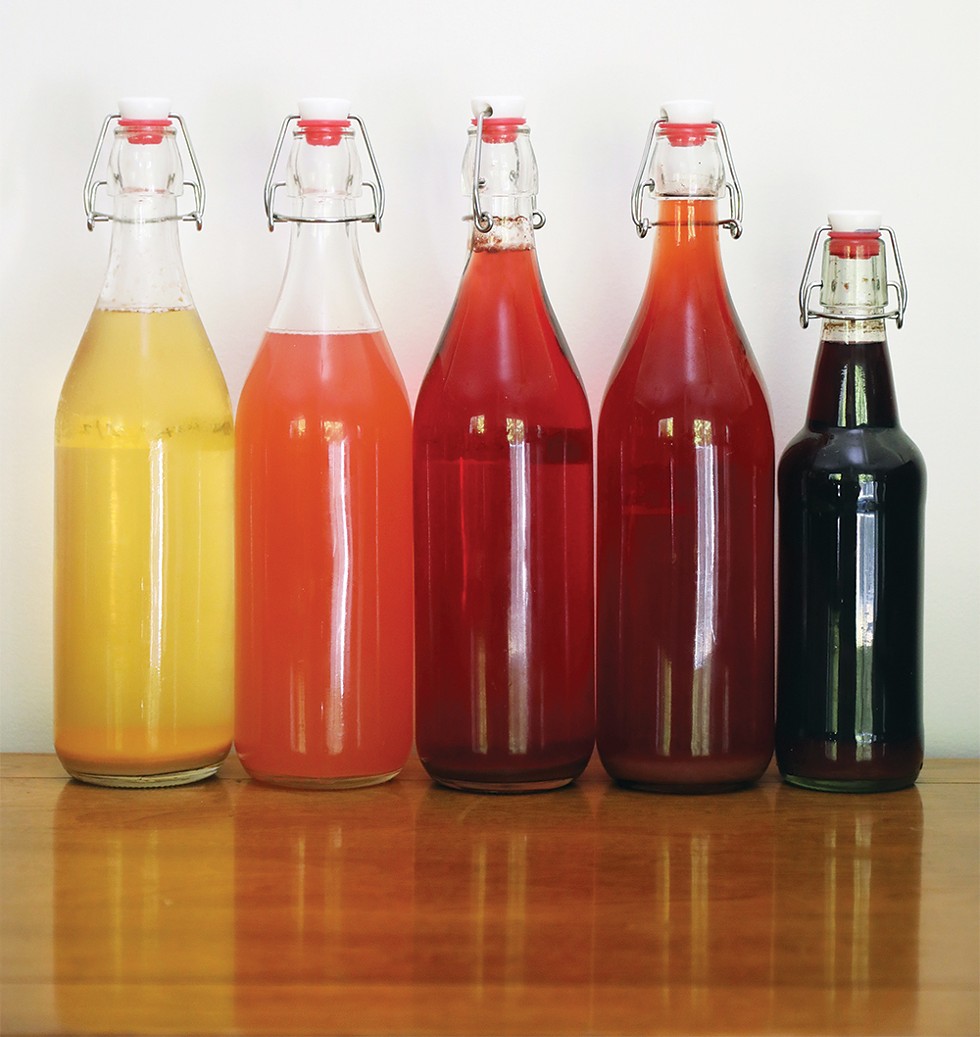 Our growing season spans roughly five months, and a lot happens in that short time. I do a lot of pickling and freezing to preserve the bounty from my garden, but recently I've been turning more of the harvest into liquids.

There's a pretty good chance that you have soda, kombucha, wine, and vinegar in your kitchen right now. You may not know that all four of these things exist on a spectrum, a continuum of fermentation, and that you can make all of them on your kitchen counter with minimal gear. In addition, you can flavor them in all manner of ways using local ingredients and save a lot of money. By steering the process at a few points you can arrive at each of the four destinations listed above, and a lot of fascinating in-between places as well. There is no lovelier way to mark and celebrate the passage of time than by drinking a progression of elixirs made from the leaves, fruits, and flowers of summer.

To begin, you need a source of yeast and bacteria. These industrious beasts will transform your raw materials into whatever you desire through the alchemy of fermentation. A kombucha SCOBY (symbiotic culture of bacteria and yeast) is like a vinegar mother: a cellulose raft that forms on top of fermenting liquids. They can be bought, but they also grow readily given the right conditions. A bottle of store-bought kombucha or raw cider vinegar is a good inoculation source, but I prefer to start my own by gathering wild yeast from the plants around my house and building a robust fermentation culture—much like a sourdough starter, but for drinks—over the ensuing weeks. Depending on how and how long they're fermented, this diverse microbial colony can create sodas, kombuchas, meads, and vinegars. 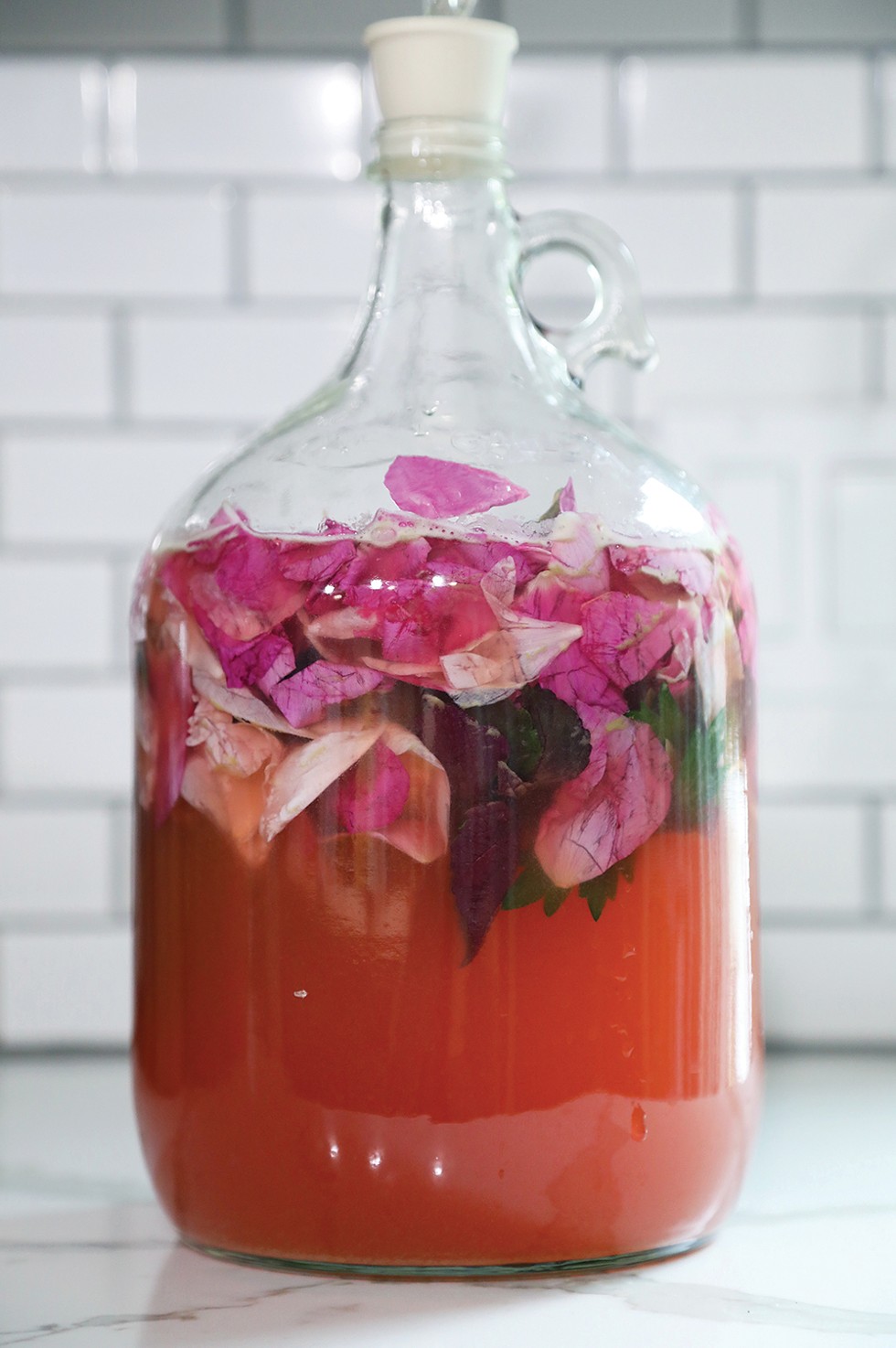 How I Made Your Mother

I begin each spring in early May by harvesting spruce tips, the bright green new needles that taste strongly of lime. They're covered in wild yeast. I put them in a jar with a maple syrup or honey solution and let it sit on the counter, loosely lidded, for a week or two until it gets fizzy. Meanwhile, I gather a variety of early herbs and flowers from my yard and garden to begin a second jar: mint, bee balm, and anise hyssop leaves; dandelion, violet, apple, cherry, plum, and peach flowers. I add a splash of the spruce starter to this second jar, and keep doing this throughout the season; each new jar receives a bit of the previous ferment, compounding its biodiversity and vigor. By the dog days of August, it's a frothing monster; a half pint of it will set my three-gallon carboy bubbling in less than a day. I keep the spruce separate, because I like it by itself as a drink, and then I let the remainder become vinegar. (More on this down below.)

As the season progresses, each week sees a new mixture. Rhubarb juice is an excellent addition and obviously pairs beautifully with strawberries (which I just mash up and add to the jar). The beach roses outside my front door make an incredible soda on their own, and the rose-rhubarb mead I bottled last week gives new meaning to rosé.

In July, the red currants and gooseberries ripen, and the sour cherries, followed by elderberries, black currants, and peaches. Summer's end means the grapes are ready. For complexity and depth of flavor, I also add whatever herbs are happening at that moment, or sometimes just make an herbal mixture without any fruit. Yarrow and mugwort are excellent for contributing a little bitterness and structure to anything you want to age for a while.

Once your starter is vigorous, there's no limit to the ways in which you can deploy it. Tomatoes and celery (and horseradish, and hot or black pepper) can inspire Bloody Mary vibes: imagine spicy tomato kombucha with vodka on ice. Push this a little harder into savory territory (with onions and garlic) and you're making hot sauce. Add salt at the beginning and you're lacto-fermenting. Add it at the end, and you're seasoning spicy vinegar or fire cider. This rabbit hole has no bottom, only intricately ramified side passages that lead to infinite variations on your favorite drinks and condiments. 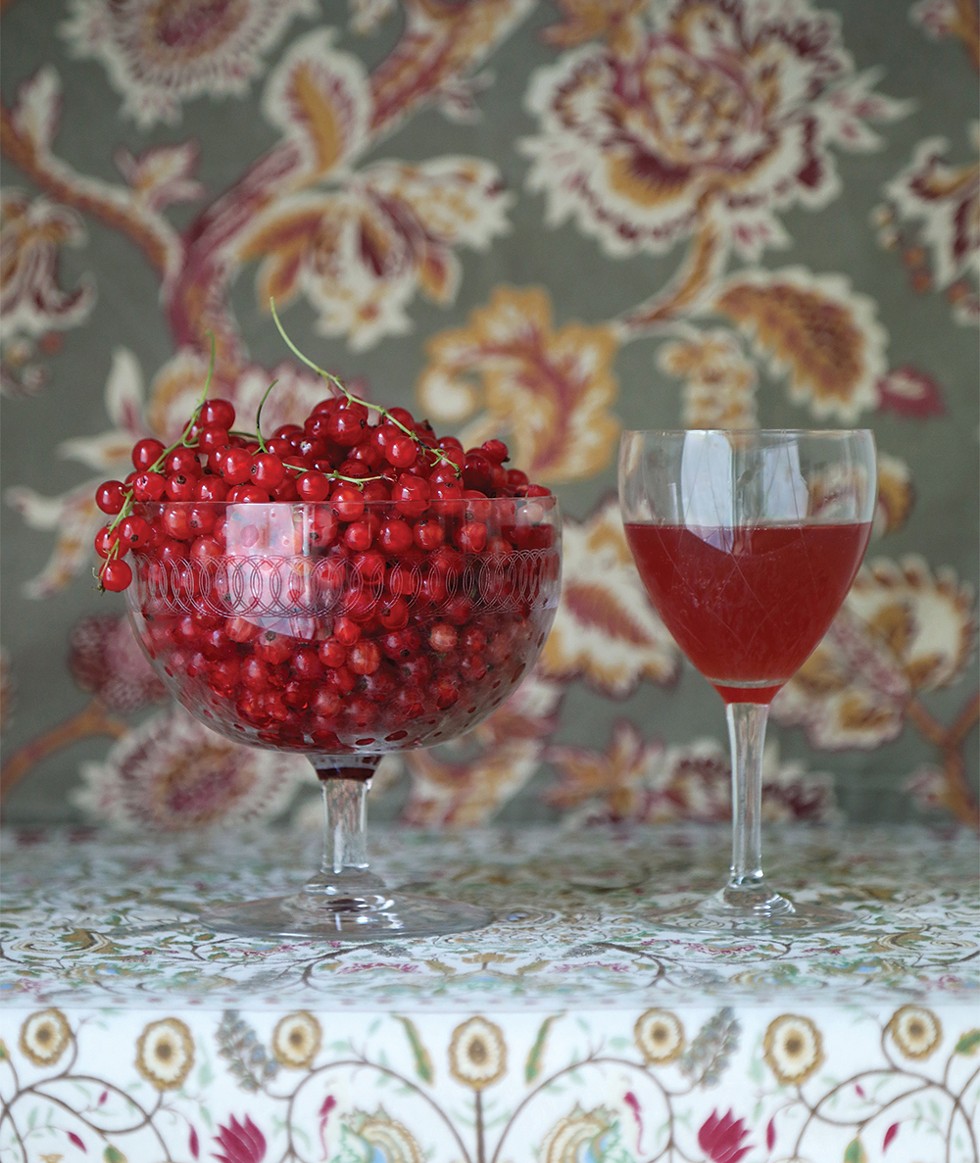 My master ratio is eight-to-one water to sweetener, or one cup per half gallon. Half-gallon jars are readily available in the canning section of your local hardware store, so that's a good volume to start with. More often than not, raw local honey provides the sugar source (plus its own dose of yeast). I like honey and maple because they're local products, and because they have their own flavors and characters. Sugar does the job, but it's boring.

Your flavors—fruit, flowers, leaves, and such—should take up somewhere between a quarter and half of the jar. Mash, puree, or juice the fruit (depending on its nature), add herbs and flowers, and then fill it with your sweetened water. Leave some room at the top because once it begins fermenting, it will foam and push the leaves and skins up quite a ways. Don't screw the lid on tight, since gas will need to escape. I like to screw a mason jar ring over a folded square of cheesecloth instead of a metal lid; this allows ventilation while keeping fruit flies out. After a couple of days (sometimes a lot longer) of macerating, I strain out the skins, leaves, and flowers and let the liquid ferment in a clean jar.

Whether purchased or grown, your starter knows what it's doing. Very simply: yeast turns sugar into alcohol and carbon dioxide. Acetic acid bacteria turn alcohol into vinegar. By leaving your liquid exposed to air you're allowing both kinds of fermentation to happen more or less simultaneously. That's why kombucha has negligible amounts of alcohol and tastes vinegary. Leave your jar open on the counter at room temperature and taste it every couple of days, since the beauty of this process reveals itself over the course of fermentation. In the early days, it gets a little fizzy but is still very sweet. Bottling it at this stage makes for wonderful homemade sodas, suitable for kids, and also some exciting mixological possibilities. Be aware that especially with younger ferments, pressure will continue to build in the bottles. Keep them refrigerated, and open them carefully to avoid hosing down your kitchen with fruity probiotics.

For older ferments, a little more sugar or fruit juice is added before bottling, so that a secondary fermentation occurs; because this happens in a sealed container, the resulting carbon dioxide is forced into solution, carbonating the drink. Swing-top bottles (like Grolsch beer, with rubber gaskets for a tight seal) are ideal for home bottling and come in a variety of sizes. Carbonation achieved this way is delicate—a fine fizz in comparison to the brash bubbles a soda maker forces into your seltzer.

Ginger is a logical choice for fermenting and increasingly available from local sources. Homemade wild-fermented ginger ale will change the way you think about soda. The skin and core of a pineapple, fermented for a few days in sugar or honey water, yields tepache, a popular drink in Mexico. Try it 50/50 with coconut water. Now add some rum to that. You're welcome.

Speaking of tropical imports, and since kombucha is tea, why not use coffee? Especially coffee grounds, which most homes produce by the ton. A 24-to-48-hour infusion of a cup of used grounds (or about half that much fresh) in half a gallon of sweetened water yields a beautiful auburn decoction, which, when strained, ferments into a compellingly complex beverage. I like to pour a double shot of espresso over ice and then top it with an equal amount of coffee kombucha for a stellar summer pick-me-up. (A meaningful percentage of this piece was written under the influence of this very drink.)

Sweet potato and other vegetable peels, such as carrot, cucumber, and beet, are great additions as well. Keeping a ferment going on your counter means that at any given time you have the means to extract flavor and nutrition from not just beautiful fruit and flowers but also the humblest trimmings. And it's a lot sexier than a compost bucket.

Vinegar is the Vanishing Point

If, say, after straining out the solids, you were to pop an airlock on your jar—and airlock lids specifically designed to fit wide mouth mason jars are easily found online—then the space up top fills with carbon dioxide, pushing out the air. Acetic acid bacteria need oxygen, so excluding it means that the alcohol remains uneaten. Now you're making country wine, or rather mead if honey is involved (acerglyn is the cumbersome term for wines made with maple syrup as the sugar source).

Besides the sodas and kombuchas, I make a variety of meads with fruit from the garden. I let these ferment for longer, until the airlock bubbling slows way down or stops altogether, and then bottle them. Any residual sugar makes them beautifully fizzy, and those examples with higher acidity (from things like gooseberries, grapes, and rhubarb, or a longer initial open fermentation) age really well.

Last year's peach mead, flavored with holy basil and foraged sassafras, is drinking beautifully a year later. Bottle-aging on the lees (yeast sediment) adds a lovely complexity. It's not going to replace fine wine in the rotation, but it sure does make for some pleasant sipping (and killer spritzers with homemade bitters and liqueurs). And it's worth noting that this quenching homebrew cost me about $3 a bottle to make, and that was all for the honey; the rest (fruit, herbs, and yeast) was homegrown.

If any of these beverages become too sour for your taste, just let them be. Gently agitate them every now and then, and be sure to keep them covered with cloth so fruit flies can't get in, and somewhere between six and 12 months down the road, you'll have vinegar. Vinegar is the vanishing point, the place where all these different avenues ultimately converge—the final resting state of all these fermentations. I made a killer faux key lime pie using spruce vinegar for the curd. For a real eye-opener, try making red-eye gravy with coffee kombucha or vinegar.

This ongoing collaboration with nature, which enlists all three kingdoms, engenders a deeper appreciation of the bounty that surrounds us and furnishes bright bottles for fending off the impending cold.

Food blogger and photographer Peter Barrett will teach a class on fermented beverages at his home on September 8. For more information, email acookblog@gmail.com.

By Mike Cioffi, Chris Bradley and Sara B. Franklin