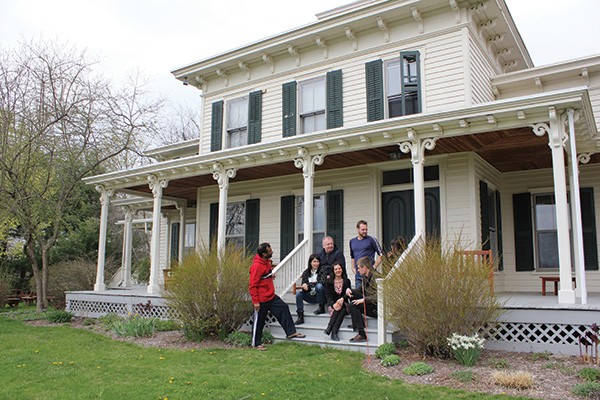 Free of the usual daily grind, including the time-consuming need to "hunt and forage" for food, time here is deliciously one's own, and she's been able to work at a fast, concentrated pace. Having attended other residencies, Landsman says Omi has something more: "Especially if you come yourself from another place, the international nature really adds another layer. We're all here because we love language, we love words. But you also get a chance to step into someone else's shoes and look at the experience of being a writer differently." She cites a recent conversation with Blasim about his childhood—his mother was 14 when he was born and is younger than Landsman, the mother of two teenagers, is now. And, curious about their perspective, Landsman invited Abarbanell and Austrian playwright Reinhard Kaiser-Mühlecker to watch The Sound of Music one night. "They were clearly not as impressed with this version of the story as I've always been," she says.

Ledig House's monochrome decor and harmonious, Federal proportions add to its muted, almost judiciously recessive atmosphere, in which the sparks of intelligence and inspiration among its guests are all the more visible. We're joined by Abarbanell, clad in a similar uniform to Landsman's: sweater, jeans, and boots. Abarbanell is known for luminous, meticulous translations of writers such as Jonathan Franzen, Denis Johnson, and F. Scott Fitzgerald; her recent translation of The Great Gatsby sits on the sideboard.

To get a sense of life at Omi, we head to the dormitory barn. Their rooms are rustic duplexes, the walls softly whitewashed conglomerations of beams and planks: very Hudson Valley vernacular. Each room has a sleeping loft; its most prominent feature is a sturdy, solid workhorse of a wooden desk. Landsman's chapters cover the steps; a pair of running shoes are tucked in the closet. Abarbanell's desk is laden with a thick, open dictionary and the book she's currently translating, Rachel Kushner's The Flame Throwers; her computer screen seems poised on its stand, mid-thought. Abarbanell, who lives in Potsdam, Germany, was thrilled to get the chance to come to Omi, as much for the dip back into American English as the creative retreat. "I can read and read," she says, "but for me as a translator, it's really important to talk to people and hear them talk. It's so much about music, and rhythm: How do people talk nowadays? This is just a fantastic chance to do it."

Despite their short stays (Abarbanell is spending four weeks; Landsman, three), both are happy to talk a bit more. There's an easy conviviality, a shared sense of delight at this novel, lucky situation. We sit on the broad porch of Ledig House overlooking the sculpture fields. Across the river, the distant panorama of the Catskills is a hazy blue. There's talk of a hiking expedition, but mostly we stick to writing, and how being away from friends and family and life is an entirely different kind of work. Then, clearly, it's time to get back to it. On the way out, I pick up Abarbanell's translation of Der Grosse Gatsby and find the last line. "Ah," she says. "That last line. Really, it's all about that last line. I had to get it just right."

In the behemoth that is publishing, only 3 percent of all books in the American market are translated from another language; less than 1 percent of those are literary works. To introduce American readers to international writers—one of Omi's mandates—takes more than a quiet room and a good desk. "We have it in our budget to get a small portion of a writer's work translated so they can show it around," Gibson says. Frequently, he brings editors and agents up from New York City for dinner with the residents. "I work as a kind of matchmaker in a sense, trying to find good fits," he says. Such an evening led to an American book deal for Icelandic writer Kristen Omasdottir for an English-language version of Children in Reindeer Woods.

Gibson's well aware that fostering this remarkable cultural exchange can be slow and painstaking, not unlike the process of writing, or translating, a book. But person by person, book by book, dinner by dinner, event by event, Omi is having an impact. Its last public reading on April 12 brought some 80 people in contact with writers they'd otherwise never have known. On May 10 at 5 pm, Hudson Valley residents will get another chance, when Omi hosts a barbecue and reading: locally sourced food, internationally sourced writers. A delicious combination.