After watching the film Bitter Feast, it is more than fair to wonder whether screenwriter-director Joe Maggio is either a brilliant filmmaker or a brilliant sadist. Producer Larry Fessenden responds, “I think he’s a little of both.” The result is a highly stylized horror film that easily transcends the confines of its genre.

Bitter Feast concerns celebrity chef, Peter Grey, (indie film legend James LeGros) at the end of his tether. After years of omnipotence as a celebrity, hosting a cooking show and running a trendy bistro, the arrogant chef loses both jobs on the same day. (Mario Batali more than holds his own in the role of Grey’s business partner.) Grey becomes unhinged and launches a vendetta against restaurant blogger JT Franks (Josh Leonard), whose poisonous reviews he blames for his downfall. After kidnapping the foodie and stashing him away in the basement of his upstate New York home, Grey subjects his hostage to a series of cooking challenges, each of them more twisted than the next. Consider Bitter Feast the gourmet version of Rob Reiner’s Misery.

While unsettlingly effective, Bitter Feast is a departure of style for the director. “It’s funny,” says Fessenden, a Brooklyn-based veteran indie director and producer, and principal of Glass Eye Pix. “Maggio doesn’t make horror films by trade. He’s a neorealist, small-ensemble-movie kind of storyteller.” But Fessenden, who had seen the director’s previous works, recognized in them “a sort of suppression and then an eruption of violence. So I knew it was in him.” When he suggested Maggio write and direct a horror film, something preternatural was unleashed.

“Well, of course he came out with both guns firing,” Fessenden says of the script and final cut. “Clearly, there’s an anger problem there.”

Bitter Feast offers entertainment far more substantial than that of the typical slasher-on-the-rampage-killing-teens fare. Along the way, the film provides potent social satire. It dispenses pointed observations about America’s fetishization of gourmet food, our hero-worship of chefs, the unbridled power of the Internet when used to wound reputations, and moral issues surrounding what we place on our dinner plates. Maggio provides ample moments for the thrill-gore junkies. But he also gives the thoughtful filmgoer plenty to er, chew on.
Larry Fessenden, whose own films (including Wendigo, a 2001 Woodstock Film Festival winner) depict man’s carelessness towards nature, was pleased to see that Maggio explored these themes in Bitter Feast without his counsel. “It makes me happy to have [Bitter Feast] part of the Glass Eye Pix canon, this rather scathing comment on how we’re all butchering each other.”

“We helped Joe,” Fessenden says. “There were things about the script that we really liked and I think we wanted to telegraph them.” The producer also shows up onscreen as a rumpled detective, obsessed with the case of the missing blogger.

Anchoring the story is James LeGros’s portrait of the talented but repellent Chef Grey. Maggio had envisioned the character as slightly more rugged, given to hunting and slaying his own food on his country property. Instead, LeGros made Grey a haughty, overly fussy culinary fascist, trapped in a world of philistines with pedestrian taste buds.

While Grey and Franks, cut from the same wretched cloth, seem to deserve one another, the filmgoer is nonetheless caught up in their duel of wits, nerve, and culinary expertise, Fessenden says. “You enter into that world of male egos, both of them damaged and how they respond, one with violence and one with a poison pen.”

The rigors of the 14-day shoot are evident onscreen: Both leads must bash at one another physically and psychologically. But the daily tension was offset by the joy of the surroundings, the producer said. Fessenden opened up his Ulster County weekend home in Olive last summer, the house serving double-duty as both set and lodgings for cast and crew.

“It’s a real upstate film in the greatest sense,” Fessenden says. People would kick back in the evenings with “lychee martinis and beers and badminton,” and when the new day dawned, “we went down into the basement and we tortured each other.” 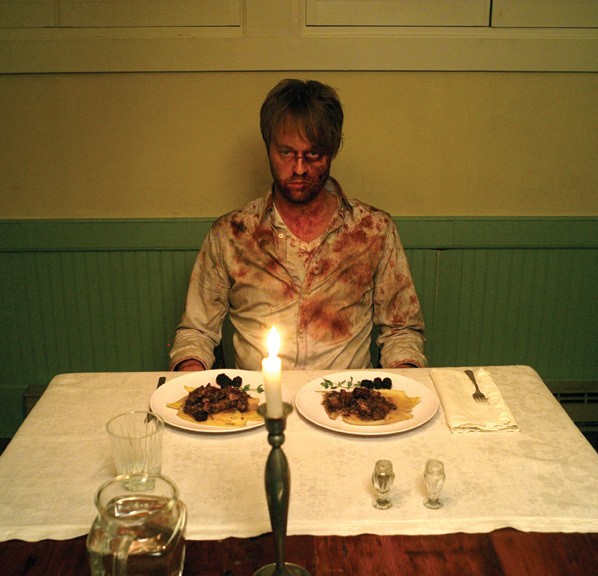