To the list of magical places that includes Kubla Khan’s Xanadu and Alice’s Wonderland, we may confidently add Marwencol. While this place actually exists—it is a miniature town, located in a backyard in Kingston—Marwencol thrives more audaciously within the mind of its creator Mark Hogancamp, the subject of Jeff Malmberg’s humane and compelling documentary. Marwencol powerfully confounds our simplistic definitions of disability and genius.

With equal parts skill and compassion, Malmberg illuminates the fitful journey of Hogancamp, 48, whose world was carpet-bombed in 2000 when five men attacked him outside a local bar. He awoke from a coma after nine days, but physical rehabilitation took several months. Hogancamp’s mental rehabilitation continues, in the form of his meticulously created World War II-era Belgian village, populated by dolls dressed as stalwart soldiers and sleazy bar girls. “No matter how much art it seems to be,” Hogancamp says during the film, “it’s still my therapy.”

Malmberg, 38, first encountered Marwencol and its architect in 2006, in a copy of the art magazine Esopus. Within a month, he was on Hogancamp’s doorstep. Malmberg, until then an editor of documentaries, had no funding in place when he arrived in Ulster County, nor a game plan. “I didn’t know what it was,” he says. “Maybe a short film or something. So I just went and shot.” Marwencol—and Hogancamp—would consume the next four years of Malmberg’s life.

Whether Hogancamp welcomed the filmmaker as a newfound friend or an attentive audience is not clear. But a symbiotic relationship was sparked. Hogancamp was soon confiding to his newly appointed videographer, literally opening up the drawers and closets of his life to the camera’s scrutiny. “He had so much to say,” Malmberg says. It appeared that Hogancamp, six years after the beating, “was ready to verbalize what had happened to him.”

Marwencol is cut deftly, the contradictions and mysteries of Hogancamp’s life linked together to puzzle, tantalize and eventually win over the filmgoer. Hogancamp is a reliable narrator, recounting facts, thoughts, impressions, and visions with a simple but profound delivery and a rough-hewn eloquence that fiction writers would kill to possess.

As the layers of his life fell away and powerful secrets were shared freely, Hogancamp never experienced a moment of confessor’s regret, Malmberg said. “I was always surprised how much faith he had in me,” Malmberg says. “I don’t know if he thought I was a bigger force than I was. I think it helped that I was from Los Angeles. He would always say, ‘Well, you’re from Hollywood!’”

Malmberg initially wanted the film to focus on his subject alone, to mimic his isolated life, “kind of quiet and peace and being alone.” But Malmberg eventually welcomed other voices to explain their relationship to the unique but fragile being in their midst. We meet Hogancamp’s mother, several friends, and the district attorney who handled his legal case. (Each valued friend in his life is honored with a doll and placed in the built-to-scale town.) During one day of filming, Hogancamp ran into the woman who had found his battered body by the side of the road a decade ago. But Malmberg eschews manipulative tactics; the segment was cut from the film. Nor does the director present a psychologist to assess Hogancamp’s cerebral state, sparing the film what he terms a “lab rat quality.”

Malmberg’s empathic treatment, wedded to his subject’s unique aesthetic, has made Marwencol a hit on the festival circuit. It premiered at South by Southwest in Austin, taking home the Grand Jury Prize.
Throughout the film, Hogancamp narrates and dramatizes key moments in the life of Marwencol, which are alternately romantic and horrific. There are boozy nights when soldiers unwind at the bar, entertained by scantily clad female wrestlers. There are also recurring surprise attacks by the Nazis, which Hogancamp depicts by energetically disfiguring the dolls. Most poignantly, the Hogancamp of Marwencol finds love, which eludes his real-life counterpart.

Malmberg dismisses the notion that his filming motivated the artist’s ongoing construction of Marwencol. “If nobody had come along, myself included, he’d still be doing it today. It really is that much of a personal thing for him.” 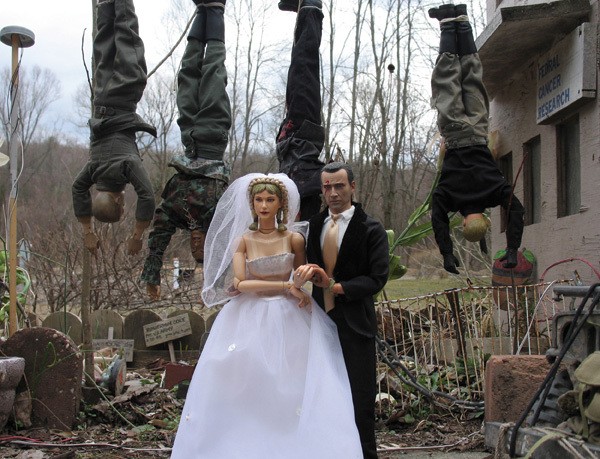