Winter may be taking its time arriving in the Hudson Valley this year, but when it finally rears its snow-peaked head, it will usher in a season filled with the kind of outdoor activities some locals dream about all the way through long, sticky summer nights.

A valley doesn’t come without peaks, and for those who love the feeling of racing down a mountain, the area has a stellar variety of options for alpine skiing and snowboarding. Windham and Belleayre are popular both among locals and those from as far away as New York City, and so are Hunter Mountain and Catamount Ski, both of which are celebrating anniversaries in 2009.

Hunter Mountain began its 50th anniversary celebration last season, and will see it draw to a close with a party on January 9. But what’s kept Hunter so busy over the past half-century isn’t its party planning as much as its attention to detail. Long a destination for downhill skiers, the recent trend toward snowboarding didn’t pass Hunter Mountain by. Nor has the popularity of snowtubing, which gives outdoor enthusiasts an opportunity to soar down a slope at terrific rates of speed with the direction primarily dictated by a combination of course and gravity.

Snowtubing at Hunter Mountain has gotten so popular that they’re introducing 14 new snow guns to their park to ensure the best possible conditions. Elsewhere, Hunter will also add a further six snow guns this season. With the cold weather slower to arrive than in recent memory, those snow guns may get an awful lot of use.
“We’re still expecting an amazing season, but it’s off to a slow start,” says Jessica Pezak, Hunter’s director of communications. “It’s a bit balmy.”

Pezak said they’d hoped to be open by November 20, but it’s not beyond the realms of possibility that the beginning of December is where things might finally start to take off. Even so, Pezak said the long term forecast is for plentiful snow during the winter ski season.

“I did see a lot of markers pointing toward a lot of snow, mirroring the summer precipitation,” Pezak says.
When that snow does eventually fall, Pezak says visitors to Hunter Mountain will have an opportunity to enjoy a new approach toward training in the Snowsports School and Learning Center. According to Pezak, the “Progression” concept ensures that skiers and snowboarders of all levels have their skills more thoroughly assessed, allowing them to get more individualized training.

“It doesn’t matter what level you’re at, we’ll help find a trainer,” Pezak says. “We’re making it easier for people to improve.”

Like Hunter, Hillsdale-based Catamount is celebrating a milestone this season, with 70th anniversary celebrations and specials lasting throughout the year.

While the Frost Valley YMCA offers year round programs for lovers of the great outdoors, as their name indicates, they’re rather fond of the coldest months of the year. Karen Rauter, Frost Valley Y’s director of communications, says its location, tucked in the Ulster County hamlet of Claryville in the southwestern Catskills, gives it a natural winter feel, especially for fans of cross-country skiing.

“In a good snow year, we have more snow than others,” says Rauter. “The guys who’ve been working here will say it’s generally 5-6 inches more than what’s down in the valley. Cross-country skiing is what people really come to Frost Valley for because it’s private land. We have 20 miles at least of groomed and ungroomed land.”
But Rauter stresses that the Frost Valley Y is about much more than just cross country skiing, with family friendly options like snowtubing and the hockey-like sport of broomball. And with inexpensive lunch options, indoor arts and crafts, and a generally warm atmosphere, Rauter says the Frost Valley Y is a good option for the whole family or for individuals looking to make the most of the area’s natural wonders.

Another popular feature of the Frost Valley Y is its Maple Sugar House, a year-round natural maple syrup-making operation which tends to reach its apex the first three months of the year.

Other popular outdoor winter activities like snowshoeing and ice-skating can be done everywhere from the iconic Mohonk Mountain House in New Paltz to trails in the Esopus Bend Nature Preserve and the Kiwanis Ice Arena, both of which are located in Saugerties. Or, like many local residents, an outdoor adventure can be as simple as stepping out one’s own front door.

The terrifically named Wynter Kennedy is a manager of clothing and snowboarding at Kenco in Kingston. While the shop has long been a popular supplier of outdoor equipment, snowboarding is new to Kenco, and they’re taking to it in a big way.

“Snowboarding is new for us,” Kennedy says. “We’re pretty stoked about that.”

Also stoked are fans of the great outdoors, who Kennedy says have been stocking up on clothing and equipment since the beginning of October or earlier. Kennedy says the interest has risen since last year’s global economic meltdown, though he adds that the rough financial times didn’t hit winter fun as hard as it did other areas.

“Hiking and snowshoeing seem to be recession resistant,” he said. “It’s cheap, you don’t need tons of gear to do it. If you’re looking for something to do for the winter, buying a whole ski package is going to cost you a lot of money, whereas buying new boots to hike, or getting a sled is easier than going up to Smuggler’s Notch for the weekend.”

Paul Zajkowski, manager of Potter Brothers in Kingston, has also noticed interest rising among ski lovers.
“I think it’ll be as popular if not more so,” he says. “People are feeling good about what’s going on in the economy, and they’re going to go out and have a good time. But I think there’s still people out there that don’t realize you can get bargains when you ski.”

Potter Brothers tries to spread that word by offering a wide range of deals on both equipment and lift ticket packages, including “flex” days where the savings can sometimes be as much as half the price of any other day.
If you haven’t skied in a while, you might not even recognize it anymore. That’s because the recent explosion of shaped skis has taken over traditional models, and for both downhill and cross-country skiers, that means shorter is actually better.

“The shaped skis are still advancing,” says Zajkowski. “They’re much shorter, and they virtually carve the turns for you. The straight skis are just so far out of date that they’re not even worth mentioning anymore.”
Similar advances have been seen in cross country skis.

“Cross county skis have gotten shorter and wider,” Zajkowski says. “If you do attempt to turn, they’re easier to turn and much more stable. Boots have gotten a lot warmer, too.”

Kenco’s Kennedy says snowboards are also undergoing a design renaissance, where traditionally they were raised in the center, the trend is now toward keeping the middle down and raising either end.

Worries about he economy haven’t just been felt by outdoor equipment suppliers; destinations already at the annual mercy of Mother Nature have also wondered whether they’d see a dip in participation for financial reasons. But at Hunter Mountain, Pezak says the season looks to be a strong one. “Despite the economy, all of our sales are way up,” she says. “I don’t know if it’s people who usually travel farther and are staying closer to home, or if it’s a new interest in skiing, but it’s good.”

Zajkowski says he’s enthusiastic, both about sales and winter conditions. “Ask me in April, but I’m very optimistic,” he says. “I think it’s going to be a good year. And I would rather see it warmer early and stay cold once it gets cold, anyway.”

Kennedy says that as long as there’s winter weather in the area, people are going to enjoy it. “Winter’s not a time where you have to hide indoors,” he says. “A lot of people, they just want to get outside and spend time with their families.” 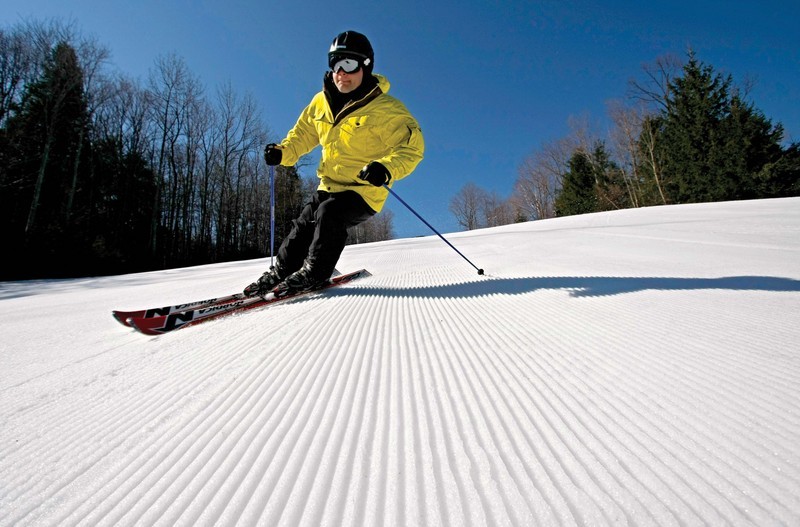 All Downhill From Here: 6 Upstate Ski Resorts to Schedule In