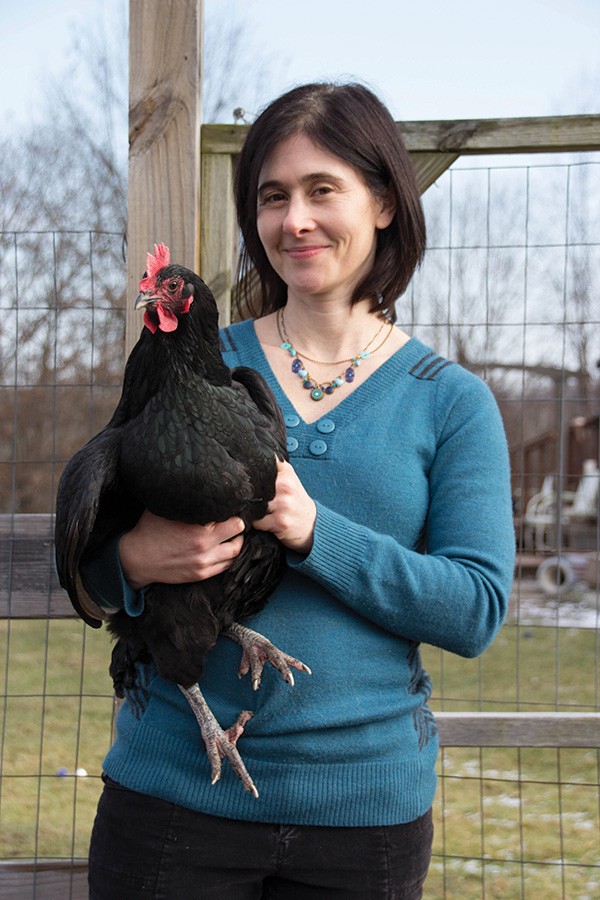 Winnie Abramson grew up in her parents' storied and influential restaurant, The Quilted Giraffe, which opened in New Paltz in the mid-`70s and moved to Manhattan a few years later, bringing new levels of hip refinement and glitzy gastronomy to the glitterati of `80s Manhattan. She and her brother helped out in the coatroom and kitchen some, but were left to their own devices a lot since their parents often worked until after midnight. Now 43, married and with two children, Abramson lives outside New Paltz, less than a mile from her childhood home but a world away from the bold-face names and lavish four-star trappings of that scene.

Because of her latchkey youth, Abramson made the decision to work from home so she could be with her children as much as possible. For the last five years, she has written Healthy Green Kitchen, a food and lifestyle blog that encourages readers to integrate scratch cooking and sound nutrition into their daily lives while encouraging pleasurable eating. Her new book, One Simple Change (Chronicle, 2013), originated in a year-long series of weekly blog posts she wrote to demystify her own journey towards health: bodily, but more importantly in her psychological relationship with food.

In the introduction, Abramson addresses her serious eating issues that arose during high school, and having broached the subject feels that there's more to say about it. "I say I dealt with disordered eating, but the reality is that I starved myself. There's no way to talk about it gently. I was impressionable, and I read magazines and books [during the 1980s] that insisted on a low-fat diet, so I thought that no fat would be even better. The real tragedy is that I didn't need to be on a diet to begin with, but I thought it was healthy." As a result, her health became seriously impaired: acne, depression, no menstrual cycle, thyroid and adrenal issues. She worked with a holistic doctor, who repaired her diet, and after college she went back to school, receiving her doctorate in Naturopathic Medicine so she could help others overcome similar issues.

A Journey of 50 Steps

The 50 chapters—one per step—are short and dense with information, specifically the conclusions she has reached rather than the research that got her there. The writing throughout is accessible and encouraging, and her tone avoids the sort of hectoring that is all too common in the genre. The steps in the book are based on the changes that Abramson made to return herself to health. "I would never tell someone to do something I'm not doing." Many of the steps will not be news to readers of this magazine: use green home cleaning products, shop at CSAs and farmers' markets, grow a garden and compost, eschew soda, get outside and exercise. Others might be surprising, like drink a glass of water every morning before consuming anything else to get your body running smoothly before introducing food or caffeine, don't skip meals, and reconsider your prohibition against meat if you have one. The first one, "Stop Dieting," is in many ways the most central to her message; calorie counting, obsessive self-weighing, and avoiding whole categories of food all do more harm than good.

Making the carrot soup recipe from the book in her sunny kitchen, which is both healthy and green (in the ecological sense: the cabinets, counters, and appliances all came from Green Demolitions), she expounds on her desire for balance. "We stress ourselves about our health, which negates the benefits. Don't let the perfect be the enemy of the good," she says, stirring onions sizzling in the pot. "Teenage girls don't eat because they want to look perfect, but perfection isn't real." Elimination diets, those calling for abolishing all carbohydrates, or all grains, or all dairy or sugar, make it extremely difficult to eat in a balanced way. "Some people won't even eat fruit, because it has sugar in it. It has no basis in science at all." She sees this phenomenon as being ironically similar to the oft-derided pill-popping approach to wellness, where there's one easy solution to whatever ails you. What ultimately made her mentally and physically well was embracing variety. "It's definitely true that you can feel better for a while on some of these diets, and it's natural to proselytize when you feel good. The problem is that after six months or a year they can start to make you sick."