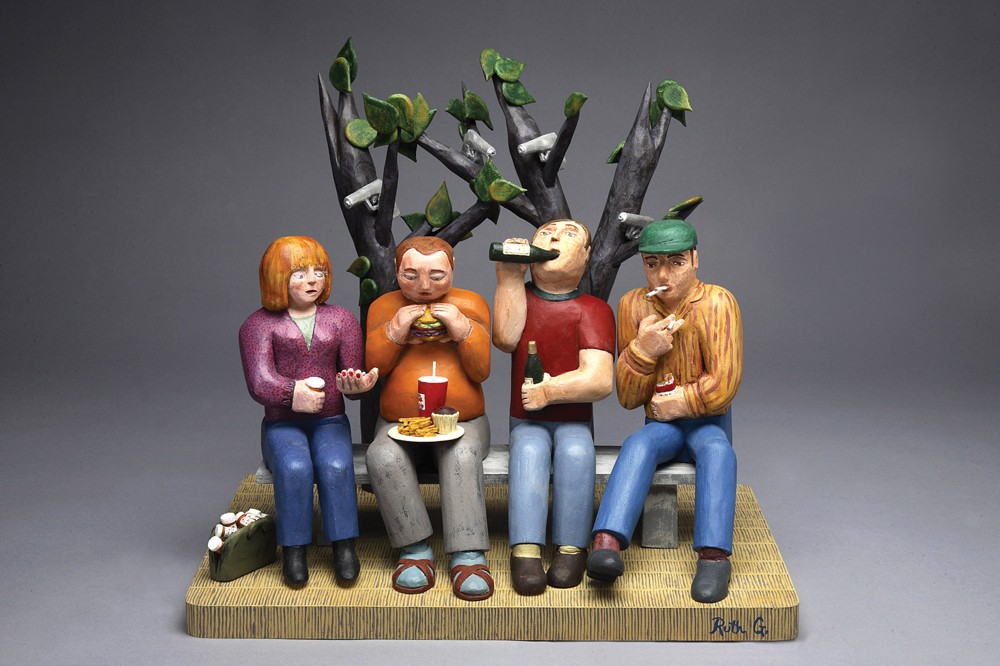 "I was asked by the Arts Council of Rockland to give a little talk on activism in art, and I thought: 'Who, me? I'm not an activist,'" says sculptor Ruth Geneslaw.

Nevertheless, two local venues rejected her piece Hands Up (Don't Shoot!) as being too controversial. The sculpture depicts six unarmed African-American men with targets on their backs being shot by three white police officers. Each of the six is an actual person, his face reproduced through the process of photo transfer. On the front of each victim is the story of the murder, taken from newspaper accounts.

Hands Up (Don't Shoot!) is in a virtual four-person art show, "The Long View," presented by the Arts Council of Rockland, along with Paula Madawick, Laura Shapiro, and Cassie Strasser.

Geneslaw is an outsider artist with two degrees in art, one of them from an Ivy League college (Columbia). For 20 years she was a fiber artist, making abstract wall hangings and larger freestanding sculptures. In 1988, her friends were startled when her art changed direction and she began whittling comical wooden figures. This was similar to Philip Guston's experience in 1970, when he abandoned abstract expressionism for cartoony paintings with social themes.

Geneslaw never studied carving, but she did take a woodworking course, to help with the accessories to her pieces. For example, The Cabinet, a depiction of the 15 faces of Donald Trump's original cabinet members, is an actual working cabinet, with swiveling doors—purposefully built on a slant, to show how crooked that whole gang was. The structure rests on a swamp, with a prominent golden snake and a discarded copy of the Constitution floating in the muck.

"Most artists give titles to their work long after they're finished," Geneslaw observes, "but it's actually the title itself that suggests the piece to me." Weapons of Mass Destruction (Pick Your Poison) shows four characters on a bench: a woman with a satchel full of pills, a man drinking two beers at once, a guy with an enormous hamburger—plus French fries, soda, and a cupcake. A fourth figure is smoking three cigarettes. In the body language of the four, Geneslaw captures the depressive comradeship fellow addicts share. Notice that she chooses very common societal vices, rather than heroin or crack. She wants us to recognize ourselves in these self-destructive figurines. The diorama operates like a joke. Instead of: "A Frenchman, an Englishman, and a Jew walk into a bar," there's "an alcoholic, a pill addict, a smoker, and an overeater sat on a bench..." The title suggests an irony: the US went to war over the mythical "weapons of mass destruction" in Iraq, while millions of Americans were destroying themselves with legal addictions at home. Geneslaw's art reminds me of protest songs of the 1960s like "The Times They Are a-Changin'" and "Universal Soldier." She is carving songs of outrage in wood.

While at work, Geneslaw is alert to the needs of a piece. For example, while making Dark Thoughts, a portrait of a woman whose head is literally exploding with anxieties—a crashed airplane, a tombstone, an article on climate change—she decided to add six forbidding crows at the woman's feet. Each sculpture takes Geneslaw months to complete.