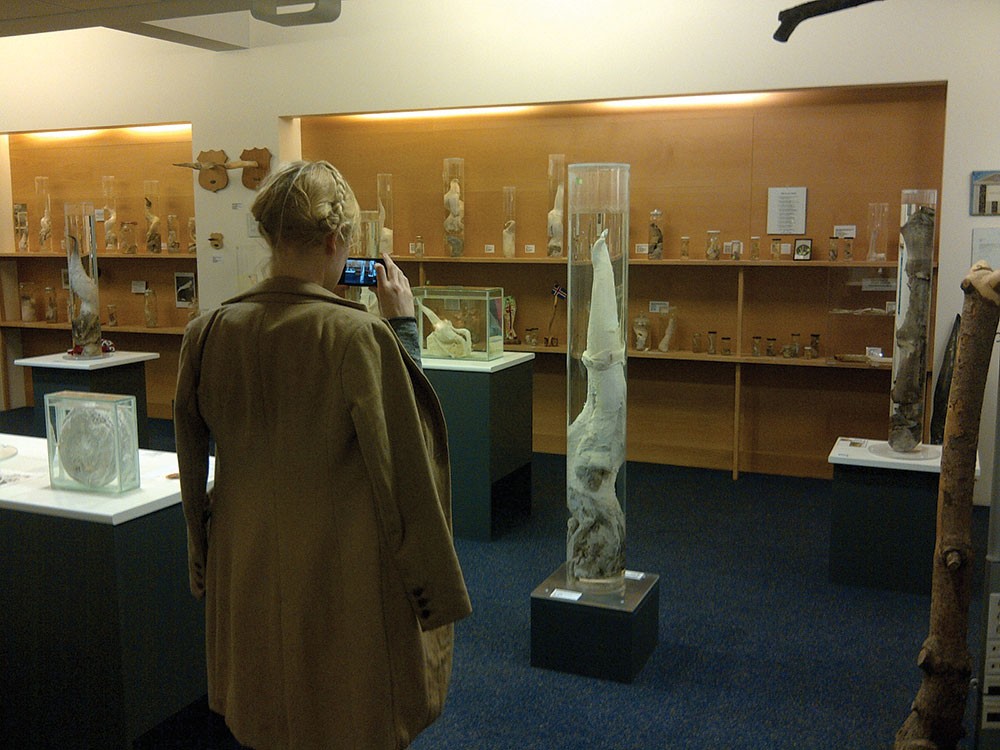 Reykjavik, Iceland, is home to the world's only penis museum, which is expected to draw 50,000 visitors by year's end. The collection of 286 penises could be misconstrued as a lewd curiosity, but the museum offers an educational experience. The collection provides a biological study through the variety and diversity in its specimens. Children under 13 get in free and tours by Icelandic school children are common. The Icelandic Phallological Museum opened its doors in 1997. Some of the organs on display include Icelandic and foreign mammals, a mythological corpse-eating cat, and a donation from an Icelandic man named Pall Arason. Four more men have committed to donate their penises, and the museum plans on expanding its collection.

A Pakistani woman had a grapefruit-size hairball surgically removed from her stomach in 2013, according to a British Medical Journal case study published this October. The hairball measured 15 by 10 centimeters; a smaller tail-shaped hair clump was removed from her intestines. She suffers from "Rapunzel syndrome," a medical condition that causes people to obsessively eat their hair. Most patients have been previously diagnosed with a psychiatric disorder called trichotillomania, or compulsive hair pulling, a rare disorder affecting only 1 to 2 percent of people worldwide.

New research from Princeton, the University of Rochester, and the University of Chicago has found that many young men without college degrees have chosen to live at home and play video games rather than work full time. In 2015, 22 percent of men between 21 and 30 years old with less than a bachelor's degree reported not working at all in the previous year, according to the White House's Council of Economic Advisers. Census Bureau time-use surveys show that 75 percent of time that young men had previously spent working is now spent playing video games. Though men with a more extensive educational background may be playing just as many games, they have an easier time finding jobs because of their degrees.

Drug users have become the largest and fastest-growing group of organ donors. More than 790 deceased drug users donated organs this year in the US, more than double the previous number of 340 drug-user donors, in 2010, according to the New England Organ Bank. In the United States, there have been 11,776 total donors this year as of the beginning of October, according to the United Network for Organ Sharing. "It's an unexpected silver lining to what is otherwise a pretty horrendous situation," said the Organ Bank's chief executive, Alexandra K. Glazier. Drug users have a higher chance of carrying HIV and hepatitis C, placing their organ recipients on a high-risk list for infection. But for some patients desperately needing a transplant, high-risk organs are better than nothing.

A report from the American Journal of Preventative Medicine has found repeated examples of soda industry supergiants Coca-Cola and Pepsi paying off influential health groups. Professor Michael Siegel and Daniel Aaron of the Boston University School of Public Health studied public records from 2011 to 2015, a time when cities were looking to combat the obesity epidemic by imposing soda taxes and regulations. They found that donations caused a "clear-cut conflict of interest" between health groups and corporations in the timespan, Aaron said. The American Heart Association received upward of $400,000 from Coca-Cola between 2010 and 2015. From 2011 to 2015, Coca-Cola more than $6 million per year on average to combat public health measures seeking to decrease soda consumption, and Pepsi spent $3 million per year.

An air strike in early October killed 140 Yemeni citizens, reigniting the debate over United States involvement in Saudi-Yemeni relations. The US State Department reviewed and approved $1.3 billion worth of munitions to Saudi Arabia last year. Saudi-led airstrikes have accounted for around 3,800 civilian deaths in Yemen, many of which occurred at schools and hospitals, according to the United Nations human rights office. Human rights groups like Oxfam International have stated that the US could be complicit in war crimes by supplying weapons to the Saudi military. The Saudis intervened in Yemen March 2015, as an attempt to restore order after Houthi rebels ousted President Abd-Rabbu Mansour Hadi.

The number of arrests for marijuana possession exceeded the number of arrests for violent crimes last year, and a disproportionate number of those arrested are African-American. A recent report, released by the American Civil Liberties Union and Human Rights Watch in the wake of the fatal police shooting of Keith Lamont Scott in Charlotte, found that law enforcement agencies made 574,641 arrests in 2015 for small quantities of drugs intended for personal use. This figure is around 13.6 percent higher than the arrests made for all violent crimes, like murder, rape, or serious assault, in 2015. Report writer Tess Borden found that although there has been a drop in crime rates over the past 20 years, including a 36 percent drop in violent crime arrests from 1995 to 2005, the number of arrests for all drug possessions has increased 13 percent. According to the report, black adults were more than four times as likely to be arrested than white adults for marijuana possession.

A neuroscientist claims he has found the happiest song on Earth. Researchers at the University of Missouri had already determined that songs that are upbeat in lyrical content and tone can positively impact a person's mood and mental health. Recently, British electronics company Alba had Jacob Jolij find the world's happiest song. Jolij studied 126 songs spanning 50 years, compiled from a UK-based survey of people's top "feel-good" song lists. He analyzed each song's beats per minute, key, theme, and lyrics. Two-thirds of the 2,000 people surveyed said that Queen's song "Don't Stop Me Now" was their favorite. "Dancing Queen" by Abba and "Good Vibrations" by the Beach Boys were runners-up.