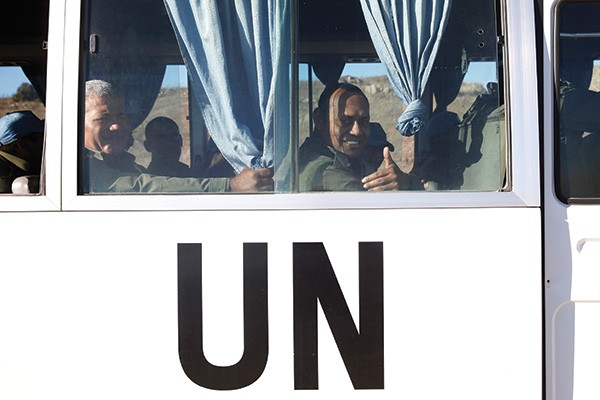 Forty-five Fijian UN peacekeeping troops were held captive for a month when Al Qaeda-affiliated Nusra Front militants invaded their outpost in the Golan Heights. The incident highlighted the underreported fact that while the UN calls upon the international community to respond in crises, soldiers from developing nations face the brunt of the burden. Troops from developing countries are more likely to be less trained, under supplied, and ill-equipped for the missions they are sent on. Simultaneously, the financial aid for these missions havs diminished, which has complicated the challenge. As of July, the five permanent UN Security Council nations (US, France, UK, China, and Russia) contributed 4 percent of the UN personnel, while the governments of Pakistan, India, Bangladesh, Fiji, Ethiopia, Rwanda, and the Philippines provided 39 percent of all UN forces.

When the video of Brooklynite Andre Robinson went viral in May, his recorded actions not only captured him punting a cat like a football over a metal fence, but also led to his arrest. Robinson has now found himself at the center of a growing debate on how the justice system handles animal cruelty cases. Animal activists have risen to the cat's defense by continuously attending Robinson's court hearings, gathering support via social media, and utilizing funding to raise global awareness on the issue. In the past, criminal penalties for animal cruelty have generally been minor, but as the activists' voices become louder, those convicted of animal cruelty are facing stiffer fines and jail time.

Currently at 11.5 million barrels a day, the US production of liquid petroleum will likely surpass Saudi Arabian production and become the world's largest supplier by 2015. This rise in oil may has shrunk the US trade deficit in energy and stabilized international markets by decreasing the global crude prices in the past two years, but it has also started a wave of investment in petrochemicals an other related industries such as fracking. New pipelines and drilling sites have popped up across the US and Canada, contributing to this increase in world oil supplies, but have simultaneously added to long-term environmental concerns.

Federal judge Kimberly Mueller dismissed a lawsuit brought up by the State of Missouri against the State of California over an impending law that will require all out-of-state egg producers who want to sell their eggs in California to meet the specific housing requirements for egg-laying hens. Most eggs in the US come from "battery cage" hens. These hens are often confined to a cage with 5 to 11 other hens in it. Hens spends the entirety of their 18-to-24-month lifespan unable to turn around or stretch their wings. California requires all hens to be kept in coops that have enough space to for hens to stand up, lie down, and extend their wings. Missouri Attorney General Chris Koster argued that the law violated the Constitution's interstate commerce clause. In 2010, Missouri and five other states, including Alabama, Kentucky, Iowa, Nebraska, and Oklahoma, sought to overturn the same law, but Mueller dismissed the lawsuit since it only harmed a small subset of egg producers. Producers outside of California are not required to build new facilities, but if they don't comply with the state's standards, they are unable to sell their eggs in the Golden State.

The populations of non human vertebrate species such as mammals, birds, reptiles, amphibians, and fish have dropped by more than half over the last 40 years according to the World Wildlife Fund's Living Planet Report, a comprehensive study of planetary health released every two years. The report's Living Planet Index, which measures more than 10,000 representative populations of mammals, birds, reptiles, amphibians, and fish, has declined by 52 percent since 1970.

Strike Debt, a New York-based activist collective and subset of Occupy Wall Street, announced in mid-September that the organization had abolished $4 million worth of student loan debt as part of its Rolling Jubilee Program. The debt was bought from for-profit Everest College, part of the Corinthian College network. Strike Debt claims that the students at Everest were conned into pricey vocational programs and encouraged to take federally backed student loans as a way to pay for them, thus funneling money from public to private hands and constructing a business model that resembles legal theft. For-profit colleges make up the fastest-growing segment of higher education, accounting for 20 percent of the two-year associate's degrees granted in the United States, up from 8 percent two decades ago.

Cities and towns in several states have passed bans on the sales of puppies in retail pet stores, legislation aimed at cracking down on substandard, large-scale puppy breeders. Large-scale breeding operations often place monetary value over the animal welfare, though all breeders are subject to annual USDA inspections. But animal welfare activists, like Cori Menkin of the ASPCA's Puppy Mills Campaign, say the inspections are flawed because of lax federal regulation. "The regulation of breeders is so poor that all it really does is give consumers and the general public a false sense of security that their dogs are coming from a humane environment when they're not," Menkin says. The the laws are intended to encourage smaller pet stores to follow the lead of national chains like Petsmart, Petco, and Pet Supermarket. None sell dogs, but instead promote adoptions through shelters and rescue groups.

Of the 11 uterus transplants that have been conducted worldwide, no live births were successful until recently. At age 15, a Swedish woman who was born without a uterus was told by doctors that she'd never be able to carry a child of her own. At age 36, the woman has become the first to give birth with a transplanted womb. Prior to the transplant, the woman was provided with in vitro fertilization, while her ovaries were intact and able to produce eggs. A 61-year-old woman who had already experienced menopause donated her uterus, which allowed the woman to deliver the baby by cesarean section. It has been reported that the woman took a trio of immunosuppressant medications such as Tacrolimus, Azathioprine, and Corticosteroids; to avoid long-term damage from those medications she'll need to either try for another pregnancy or have the womb removed. Doctors who pioneered the technique claim the procedure may begin a new wave of opportunity for women are who are unable to give birth on their own.