by Lisa Parisio and Siobhan McBride


Bolivian president Evo Morales claimed the modern diet is to blame for “deviations” such as homosexuality and baldness. Labeling baldness a “sickness,” Morales said widespread European baldness is due to their diet, as is homosexuality—which he blames on the female hormones used to mass produce chickens for consumption. At the People’s World Conference on Climate Change and the Rights of Mother Earth in Tiquipaya, Bolivia, Morales warned that “within 50 years everyone will be bald.” Morales also claimed Coca-Cola has damaging health effects and in early April, a government-backed alternative went on sale in Bolivia called Coca-Colla (after Bolivia’s indigenous peoples). This alternative is made from the cocoa leaf which has been used for centuries as medicine, and is also the base ingredient for cocaine. Coca-Cola’s original recipe included cocoa leaves.
Source: Irish Times

George Alan Rekers, famous antigay activist, Baptist minister, and author of books such as Growing Up Straight: What Families Should Know About Homosexuality, was spotted with a homosexual escort from Rentboy.com in Miami International Airport. When questioned, Rekers admitted he met the 20-year-old on Rentboy.com, a website featuring homosexual prostitutes for hire, but claimed he paid the escort for his 10-day European vacation to help him carry his luggage due to a recent surgery. He says he didn’t learn that his “rent boy” was a prostitute until halfway through the trip.
Source: Miami New Times

The American Lung Association released its “State of the Air 2010” report in May.  The ozone levels in Putnam, Orange, and Dutchess Counties all received the failing grade of F. Ulster County was the only Hudson Valley county that passed ozone tests, receiving a C. Ozone, otherwise known as smog, is the most widespread air pollutant.
Source: Mid-HudsonNews.com

Concord, Massachusetts voted to ban all sales of bottled water at a town meeting on April 22. Although over 100 municipalities in the US have offered to limit the amount of bottled water sold within their borders, Concord is the first in the country to ban all sales of the product. Jean Hill, an 82-year-old activist, led the effort, spending months canvassing neighbors and lobbying local officials as to how “discarded bottles are damaging our planet, causing clumps of garbage in the ocean that hurt our fish and creating more pollution on our streets.” According to a study by the Container Recycling Institute, 88 percent of plastic water bottles are not recycled, meaning approximately 30 million bottles are discarded every day, nationwide. In response, the Massachusetts Food Association, representing the state’s groceries and supermarkets, stated that “bottled water is used in times of need, often in natural disasters.’’ West Concord Supermarket owner Paul Mandrioli said, “It will take away a little business, but we’ve survived a lot more, and a lot worse. The majority spoke.”
Source: Boston Globe

New research has shown that weighing an extra 10 to 15 pounds may actually be beneficial. Those who are overweight are no more likely than those at at their ideal weight to die from cancer or cardiovascular disease according to studies conducted in 2005 and 2007 by the American Medical Association. An Australian study, published in the Journal of the American Geriatrics Society, found that overweight people in their seventies were less likely to die in a 10-year time span than those of normal weight, suggesting a few extra pounds might help against illness and injury. Doctors are also saying that being 10 pounds overweight could help stave off osteoporosis since subcutaneous fat produces estrogen, which strengthens bones. And a little extra fat may act as a natural face lift, providing more structure for the skin and preventing sagging. As they age, women who are overweight often look younger than other women.
Source: The Wall Street Journal

The Democratic Republic of Congo is “the rape captial of the world,” according to a senior United Nations official—more than 8,000 women were raped during 2009. Margot Wallstrom, the UN’s special representative on sexual violence in conflict, says the extreme number of cases is due to lack of enforcement of the law protecting women in the DRC. The UN mission has been escorting women to market in an attempt to minimize the problem, but according to a report by the Harvard Humanitarian Initiative done in April on sexual violence in the DRC’s eastern South Kivu province, 60 percent of rape victims in South Kivu were gang raped by armed men, more than half of the rapes took place in the victim’s home, and a growing number of attacks are being perpetrated by civilians.
Source: BBC

Researchers in Italy and the UK have discovered that getting less than six hours of sleep per night over a 25-year period resulted in a 12 percent increased likelihood of early death. Sixteen studies were done on the subject and scientists described the findings as an “unequivocal link.” Previous work suggested a lack of sleep was connected with diabetes, heart disease, and obesity. Simultaneously, the studies indicated that too much sleep isn’t healthy either. Professor Francesco Cappuccio, head of the Sleep, Health, and Society program at the University of Warwick, explained the difference: “Whilst short sleep may represent a cause of ill health, long sleep is believed to represent more an indicator of ill health.” Cappuccio believes sleep habits should be considered significant indicators of poor or good health and can be improved through education, counseling, and public health efforts. In general, the studies concluded sleeping six to eight hours each night will result in maximum health.
Source: Guardian (UK)

In April, Senator Blanche Lincoln (D-AR), the chairwoman of the Agriculture Committee, introduced a provision to the Senate’s financial regulatory reform bill that banks would have to choose between derivatives trading and federal protection. Derivatives (also known as hedging) are contracts designed to reduce risk and were a significant player leading up to the global financial crisis. Since most trades are done privately, comparing prices or implementing regulations are near impossible tasks. Starting in April, JPMorgan Chase, Goldman Sachs, Bank of America, Citigroup and Wells Fargo, the nation’s five largest banks and profit-makers in the derivatives market, have unleashed a torrent of lobbyists in Washington. In the first quarter alone, these banks spent $6.1 million on 130 lobbyists, including 40 former Senate staff members and retired Senate Majority Leader Trent Lott. The Obama administration’s financial legislation would require derivatives trading to be public and more transparent, arguing that this will make the market both cheaper, safer, and less vulnerable to another financial disaster. The Office of the Comptroller of the Currency reports that derivatives trading amounted to $22.6 billion last year.
Source: The New York Times

The Bureau of Economic Analysis reports federal, state, and local taxes are the lowest they’ve been since 1950. In 2009, taxes only took out 9.2 percent of personal income in comparison to the average 12 percent per year over the past 6 decades. In December 2009, the tax burden bottomed out at 8.8 percent. Reasons for the drop in taxes include less sales tax (since consumers aren’t spending as much since the onset of the recession), slashes in income taxes under the Clinton and Bush administrations, and the Obama administration’s stimulus law. Overall, taxes have been cut 23 percent during the recession while personal income has only dropped by 2 percent.
Source: USA Today 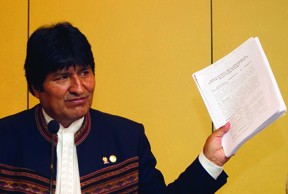