While You Were Sleeping: October 2011

September 28, 2011
comment
The mass layoffs and home foreclosures in late 2008 and early 2009, at the peak of the recession, spiked food stamp use by 70 percent, a trend that is expected to continue. The Food Stamp Program cost taxpayers $68 billion last year. Although some economists advocate that the program helps the economy by allowing for people to spend money on gasoline and retail in general, many taxpayers are currently not keen to put food on other people’s tables at their own tables’ expense.
Source: NPR

According to Christopher Shays and Michael Thibault, who headed the bipartisan Commission on Wartime Contracting in Iraq and Afghanistan, in the last decade over $30 billion of spending for contracts and grants in Iraq and Afghanistan has been wasted through poor planning, vague and shifting requirements, inadequate competition, substandard contract management and oversight, lax accountability, weak interagency coordination, and subpar performance or outright misconduct. Forty million was spent on an unwanted and unfinished Iraqi prison and $300 million on an unstable and underfunded Kabul power plant. Shays and Thibault offer 15 strategic recommendations for improved government contract spending at www.wartimecontracting.gov.
Source: Washington Post

A new scientific study provides an explanation for why getting home always seems to take less time than getting to an initial destination. Niels van de Ven, a psychologist at Tilburg University in the Netherlands, has discovered the psychological phenomenon known as the “return trip effect,” or the positive feeling that people have upon returning home that gives the illusion of speeding up their travel time. His theory is that the trip back seems shorter because it’s more familiar, but van de Ven acknowledges that this is only one of many causes for the effect. Some psychologists, like Richard A. Block of Montana State University, think that the trip home seems shorter because there’s less pressure to reach the intended target on time.
Source: NPR

Local and state governments cut 203,321 more full-time equivalent employees in 2010 than in 2009 and 27,567 more part-time employees, according to the Census Bureau. Rhode Island severed the most city, town, and county full-time jobs, where the municipal workforce shrank 7.7 percent. California municipalities shed the most part-time employees at 47,620 jobs lost. Idaho and Connecticut lost 5 percent of their state workforces. Although states like Wisconsin increased their state government part-time workforces by 5,063 jobs, Florida shed the most state government part-time positions—a 7.5 percent decrease—which translates to cutting 3,555 jobs. “We are looking at the worst contraction of state and local government employment since 1981,” said John Lonski, chief economist for Moody’s Capital Markets Research.
Source: Reuters

A recent study published in the Lancet indicates that Weight Watchers is more effective than advice from doctors. After tracking 772 overweight and moderately obese people, researchers found that dieters following Weight Watchers were likelier to stick to their diet and shed more than twice as many pounds as those following weight-loss guidance from their primary care doctors. The motivation and accountability that Weight Watchers provides fuels its effectiveness, according to a study funded by Weight Watchers as well as an independent research team. As opposed to a one-on-one compliant interaction with a physician, Weight Watchers offers a networking component—it connects dieters via weekly meetings. According to registered dietitian Dawn Jackson Blatner, author of The Flexitarian Diet, “It’s important to have people who will pick you up when times are tough and cheer you on when you have successes.”
Source: US News & World Report

The UK, the US, and Canada all currently ban gay men from donating blood, a policy first adopted in the '80s, when officials feared AIDS could be spread in such a manner. After a recent review where the UK found no evidence to support the ban, November marks the implementation for its lifting by British health officials. However, there is one condition—the ban will be lifted as long as the last sexual contact with another man exceeds one year to date. Other countries including Australia, Japan, South Africa, Sweden, and New Zealand allow gay men to donate blood under similar conditions.
Source: CBS News

According to the recently released National Survey on Drug Use and Health, nearly 9 percent of the population, an estimated 22.6 million people, abused prescription drugs or regularly used cannabis, cocaine, heroin, hallucinogens, or inhalants last year. Compared to 5.8 percent in 2007, pot increased in popularity in 2010 at 6.9 percent—or 17.4 million regular users, many of whom are underage. Approximately half of minors, ages 12 to 17, said it would be “fairly easy” or “very easy” to get marijuana, while one in five made similar statements about getting cocaine, and one in 10 about attaining heroin. However, parents didn’t seem to know, according to a study in Pediatrics—9.6 percent of parents surveyed thought their teenager consumed alcohol, while 25 percent of teenagers admitted to drinking. Similarly, 9.5 percent of parents thought their teenager smoked cannabis, while 17 percent of teens admitted to smoking it.
Source: US News & World Report

Health officials estimate that approximately 366 million people worldwide currently suffer from diabetes. According to a study published last June in the medical journal The Lancet, the global number of diabetes sufferers has more than doubled in the last three decades. Health systems spend $465 billion annually fighting the disease, which causes an estimated 4.6 million deaths every year. The International Diabetes Federation, an umbrella organization that represents associations from more than 160 countries, reported that one person dies from both Type 1 and Type 2 diabetes every seven seconds. These figures were released in Lisbon during a meeting where world leaders discussed a global plan to fight diabetes. “The clock is ticking for the world’s leaders,” stated the federation’s president, Jean Claude Mbanya, “We expect action from their meeting next week at the UN that will halt diabetes’s relentlessly upwards trajectory.”
Source: Associated Press

According to recently released US Census data, the poverty rate rose to 15.1 percent last year—its highest level since 1993. This estimates that 46.2 million people are now considered poverty-stricken, 2.6 million more than last year. Moreover, the poverty rate increased to 22 percent for minors last year, meaning more than one in five children are living in poverty. Nearly one third of families headed by single mothers already live in or below poverty. The South has the highest poverty rate at 16.9 percent, where Mississippi households were the poorest in the country with a median income of $37,985. The Northeast had the lowest rate at 12.8 percent, where New Hampshire households had the highest median income at $66,707. The poverty rate was 13.9 percent in the Midwest and 15.3 percent in the West. The Office of Management and Budget updates the poverty line each year to account for inflation, defining the it this year as $22,314 a year for a family of four and $11,139 for an individual. Since the income used to calculate poverty status does not include capital gains, theoretically, millionaires could qualify as poor if they lived solely by selling off investments.
Source: CNN 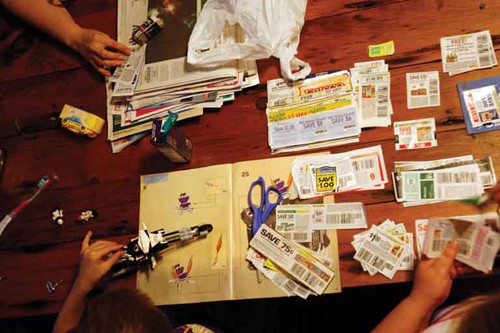