While You Were Sleeping: March 2013 | National | Hudson Valley | Chronogram Magazine

While You Were Sleeping: March 2013 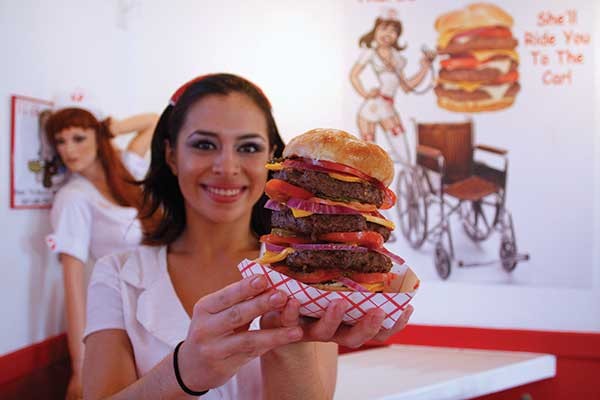 John Alleman, a loyal patron of Las Vegas's Heart Attack Grill, died of a heart attack on February 11. Alleman, a nighttime construction site security guard, had a heart attack while waiting for a bus in front of the restaurant. Known as "Patient Joe," the 52-year-old unofficial spokesman's likeness appears on the restaurant's menu and clothing line, which features a cartoon version of Alleman donning a hospital robe. Heart Attack Grill has suffered this type of loss before. In March 2011, Blake River—the restaurant's 575-pound, 29-year-old spokesman—died, and in February 2012, a patron suffered a heart attack while eating a Triple Bypass Burger.
Source: CNN

The United States Postal Service is losing $25 million per day. After losing nearly $16 billion last fiscal year, the USPS raised the price of the first-class stamp one penny to 46 cents. The agency has tapped out its line of credit with the US Treasury and could run out of money "between six months and a year at most," said Richard Geddes, associate professor of policy analysis and management at Cornell University. The Postal Service said their priority is to keep delivering mail even if that means defaulting on its retirement benefit funding again, which would be added to the $11.1 billion they already owe for future retiree funds. Currently the agency is required to deliver mail six days a week and maintain nearly 32,000 post offices. At the beginning of February, the Postal Service announced they planned to eliminate Saturday mail service by August, which would save them $2 billion a year. "Our financial condition is urgent," Postmaster General Patrick R. Donahoe said. "This is too big of a cost savings for us to ignore." Despite this announcement, the Postal Service cannot cut services without congressional approval, which they haven't received yet.
Source: NBC, New York Times

A Virginia court has ordered Tawana Brawley's employer to garnish her wages to pay $431,492—including interest—in restitution to Steven Pagones, the man she falsely accused of kidnap and sexual assault. In 1987, Brawley, a 15-year-old African American girl from Wappingers Falls, went missing for four days and accused six white men, including one police officer, of rape. Brawley lost the defamation lawsuit to Pagones over a decade ago and has been living under the name Tawana V. Thompson Gutierrez. According to Pagones's lawyer Garry Bolnick, Brawley left Dutchess County in 1998, then changed her name and Social Security number to avoid paying the $189,926 she owed his client. "We have never given up on tracking her down," Bolnick said. "She couldn't keep a job [or] we'd garnish her wages. She couldn't stay in one place very long."
Source: Poughkeepsie Journal

For the first time in Spain, wind farms have produced more electricity than any other power source. Grid operator Red Electrica de Espana, the Spanish Wind Energy Association, said the country delivered over six terawatt hours of electricity from wind farms in January. "The last time any technology exceeded six terawatt hours of monthly generation was in 2010, when it was combined-cycle gas turbines," the group said. In an effort to cut the country's carbon emissions, Spain's government has tried to boost their wind power capacity. Since November 1, wind energy has exceeded the output of nuclear and coal-fired power stations, and now contributes a quarter of Spain's total power generation.
Source: Guardian (UK)

According to the Congressional Research Service's new report, over the past 30 years, the federal prison population went from 25,000 to 219,000 inmates, which is an increase of nearly 790 percent. The report found a growing number of juveniles and elderly people being incarcerated for charges related to immigration violations, weapons possession, and "relatively paltry drug offenses." Due to overcrowding, the federal prison system operated at 39 percent over capacity in 2011, which led to price overruns—the Bureau of Prisons budget doubled to nearly $6.4 billion, while hundreds of millions of infrastructure problems went unaddressed. Last year, lawmakers in 24 states adopted policies that could help downscale prison populations, according to a new report by the Sentencing Project, a Washington advocacy group. The group found that "mandatory minimum" sentencing, or required prison sentences for certain crimes, could contribute to overcrowding. Seven states repealed mandatory minimum regulations last year. Recently Senator Patrick Leathy, head of the Senate Judiciary Committee, said he supports the complete elimination of these federal minimums.
Source: Inter Press Service

The UN revealed the cost of corruption in Afghanistan rose to $3.9 billion, with half of all Afghans bribing public officials for services in 2012. According to a joint survey by the UN Office on Drugs and Crimes and Afghanistan's anticorruption unit, the number of adults who made at least one bribe is down 9 percent from 2011. However, the total costs of the bribes has increased 40 percent, which is double the amount of service-providing revenue collected by government. The UN found education to be one of the most vulnerable sectors, with 51 percent of Afghans bribing teachers in 2012—as opposed to 16 percent in 2009—in exchange for better exam results and providing the exam contents. Afghanistan, alongside North Korea and Somalia, was ranked at the bottom of Transparency International's 2012 corruption index, which scores countries based on perceived levels of public sector corruption. The UN found that one-fifth of Afghans who paid bribes reported them to authorities—such as the police, the public prosecutor's office, and the Afghan High Office of Oversight and Anti-Corruption—but a majority of the claims did not result in follow-ups.
Source: Yahoo

During the economic recovery, incomes rose for the top 1 percent of earners, but not for anybody else. From 2009 to 2011, the wages of the top 1 percent rose by 11.2 percent, while the other 99 percent's earnings declined by 0.4 percent—widening the income gap by 1.7 percent, according to Emmanuel Saez, an economist at the University of California Berkeley. The wage disparity can be attributed to the fact that the wealthy have benefited from the four-year stock market boom, while high unemployment has hindered lower-income earners. In 2011, not counting investment gains earnings, the top 10 percent of earners made 46.5 percent of all income, which is the highest proportion since 1917, according to Saez. When accounting for inflation, the median income for average working families has declined over the last two years. During President Obama's State of the Union Address on February 12, he addressed the wage inequality and proposed raising the federal minimum wage from $7.25 to $9, which could raise the earnings of 15 million low-income workers by the end of 2015.
Source: New York Times

The number of New York State employees earning more than $100,000 increased 13 percent and those making more than $200,000 rose 37 percent from 2011 to 2012. The number of employees at SUNY New Paltz earning more than $100,000 increased from 61 to 74, or 21.3 percent. Fifteen of the top 20 state salaries in 2012 were employees at SUNY Downstate Medical Center, which was criticized for mismanagement last month in the state comptroller's audit. The state's top earner was Antonio Alfonso, professor and head of surgery, who made nearly $1.1 million in 2012, compared to $776,000 in 2011. SUNY officials said their top doctors' salaries are funded mostly through clinical income, not taxpayer money. According to a report by the Empire Center for New York State Policy, nearly 1,500 employees earned more than Governor Cuomo's $179,000 salary in 2012, which is up 33 percent from 2010. In 2012, about 14 percent of state employees earning more than $100,000 worked for the state police, about 3,800 officers. Union officials said these high salaries are not the norm and that the average state government union worker earns about $40,000 annually. "The vast majority of jobs in state service don't pay even close to six figures," said Stephen Madarasz, spokesman for the Civil Service Employees Association.
Source: Poughkeepsie Journal