While You Were Sleeping for June 2016 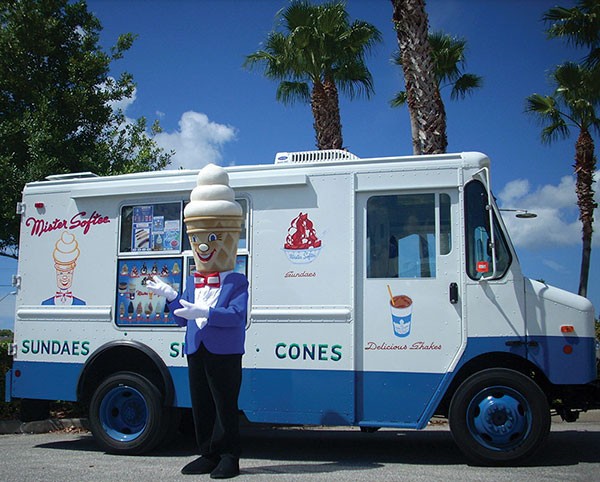 The Mister Softee jingle inventor Lee Waas died on April 19 at age 94. Waas wrote the jingle in 1960 for the ice cream franchise's radio advertisements. He also produced other jingles for Holiday Inn and the Philadelphia Phillies. Mayor Michael R. Bloomberg of New York City attempted to ban the song in 2004 in an effort to decrease noise in the city. In 2005, a compromise was formed, allowing for the ice cream trucks to play the tune only while in motion. Earlier in 2002, a community court judge in Connecticut ruled that Mister Softee trucks could only play their song six times in a row on any given block, but the state court later decided the ruling was invalid.

In May, a 15-year-old boy from Quebec discovered a lost Mayan city. William Gadoury made the discovery by comparing star charts with satellite images. Gadoury theorized that the locations of the Mayan cities might correlate to Mayan constellations. He analyzed 22 Mayan star maps from the Madrid Codex and overlaid the star positions onto Google Earth images of the Yucatan Peninsula. The city Gadoury found once consisted of 30 buildings and an 86-meter pyramid. Named "Mouth of Fire" by the teenager, this city in the Mexican jungle is considered the fourth-biggest city of the Mayan empire.

Feld Entertainment, the production company behind Ringling Brothers and Barnum and Bailey Circus, has officially ended its elephant shows after 145 years. The entertainment group has battled with lawsuits—in 2014, the company won a $16 million settlement, and in 2011 the USDA fined it $270,000 for Animal Welfare Act violations when Mother Jones reported that the elephants were chained, whipped, and left in cages full of feces. Local governments have had the most direct impact on the circus. Los Angeles and Oakland both banned the use of bull hooks. Asheville banned elephant performances in its US Cellular Center. Along with the increasing public sentiment against the use of wild animals in entertainment, the bans implemented by local governments have been an obstacle for the circus's tour. As a result, 11 elephants were sent to the Ringling Brothers-run Center for Elephant Conservation in Florida. Animal rights activists question whether the lives of the elephants will improve in the Florida facility.

African-Americans are living longer. According to federal data, the suicide rate for black men has decreased between 1999 and 2014. Since the late `90s, infant mortality for blacks has dropped by roughly 20 percent—compared to the 10 percent drop in the white community. In 1990, whites were expected to live seven years longer. In 2014, the gap shrunk to 3.4 years—with the life expectancy being 75.6 years for blacks and 79 years for whites. The smaller gap can be attributed to the opioid crisis, which is more prevalent for whites. Samuel Preston, a demographer at the University of Pennsylvania, stated, "The gap is now the narrowest it has been since the beginning of the 20th century." At the beginning of the 20th century, life expectancy for blacks was 15 years less than for whites.

In early May, the Supreme Court refused to hear an appeal from the fast-food industry challenging Seattle's $15 minimum wage. The law, which took effect in April 2015, stated that businesses with more than 500 employees need to raise their minimum wage to $15 by 2018. Small companies have until 2021. The fast-food industry argued that it was unfair for Seattle to exclude local franchises of big companies like McDonald's and Burger King from the small companies that have three extra years. Franchisees argued the law treats them like they are corporations instead of small-business owners. The Supreme Court did not agree, concluding that Seattle's laws need to treat franchises as part of the larger company rather than as independent businesses.

According to the IRS, unpaid taxes amount to $458 billion annually. "It is absolutely unacceptable that the country has lost more than $400 billion over the past 10 years from corporations dodging their tax payments," said Senator Ron Wyden of Oregon, the senior Democrat on the Finance Committee. "This is money that would be put to good use shoring up critical programs such as Medicare. It's time the IRS put an effective tracking and auditing system in place to locate this lost money." The money is lost through a failure to file tax returns, or through the underreporting and underpayment of taxes. The IRS stated that enforcement efforts had recovered around $52 billion of the unpaid taxes. The agency commented, "Those who don't pay what they owe ultimately shift the tax burden to those who properly meet their tax obligations."

Isle de Jean Charles in southeastern Louisiana is gradually disappearing due to climate change—rising sea levels, stronger storms, increased flooding, harsher droughts, and changes caused by humans. Since the 1930s, an area equal to the size of Delaware has been lost from southern Louisiana. According to the United Nations University Institute for Environment and Human Security and the International Organization for Migration, between 50 and 200 million people could be displaced by 2050 due to climate change. In January, the Department of Housing and Urban Development announced grants to help communities adapt to climate change by building stronger levees, dams, and drainage systems. One of the grants would be used for the island: A $48 million grant would go toward moving the entire struggling community to a different location. The island is home to two Native American tribes—the Biloxi-Chitimacha-Choctaw and the United Houma Nation—of whom some members are reluctant to leave the area. Hilton Chaisson, a native to the land, said, "I've lived my whole life here, and I'm going to die here." Since 2002, three different resettlement plans have fallen through due to political complications.

At any given moment in the US, nearly 660,000 people are using cell phones or electronic devices while driving. In 2014, 3,179 people were killed and 431,000 were injured in motor vehicle accidents involving distracted drivers. Texting while driving has been banned by most states over the past seven years. To combat the rising numbers, legislators and public health experts intend to treat distracted driving like drunk driving. New York lawmakers have proposed the digital equivalent of the Breathalyzer—a roadside test called the Textalyzer. Using this device, a police officer could track the recent history on the phones of drivers. Additionally, a new group formed this year, the Partnership for Distraction-Free Driving, is petitioning to get social media companies like Facebook and Twitter to discourage multitasking by drivers.