While You Were Sleeping for January 2010 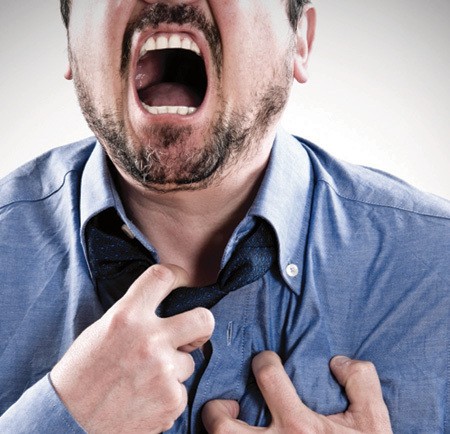 A study by the Stress Research Institute of Stockholm University and published in the Journal of Epidemiology and Community Health found that men who bottle up their anger at being unfairly treated at work are up to five times more likely to suffer a heart attack, or even die from one, than those who let their frustration show. The study followed 2,755 employed men who had not suffered any heart attacks from 1992 to 2003. At the end of the study, 47 participants had either suffered an attack or died from heart disease, and many of those had been found to be “covertly coping” with unfair treatment at work. (Covert coping was listed as “letting thing pass without saying anything” and “going away” despite feelings of being treated poorly by colleagues or bosses.) The researchers said they could not answer the question of what might be a particularly healthy coping strategy at work, but listed open coping behavior when experiencing unfair treatment or facing a conflict as “protesting directly,” “talking to the person right away,” “yelling at the person right away,” or “speaking to the person later when things have calmed down.”
Source: Reuters

For the past 17 years, world leaders have been trying to hammer out a deal on how to curb greenhouse gas emissions and halt climate change. Each year, they get together to try and hash out the details of the agreement. In December, 200 countries sent delegations to Copenhagen for the latest round of negotiations. The summit itself, from heating the convention facilities, to taxi rides around the city, to the electricity it takes to power the meetings, produced 40,000 tons of carbon dioxide. (Ninety percent of the emissions came from the airplanes delegates took to Denmark.) On average, Danes produce 10 tons of carbon emissions per person annually; Americans produce twice as much. The Danish government has agreed to pick up the tab, climate-wise, for the conference, and buy offsets for the total carbon emissions produced by the conference. It’s funding the building of fuel-efficient kilns to make bricks in Bangladesh. This will cost the Danish government $1 million.
Source: NPR


The US government put on hold its plans to sell most of its 34 percent stake in Citigroup in early December when wary investors offered to buy its stock for a mere $3.15 a share, 10 cents below the price the government paid for its 7.7 billion shares. The government agreed not to sell any of its shares for at least 90 days to calm nervous investors. Analysts said the lack of enthusiasm from investors could be a sign that Citigroup shouldn’t have been so quick to exit the Troubled Asset Relief Program. In other bailout news, the government agreed to allow Citigroup to forego billions of dollars in potential tax payments this week, an exception to longstanding tax rules pertaining to claiming past losses.
Source: Wall Street Journal

According to a study published in the December issue of Archives of Ophthalmology, near-sightedness is on the rise in the US. Researchers compared eyesight information from more than 4,400 people tested in 1971 and 1972 with data from another set of 8,300 people tested from 1999 to 2004. In the early 1970s, 25 percent of those examined were found to be nearsighted, while 42 percent of those examined three decades later received the same diagnosis. (The latter tests were conducted using the same technology available in the `70s to avoid a biased data comparison.) The cause of near-sightedness is poorly understood, though past research has linked hereditary disposition and excessive amounts of “near work”—tasks that require peering at written words or small objects—to the condition.
Source: Science News

Florida’s Judicial Ethics Advisory Committee recently ruled that judges may not “friend” lawyers on Facebook who may appear before them in court. The committee said, it creates the appearance of a conflict of interest, since it “reasonably conveys to others the impression that these lawyer ‘friends’ are in a special position to influence the judge.” Lawyers can, however, still declare themselves Facebook “fans” of judges, the committee said, “as long as the judge or committee controlling the site cannot accept or reject the lawyer’s listing of himself or herself on the site.”
Source: Legal Profession Blog

In late November, Swiss voters passed a referendum banning the construction of new minarets in Switzerland. The proposal had been put forward by the Swiss People’s Party, the largest party in parliament, which says minarets are a sign of Islamization. “This was a vote against minarets as symbols of Islamic power,” said Martin Baltisser, the Swiss People’s Party’s general secretary. Supporters of a ban claimed that allowing minarets would represent the growth of an ideology and a legal system—Sharia law—which are incompatible with Swiss democracy. Switzerland is home to some 400,000 Muslims and has just four minarets.
Source: BBC

Irving Picard, the liquidator for Bernard Madoff’s investment advisory business, asked a judge to approve $22.1 million in fees for him and his team with the law firm Baker & Hostetler. The fees, which include a 10 percent “public interest discount” from the firm’s normal rates, cover work performed on the liquidation from May 1 through September 30, according to a filing on November 20 in US Bankruptcy Court in New York. The fee request averages $4.42 million a month for five months of work, or about $210,476 per business day. Picard’s share of the fee request is $835,605, based on 1,198 hours of work on the case at a rate of $697.50 per hour. Picard spent 385 hours reviewing claims, 68 hours working on previously filed lawsuits, and 92 hours responding to press inquiries. Picard has recovered about $1.4 billion in assets for victims from Madoff’s purported $65 billion in holdings.
Source: Bloomberg News

Richard Branson’s Virgin Galactic, which has been developing commercial space travel over the past five years and just unveiled its spacecraft Enterprise, has signed Spandau Ballet to perform on the ship’s maiden voyage, making the New Wave band the first to perform in space. Approximately 300 people have already paid the $200,000 ticket price to reserve a seat on a future flight. Enterprise will reach a height of 65 miles above the earth during flight, and the passengers—there’s room for six aside from Spandau Ballet, their gear, and two pilots—will experience several minutes of weightlessness. Perhaps the band will play their 1984 UK hit
“I’ll Fly for You.”
Source: Daily Mail (UK)