Nothing is holier, nothing is more exemplary than a beautiful, strong tree," wrote German-Swiss author Herman Hesse in an essay that was posthumously published in the collection Bäume: Betrachtungen und Gedichte (Trees: Reflections and Poems). The Nobel winner and author of Siddhartha believed that by communing with trees, we could come to know ourselves.

You probably have your own local favorite trees, in parks or in your own backyard—as one does. But to truly appreciate Catskills trees in all their variety and majesty, there's no finer destination than the Mountain Top Arboretum, a 178-acre public garden situated at 2,400 feet of elevation just outside of Tannersville. Trails and boardwalks offer easy access to 35 species of native trees and the native plantings that thrive with them.

"It's a very different place from down in Woodstock," says Executive Director Marc Wolf. "We have meadows, ponds, hemlock forests—so many varied ecosystems. Geologists come and study the Devonian bedrock, there's a huge mountaintop marsh that feels more like the Adirondacks—just a huge expanse of wetland with birds, frogs, bears, all sorts of butterflies." 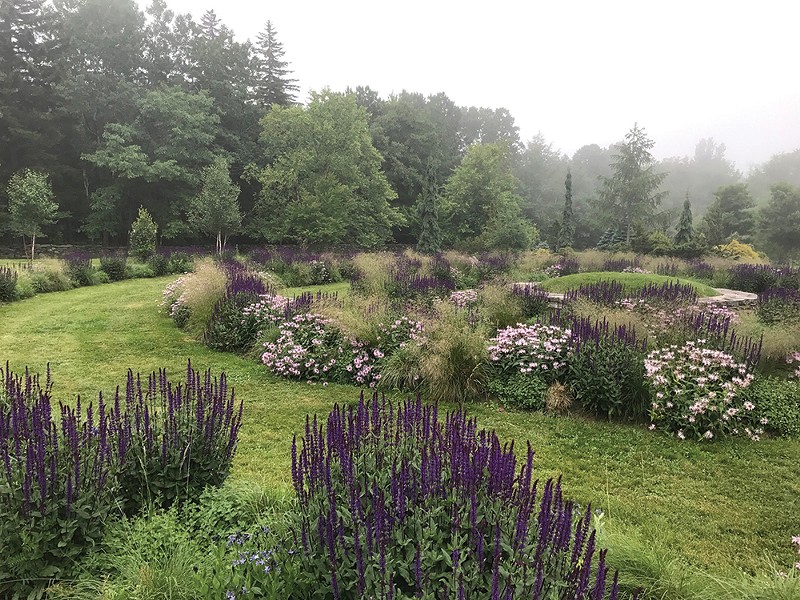 The Arboretum story begins with two second-home owners, Dr. Peter Ahrens and his wife Bonnie, a research physician and interior designer who purchased their summer place in Tannersville in 1948 and fell deeply in love with their surroundings. Claiming all the while to be humble amateurs, the couple began planting and studying all sorts of cold-hardy seedlings, "as if we were going to live forever," Bonnie once wrote. In 1977, they opened the Arboretum—then less than a tenth of its current size—to the public as a "sanctuary of trees and shrubs" and learning resource.

Educational programming began right away, so it seems likely that Peter and Bonnie would be as happy with the possibilities offered by the newly unveiled timber-frame Education Center as Wolf is—and he's ecstatic.

"This is the first time we've had offices onsite—the first building of any kind except for a maintenance barn," he says. "It's a big change for us. We can be more present for visitors, and we can do a lot more school programming now that we can be inside if the weather gets bad."

"You look at the ecosystem that exists, study what works well with that slope and drainage and so on, and start gardening that way. " click to tweet

The design, by world-renowned Berkshires timber-frame architect Jack Sobon, was realized using 21 distinct species of wood from the Arboretum grounds. "A group of about seven of us walked the property together and chose the trees for the building," Wolf says. "We had the timber-framer, the miller, the arborist. We chose trees from deep in the forest, far from the trail, or in a place where we're creating a new trail and cutting anyway. Specific trees were chosen for their particular branching patterns—there are things that oak can do as opposed to hemlock, for example."

Landscape architect Jamie Purinton of Copake designed the building's surroundings, including tree and shrub plantings and a system of six rain gardens. "All of it is in line with what the founders were interested in: cold-hardiness, land stewardship, and education," says Wolf. "You look at the ecosystem that exists, study what works well with that slope and drainage and so on, and start gardening that way. It's a cool time to visit because we've just planted 10,000 native seedlings near the new building, and you can see how something comes from nothing—with the aid of a lot of watering and fertilizing with mycorrhizal fungi."

The Education Center is a dream come true for Arboretum members, but it's hardly the first thoughtful touch added to make your visit a joy. Four distinct areas—West Meadow, Woodland Walk, East Meadow and Spruce Glen—feature trails and boardwalks, breaking the 178 acres down into 35- to 40-minute self-guided tours.

West Meadow is where you'll find the Bird Cove (although the entire property is a birdwatcher's paradise, harboring about 60 species) and a spiral labyrinth of native grasses. Along Woodland Walk, you'll encounter wildflowers, mountain laurel, a natural amphitheatre, and the Fairy Garden, where children are invited to create houses, forts, and gardens for the wee mythical residents using natural materials. The Spruce Glen walk takes you past the large Hidden Marsh and the ancient Emerald Bog.

"We're just starting to learn about all of this. They can't walk around so they've evolved other ways to communicate; it seems they cooperate a lot more than they compete." click to tweet

Arboretum staff are already working with teachers to expand the curriculum: pond, forest, and soil ecology; weather; geology; biology; and a host of other topics are beautifully illustrated by the surroundings. A writing workshop took place even before the building's grand opening, complete with poetry reading in the lobby. Educational opportunities and fun for the general public are ongoing this month: there's the biweekly Story Time in the Shade series, two evening programs—"Night Creatures: Scouting Bats and Moths" and an astrology evening with Bob Berman—and, on August 10, the annual Blues @ the Arboretum collaboration with 23Arts. This year, the blues showcase features Grammy-nominated saxophonist, composer, and bandleader Patrick Bartley, Jr.

But even on an ordinary day, you'll be in exceptional company at the Mountain Top Arboretum—the gracious and placid company of thousands upon thousands of well-loved trees. Besides the native and naturally occurring species, you will make the acquaintance of the ones imported from all over the world by Dr. Ahrens in his study of what else might thrive through the chilly Catskills winters, a project the Harvard-educated scientist found an interesting companion piece to his studies of cholesterol in the human body.

Wolf, who happened to be seeking a Catskills job when the Arboretum was looking for a horticulturist, stepped into the executive directorship in 2017 and says he never tires of the company of trees. "It's pretty crazy how little we know about what goes on six inches below our feet: the resource sharing, the mycorrhizal connection. Did you know plants emit scents that communicate to other plants when they're under attack by pests or disease, and trigger their neighbors' immune system into action? We're just starting to learn about all of this. They can't walk around so they've evolved other ways to communicate; it seems they cooperate a lot more than they compete." Seems like we could all take a cue from the trees.

The original print version of this article was titled:
"Where The Wild Things Grow"