Where the Doors are Always Open

Friendship, Food and (Of Course) Music in Woodstock 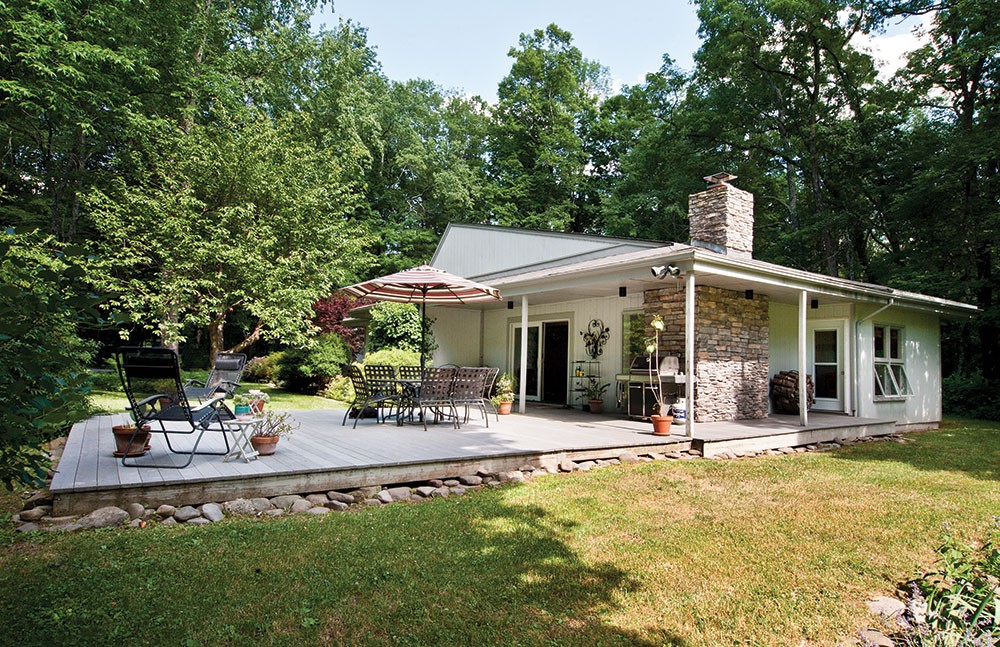 Abbe Aronson calls herself a sybarite. That is, according to Merriam-Webster, "a person devoted to pleasure." So, whether it's the pleasure of good food shared with friends, a field at sunset, or classic rock, Aronson revels in it. The heart and brains behind the PR and event business Abbe Does It, she finds pleasure in connecting people. She finds pleasure in being the nexus of an extended circle of friends who regularly gather at her home for dinner parties, pool parties, or any other occasion called for in the celebration of life. She also finds tremendous pleasure in the teenagers who have recently become a big part of her world.

Her home, a mid century modern ranch in the Riverby section of Mount Tremper, perfectly embodies this ethos. Slate-colored with a gabled roof, it harmonizes with the surrounding five-plus acres, like lyrics over a guitar riff. Inside the open, flowing, four-bedroom, two-bath home, everything, and everyone, has a place.

"When we found this house," Aronson tells me, "it was a dump. That was good: We wanted a place where we could leave our imprint." This was in 2004 and she was in transition -from magazine writer to full-time mother, from Manhattanite to Woodstocker- all the while volunteering as an event planner for causes -such as "God's Love We Deliver" and "Planned Parenthood"- close to her heart. The bones of the Riverby house reminded her of her Manhattan loft. Its open floor plan was ideal for entertaining and would allow for wall-to-wall carpets ("a pleasure in all four seasons," she tells me) and she loved the private master bedroom wing. She also loved the setting: Pastoral fields and two year round streams, all bordered the wooded, forever wild slopes of Mt. Tobias. 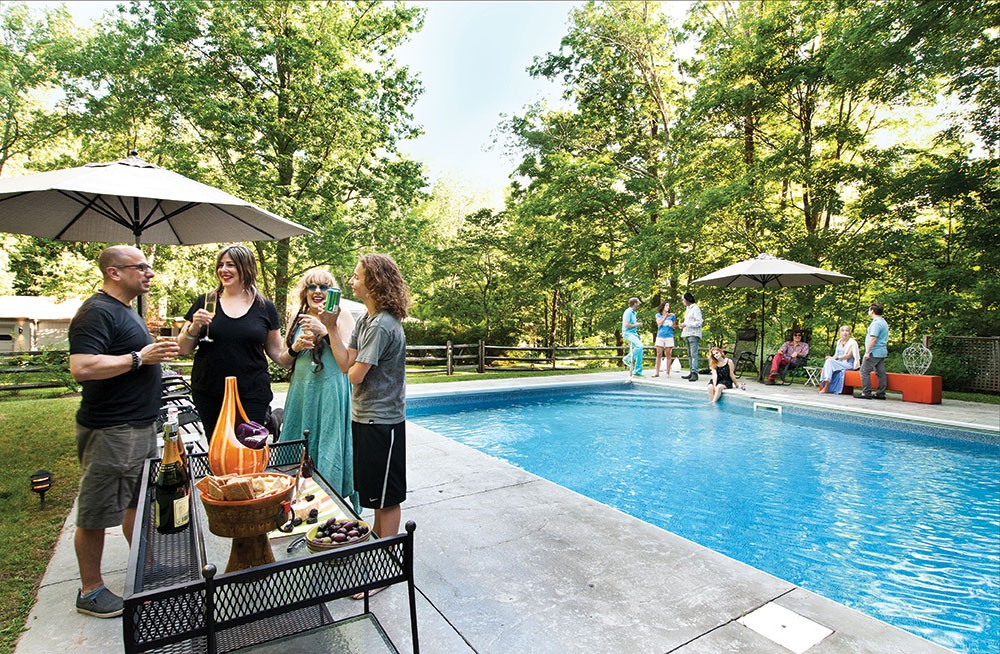 Still, the home required a complete reworking, from its top right down to its partly sunken foundation. She knocked down walls and added skylights. She refinished a yellow-painted fireplace with stone and installed a full chef's kitchen. She even eventually installed an in-ground saline pool. By 2006 Aronson and her son were living in the home full-time.

Throughout the house—in the living room, Aronson's bedroom, and her office—door-length cutout windows give the home an air of permanent invitation. The windows are original to the house and were saved through the remodeling by patiently raising the foundation a mere inch a day, making it seem as if her doors are always flung wide open. Figuratively, at least, they are: Aronson loves to entertain and intended to create a home where friends would gather and most everyone, young and old, would feel welcome. (And maybe, also, encouraged to play slightly naughty card games together.) "I love putting people together and I'm very house proud," Aronson says. "This is how I envisioned things when I moved here. I wanted this house to be central to our lives, and I wanted people to come here. It's worked out well." 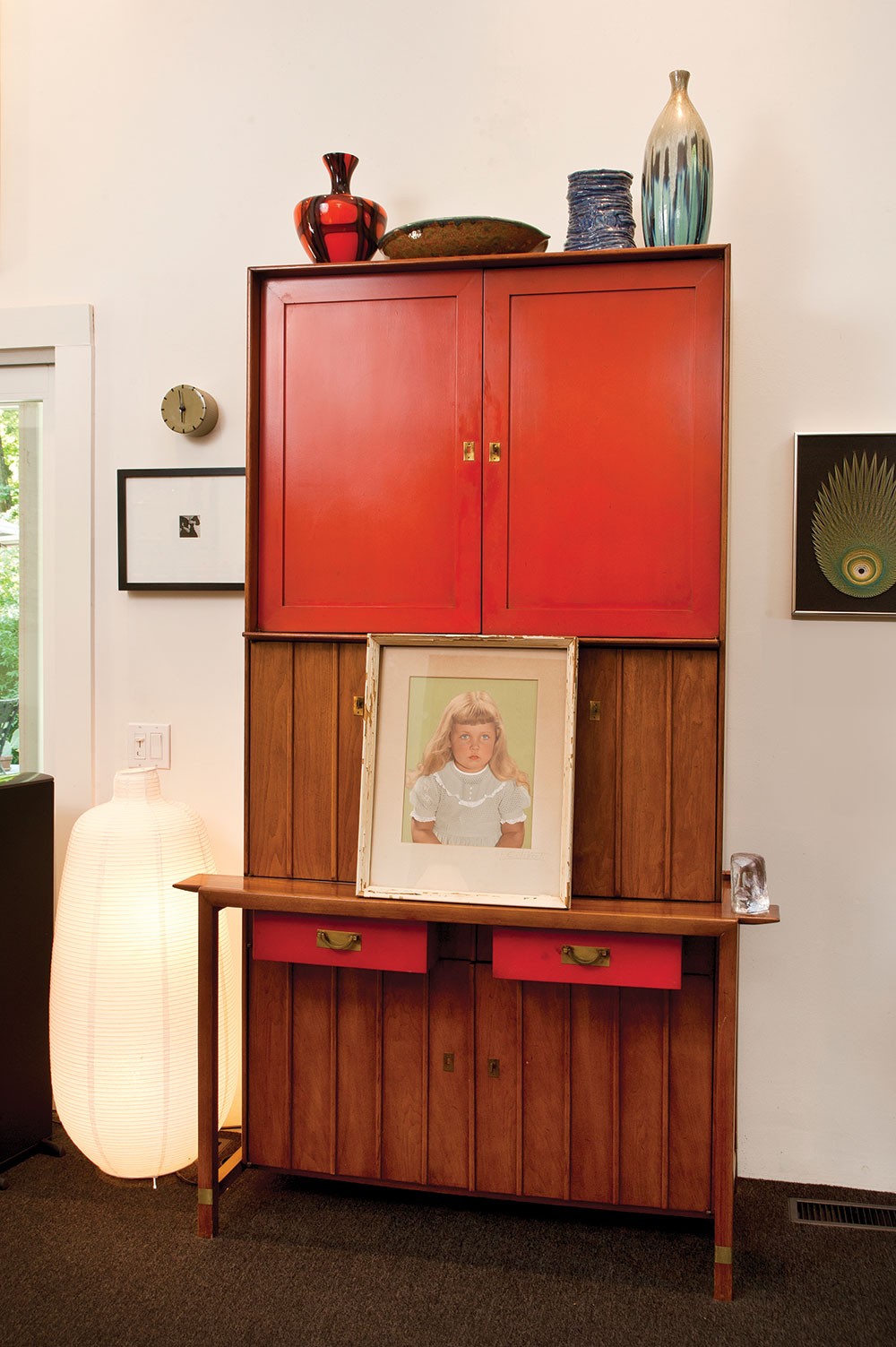 At its heart, the home is one giant, open living/dining/kitchen space underneath an 18-foot cathedral ceiling. The design is both aesthetically pleasing and streamlined. Pottery and glassware collections, extensive wall art (lots of it from local artists), and myriad musical accoutrements add color and vibrancy, while a sense of order ensures that that vibrancy never detracts from the room's spaciousness. Next to the fireplace, ample seating provides generous views through a glass slider. A mirror, extending from behind a couch to the room's apex, reflects those views so they seem boundless. The slider leads to a large deck, naturally extending the main room. The deck is where Aronson, who says she's "always on her way to relaxing," actually relaxes. For her, that means sitting long enough to read the newspaper (the real, old-fashioned, paper paper) and taking time to enjoy the landscape she's grown to love. "I can sit outside and look at this field all day long, but from 5:30 to 6:30 is the golden hour. I love that time of evening—it tells me so much about my life."

Back inside, the kitchen has a six-burner Wolf stove and extensive counter space. Cooking is something Aronson didn't take up until she moved to Woodstock, but when she did, it was wholeheartedly. A large cookbook shelf forms one corner of the kitchen, and Aronson loves cooking meals for friends—sometimes up to 60 of them. "This," she says, "is also pretty relaxing."

All Love, All Woodstock

Past the cookbook shelf is Aronson's office. Originally trained as a journalist, she held various gigs in the area until an event in 2010 propelled her onto her current path. That year, Constance McMillian, a teenager in Mississippi, sued her high school for the right to take her girlfriend to prom. McMillian won the case; she and her girlfriend were allowed to attend the prom as an openly same-sex couple. However, in protest, many other students of the school refused to attend, leaving the brave young couple alone on the dance floor. Aronson, hearing the story on the radio, was heartbroken for them, and outraged. She called a local friend and declared, "We're having a prom for Constance in Woodstock."

The resulting event, All Love, All Woodstock, was held at the Bearsville Theater, to great success. It also gave Aronson an idea: to combine her event planning, writing, and public relations skills into a PR company catering to local and regional clients. Now creative synergy is her business. Regularly juggling 25 different projects, Mountain Jam and the Ahimsa Yoga Festival being just two examples, she helps clients take a book or product from concept all the way to launch. Most important, she gets to work with people and organizations she loves.

The Family That Plays Together

One of those organizations is the Paul Green Rock Academy. Aronson began doing PR for the academy when her son, Alexander Wacksman, became a student there. Eventually, Green asked her to become a partner in the academy. It was a natural fit. "We love music here," she says. "My son loves music. We listen to music 24 hours a day and we're very passionate about whatever we're listening to." The only problem: Sometimes this passion leads to music wars.

Behind a wall of opaque glass blocks, Alexander has a bedroom, bath, and music room with his guitar collection and keyboard. (There's also a room for guests.) "For the most part we have a fairly harmonious music house," Aronson says, "unless Alexander's playing Kanye or I'm playing Dylan." Alexander, a polite, good-natured 17-year-old, has a different view. "I think our tastes are very different," he says. "I'm really into metal and prog rock; she loves Dylan." Mother and son do agree, however, on the merits of Led Zeppelin, the Rolling Stones, punk rock, and Prince. They also both love seeing live performances. But Alexander has a point: Since moving up to Woodstock, Aronson has become a devotee of Bob Dylan. She's collected and studied most of his work and has seen him play live on multiple occasions.

In her airy master bedroom there's another door-like window, a full bathroom and a feeling of peace. In the corner of the room, a vanity sits under one of Elliott Landy's portraits of Dylan. "Every morning, I like to stand in front of Bob, put on my jewelry and get ready for my day," she says. "I see what Bob's up to." In the portrait, taken in front of his Woodstock house, Dylan is barefoot with his guitar; he looks down serenely and seems ageless. We discuss the Landy- Dylan collaboration and how the photographer was able to capture something that was unique to Dylan's life at the time–something a bit mysterious. "I think," Aronson replies, "it was just happiness."