Where History and Nature Meet 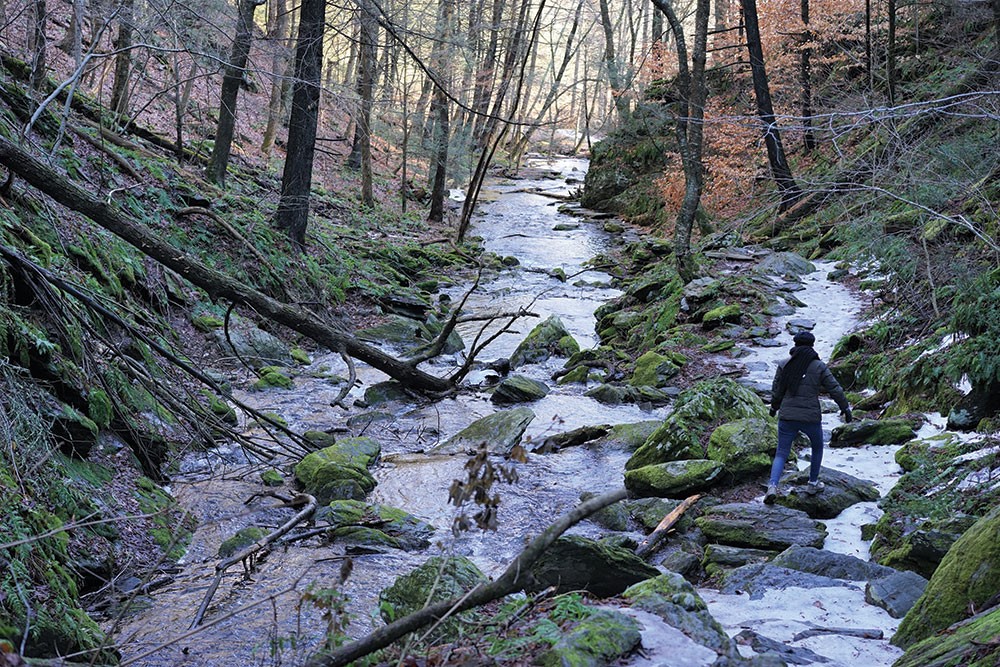 The town of Pawling boasts a bucolic setting in the Taconic/Berkshires foothills, noteworthy ties to American history, and a long-sought-after address for the upper crust, much of which can be traced to the historic hamlet of Quaker Hill. Here on the Hill, rolling countryside, grand old estates, and tales of notable denizens of today and yore converge.

The Hill's namesake Quakers—who resided here in the 18th and 19th centuries—may be long gone, but their influence remains. The handsome Akin Free Library, a Quaker-built library and community center dating to 1898, contains collections of historic and rare books; a fascinating little natural history museum (don't miss the Ecuadorian shrunken head); and the Historical Society Museum, documenting local Quaker history. The step-back-in-time 1764 Oblong Friends Meeting House is noteworthy as the site where Quakers abolished slavery in their communities in 1767—a good hundred years before the nation ultimately did the same; the meetinghouse was also commandeered as a makeshift soldiers' hospital by George Washington's officers during the Revolutionary War. Washington's legacy in these parts also turns up at the John Kane House, where he was headquartered for two months in 1778 (the house functions as a Pawling history museum today).

After the Quakers, the Hill went on to attract a string of prominent residents from the 1930s on, ushered in largely by radio personality Lowell Thomas, who bought a farm here in 1926. These included two-time presidential nominee Thomas E. Dewey; broadcast journalist Edward R. Murrow; and clergyman and author Dr. Norman Vincent Peale, best known for penning The Power of Positive Thinking (find displays and memorabilia dedicated to his life and work at the Peale History Center and Library). Today, former talk show host Sally Jesse Raphael resides here, while across town, actor James Earl Jones maintains his own abode.

Outside of Quaker Hill, the walkable village of Pawling is home to McKinney and Doyle, a long-standing restaurant and bakery (its weekend brunch has been lauded as the best in the Hudson Valley). Another neighborhood fixture is Vinny's Deli & Pasta, a quality Italian specialty deli helmed by charismatic, Naples-born owner Vinny Lamorte, who brings a hearty dose of old-world hospitality to the shop. Don't miss the fresh-made mozzarella or "steak margarita" sandwich (think cheesesteak meets margarita pizza), which was featured on the Food Network's "Guilty Pleasures" series last year.

For shops, indie bookstore the Book Cove just celebrated its 40th anniversary, offering a selection of new, rare, and out-of-print books, as well as regular author talks and book signings. Next door, the North Winds Lavender Farm Store opened a permanent storefront in November, with an assortment of lavender-based items sourced from their Pawling lavender farm, while the Blue Olive offers customers free tastings of more than 50 types of olive oils and vinegars.

Pawling's pièce de résistance on the ecological front is the roughly 1,000-acre Pawling Nature Preserve, which is crossed by portions of the legendary Appalachian Trail. The Trail spills over into a neighboring natural wonder too: the Great Swamp, a 6,678-acre, 20-mile-long protected wetland and wildlife preserve. Access a scenic part of the swamp via the 2012-debuted, 1,600-foot-long wooden boardwalk that proposes great nature viewing and birding amidst the tall reeds. The trailhead lot (there's weekend-only Metro-North service here, too), off Route 22, is just next to the seasonal Native Landscapes and Garden Center, noted for its ecologically friendly focus on indigenous Northeast plants; they double as home base for the recently designated Harlem Valley Appalachian Trail Community, supplying hikers with a rest and supply stop.

The biggest music venue for miles is the intimate Daryl's House, owned by Daryl Hall (of Hall & Oates). Hall films his performance show "Live from Daryl's House" here as well. The club took over the legendary Towne Crier Cafe space back in 2014, and following a major renovation, has upheld the tradition of welcoming musical greats to the region, spanning rock, blues, folk, jazz, and more; plans for a new outdoor stage out back are in the works.

Following Route 22 south to the hamlet of Patterson, history continues—check out the cluster of 18th- and 19th-century historical sites along Route 311, including the Patterson Presbyterian Church, Fellowship Hall, Christ Episcopal Church, and the Maple Avenue Cemetery, burial place of Revolutionary War teenage heroine Sybil Ludington (aka the "female Paul Revere").

On the retail front, the whimsical displays at Fanny Doolittle propose affordable vintage housewares, jewelry, and more; old-school militaria shop The Duffle Bag caters to collectors and prop houses; and the Front Street Gallery, across from the railroad station, puts on four to five shows annually.

For food, the Reverie Café opened in 2015 with a health-conscious menu of soups, salads, sandwiches, specialty coffees, and craft beer and wine, along with Saturday-evening live music. Further along Route 22, Mediterranean tapas and wine bar Iron & Wine opened in December, with young Food Network-featured chef Tommy Stevens at the helm; the eatery will host the two-day Putnam County Wine & Food Fest in August. Not new, but notable, is locals favorite Carriage House Restaurant and Tavern, serving American bistro fare and craft beers.

Animal lovers will delight in the unique creature encounters proposed by the greater Town of Patterson. The exemplary Guiding Eyes for the Blind, a nonprofit seeing-eye dog training facility that's fresh from a late-2015 expansion, claims a noble mission of providing free-of-charge trained dogs to the blind and visually impaired. Come face to face with their lab and German shepherd pups, along with passionate volunteers and staff, on their free one-hour tours. Green Chimneys, meanwhile, attends to kids with special mental health needs via educational activities and animal-assisted therapy. Their campus's farm and wildlife center is open to the public on weekends, and is home to some 300 animals, including horses, camels, peacocks, and an impressive birds of prey display. Equestrians can alternately look out for Haviland Hollow Farm, a center for polo training and matches, with all-ages lessons offered year-round.

The small, family-friendly Thunder Ridge Ski Area, fresh from a million-dollar enhancement, touts more than 20 trails for skiers and snowboarders, along with a ski school, kids' racing program, night skiing, and a full-service cafeteria. Plans for an adventure park and tubing area are under way for next season.

Just north are the sprawling grounds of the old Harlem Valley Psychiatric Center, which was shut down in the mid-'90s following 70 years of operation. The long-abandoned property is currently being revived by the Christian-based Olivet University as an education, IT, and research center, though the project's fruition is at least three years out.

The hamlet of Dover Plains is maple syrup country. Soukup Farms, a third-generation maple syrup farm, built a new sugar house in 2014, where guests can observe the seasonal syrup-making process and pick up maple-infused products ranging from ice cream to coffee. A considerably larger operation, set on a scenic 800-acre estate, Crown Maple at Madava Farms has expanded since its 2010 debut, growing production from 15,000 to 130,000 taps. Visitors can sign up for a comprehensive hour-long tour of the syrup-making process, finished off with a tasting of their various certified-organic "bark-to-bottle" syrups; an on-site café turns out maple-inspired beverages and plates (including a new brunch menu).