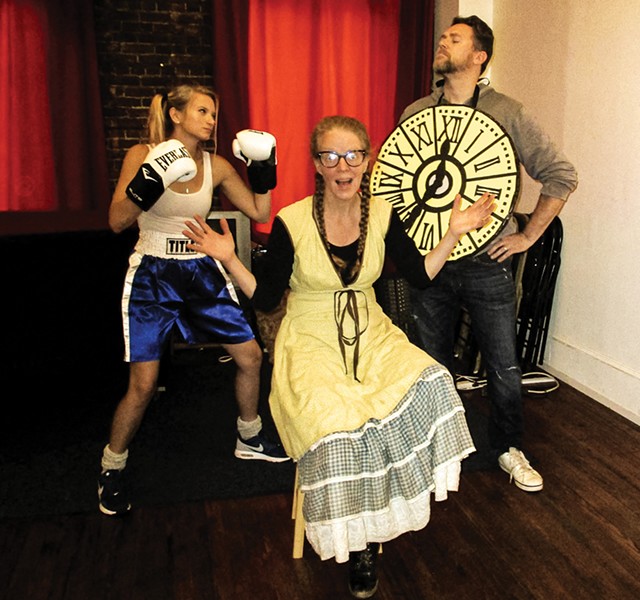 "JAMOT: Just a Matter of Time," a new musical by Sandra Dutton and Scott Petito, will have its world premiere at Bridge Street Theatre in Catskill on November 14. Written by Dutton with music by Petito, the whimsical production follows a young girl named Meg as she learns what happens when time disappears.

"She's been told by her grandmother that she's lost her curiosity, she's studying too much," says Dutton. "She's sitting out in the garden and she finds herself getting a little dizzy and ends up in a maze where she learns that time has been beaten in a boxing match. And it is her job to find him because if she doesn't, she'll disappear."

Playwright and director Dutton is a renowned children's book author who originally wrote "JAMOT" as a play before being convinced to turn it into a musical by a British composer. That first partnership didn't come to fruition because the music was, well, too British. "This is an American play," says Dutton. "I've always loved Lewis Carroll and Edward Lear and The Phantom Tollbooth and all these other books, but I wanted this to be very American. I didn't want any kings and queens."

Instead of royalty, characters include various animals—the mayor is a goose—the mischievous Rhymester, and Time itself. And in an effort to give the music and production more of an American flavor, Dutton began collaborating with fellow Catskill resident Petito, a multi-instrumentalist and composer who's worked with James Taylor, Pete Seeger, Jack DeJohnette, Don Byron, and Dave Brubeck.

While the story may have a toe in the world of classic fairytales, Dutton says the inspiration came from reading about quantum mechanics and relativity. "It was the strangest thing," says Dutton, who read authors and physicists Fred Alan Wolff and Heinz Pagels. "What would happen as I was reading, I would hear these strange phrases that were almost silly, funny interpretations of what was on the page. And I just thought, 'This is very interesting.'"

In addition to Dutton and Petito, "JAMOT" is led by producer Wayne Sheridan and choreographer Rachel Kappel, and features an expansive and talented local cast including Brian Dewan, Lucy Miller, and Leslie Ritter. "Just about all the main characters in my play I read for personally, because I really wanted them to get it," Dutton says. "And it's paid off. It's just been such fun."

"JAMOT" is a play for adults and children alike, but is not recommended for kids under the age of five. The production was made possible through the Decentralization Program, a regrant initiative of the New York State Council on the Arts with support from Governor Andrew Cuomo and the New York State Legislature, with funding administered by the Green County Council on the Arts.