Museum Town: When the Museum is Also the Artist 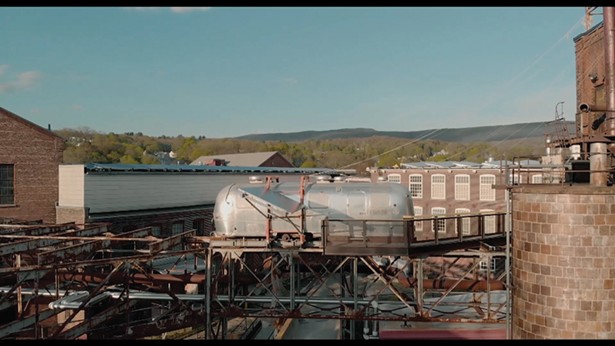 Trainer worked at Mass MoCA for 28 years as the museum's first director of development. She has published 20 books, on such diverse topics as Einsteinian physics and how to make hot sauce. Museum Town is her first film.

"I decided I would follow five characters: the curator, the fabricator, the artist, the townsperson; and I felt that the buildings were a character—because they're so willful," Trainer explains. Mass MoCA consists of 26 structures—the first built in 1860—all interconnected so that workers could move easily between them in winter. Originally a textile factory, the complex was taken over by the Sprague Electric Company in 1942. Eventually thousands of workers produced electronic components for consumer goods, until overseas competition forced Sprague to close. Thomas Krens, director of the Williams College Museum of Art, saw the potential of the shuttered factory as a home for up-to-the-minute artworks. In 1986, North Adams Mayor John Barrett III faced a difficult existential decision: whether to turn over the 17-acre industrial hive to a weirdo art museum—or make it a prison. Today, Mass MoCA is one of the largest contemporary art centers in North America. 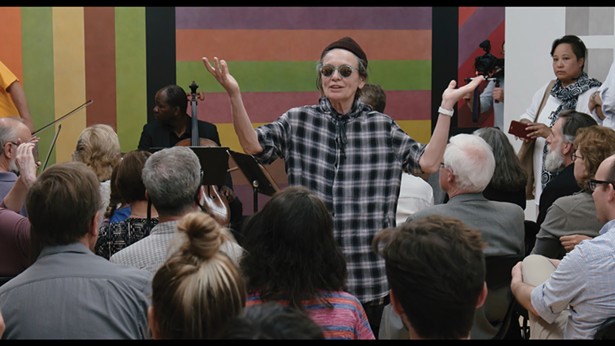 I go to lots of museums, and constantly wonder what's inside the secret "backstage" areas. Museum Town takes us past the "No Admittance" signs, to reveal...a massive workshop. I'd always assumed Mass MoCA's curators sought out artists who just happened to have 157-foot-art installations laying around, but no. The museum commissions a piece, then collaborates with the artist to fashion the structure, fabricating it like a stage set. A team of workers, led by sardonic Englishman Richard Criddle, welds a skeleton, covers it with a "skin," and creates, for example, a 300-foot-long Dr. Seuss-style flugelhorn. (Überorgan by Tim Hawkinson, quite possibly the largest musical instrument ever made.) Sometimes the process takes a year.

Museum Town follows Nick Cave, a sculptor known for his life-size, joyful, neo-tribal costumes. How will he respond to the challenge of a room the size of a football field? His solution, Crystal Cloudscape: an island floating near the ceiling, bedecked with myriad kitsch statuettes, plastic flowers, fake crystals, racist lawn jockeys. There's an element of suspense: Will this eccentric plan succeed as a spectacle?

We watch Cave arrange and rearrange the displays, making minute aesthetic judgments. And finally the island is raised, the crew pulling ropes like sailors on a 19th-century frigate. 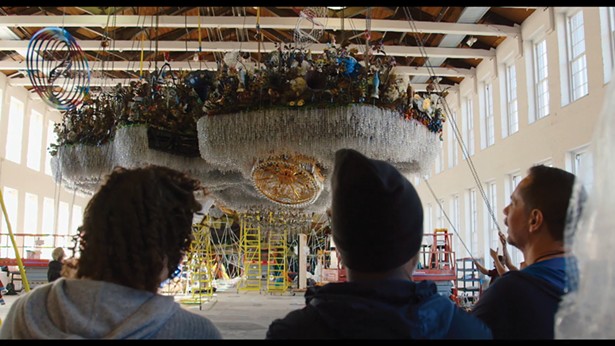 Museum Town, as the title implies, also addresses the community surrounding Mass MoCA. The film deftly contrasts the grimness of North Adams with the sweeping majesty of neighboring Williamstown.

But Williamstown, I fear, doesn't have tireless women like Ruth Yarter, who worked for 43 years at Sprague, then became a volunteer at Mass MoCA, devotedly serving this somewhat incomprehensible art venue. The last scene in the movie shows Yarter walking through a visionary purple room created by James Turrell. She steps carefully, outlined against the dreamlike luminescence. Ruth died in 2018, at the age of 93. The film is dedicated to her.

There's a limit to how much an art mecca can revitalize a blighted town, however. Twenty years after Mass MoCA opened, galleries, and cafes are appearing on Main Street—but how much do they help the average North Adams resident? Before an indie rock concert at the museum, an angry local scrawled on the sidewalk: "Wilco Go Home."

Museum Town is available for download via Kino Marquee, a collaboration between local, independent theaters—shuttered during the pandemic and suffering massive losses—and film distributor Kino Lorber, which has created virtual Museum Town, you help support a local cinema. Kino Marquee is a virtual cinema that supports local art house cinemas through virtual ticket sales. Museum Town is screening in support of three local movie theaters: Time and Space Limited in Hudson, the Moviehouse in Millerton, and Downing Film Center in Newburgh.