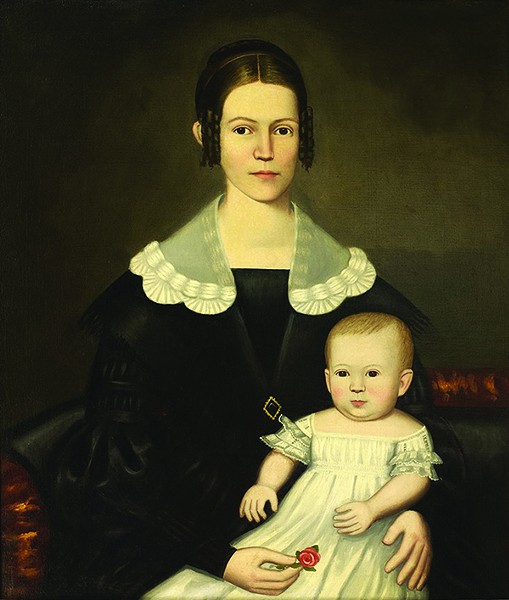 "If you told someone who knows both artists that somebody has paired them in an exhibition, most people would say, 'That's weird!' But when you see them side by side, all of a sudden it makes sense," remarks Jamie Franklin, who curated "Alice Neel/Erastus Salisbury Field: Painting the People," which will be exhibited at the Bennington Museum through November 2.

Indeed, at first glance, these two artists are quite different. They were born almost exactly 100 years apart, in 1805 and 1900, respectively. Erastus Salisbury Field painted shipping magnates in black frocks. Neel painted Andy Warhol naked (and street poet Joe Gould nude, with three penises!). Field traveled throughout New England, producing likenesses for money. (In the late 1830s, he charged $4 for a half-length portrait, which he could complete in one day.) Neel was a poverty-stricken bohemian, painting out of "obsession."

But there are also parallels. Both lived in New York City—in fact, both had apartments in Greenwich Village for a similar length of time. Field and his wife moved to the city in 1841 and remained for seven years, exhibiting his paintings. Neel lived in the West Village throughout the 1930s, until she relocated to Spanish Harlem in 1938.

Both were politically progressive: Field was an active abolitionist, Neel a member of the Communist Party. And both artists had connections to Vermont. Neel's son Hartley, a doctor, moved to Stowe in 1973. Two years later, Neel built a studio on his property, and painted there most summers until her death in 1984. Field passed through Vermont painting portraits, including eight in the Bennington Museum collection, all of Bennington -area residents. 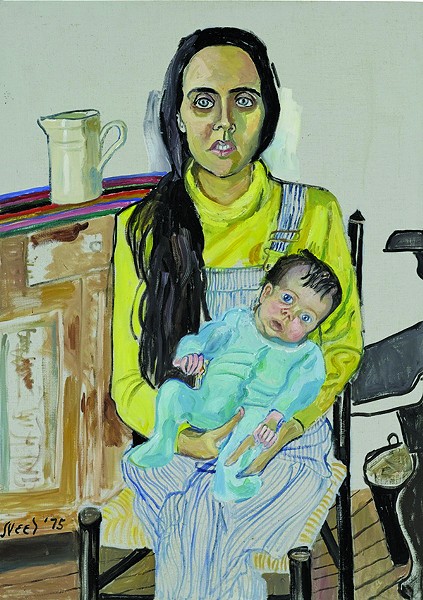 Franklin points out a shared theme of mothers and daughters, and a similar use of visual space (a dominant figure in a shallow background). Both artists have an edge of abstraction: for Neel, a free painterly line; for Field, a geometric near-Cubism. Rather than hanging them in separate rooms, "Painting the People" juxtaposes works by the two artists to draw out their affinities.

It's surprising how often Field depicts women, each on her own canvas, not in the shadow of her husband. Often these sitters hold books, emphasizing their literacy. Neel was one of the first celebrated American women painters, heralded as an early feminist. Field and Neil both used the portrait to make larger statements. "Their goal as artists was not just to paint pretty pictures, but to convey the complexity of the human psyche," Franklin suggests.

Both painters were ignored by the art establishment, Field because he was an itinerant portraitist, Neel because Abstract Expressionists considered figurative art vulgar. Yet both were trained artists. Field studied with one of the most admired portrait painters in America, Samuel F. B. Morse (now best remembered for inventing the telegraph), though Field's apprenticeship was cut short after three months by the death of Morse's wife. Neel graduated from the Philadelphia School of Design for Women.

Moreover, Neel emerged as an artist in the 1930s as museums and galleries were showing 19th-century vernacular art. "Artists like Neel were looking at folk art and being directly inspired by it, consciously or unconsciously absorbing it into their own work," says Franklin. Neel and Field shared an American belief: Every citizen deserves a portrait.

"Alice Neel/Erastus Salisbury Field: Painting the People" will be at the Bennington Museum through November 2. (802) 447-1571; Benningtonmuseum.org.