Wineries, Cideries, Breweries, and Distilleries—the Hudson Valley Has Them All in Spades 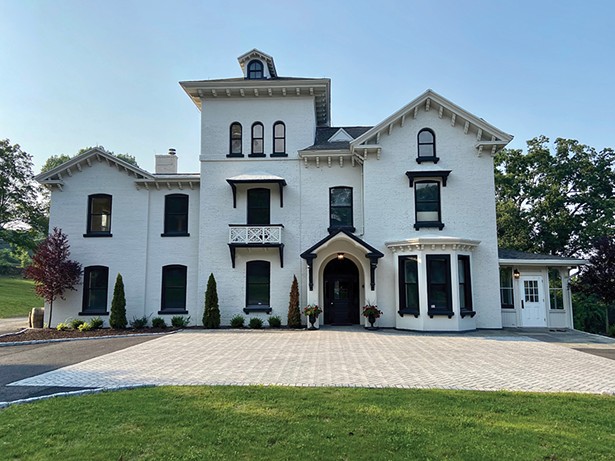 There are 450 wineries, 462 breweries, 186 distilleries, and 72 cideries in New York State (plus a few meaderies as well). The Hudson Valley has been at the forefront of the modern craft beverage movement since Ralph Erenzo worked to change the state beverage laws and opened Tuthilltown Distillery in 2005, paving the way for all that was brewing. Here are some recent(ish) additions to the regional craft beverage scene.

On a quiet stretch of Route 9W dotted by farms and vineyards in western edge of Ulster County, there is a corridor of Catholic institutions—historic monasteries, schools, and camps that have quietly existed along the river for over 100 years. Perhaps a bellwether of the times, one such building, an elegant Italian Renaissance Revival-style villa that can be glimpsed from the road, has found new life as a destination distillery, event venue, and, soon, boutique hotel operating under the name the Hudson House. Constructed in the 1850s, the historic building sits on 27 riverfront acres and spent the last century as a monastery. When entrepreneurs Charles Ferri and Paul Seres purchased the property from the Vatican in 2015, they became the fourth owners. The ground floor of the building houses the tasting rooms, ballroom, and bar. The guest rooms will occupy the two upper floors of the house, while the distillery is housed in the basement. The distillery and tasting rooms are currently in a soft launch phase, with property tours running Fridays through Sundays from 12-6pm and a slew of upcoming events scheduled. The 5,000-square-foot ballroom and the kitchen will come online in 2022, with the hotel in two or three years.

Related The Hudson House: A Destination Distillery on the Riverfront: In West Park, a New Farm Distillery, Event Venue, and Boutique Hotel Takes Over a Former Monastery

The Hudson House: A Destination Distillery on the Riverfront
In West Park, a New Farm Distillery, Event Venue, and Boutique Hotel Takes Over a Former Monastery
By Marie Doyon
Craft Beverage Industry

Seminary Hill is taking the trend of “craft beverage producer as tourism destination” to new and glorious heights. Set in the bucolic rolling hills of the Delaware River Valley, the 12-acre property brings together a vintage, eight-room boarding house and two other accommodations with a certified Passive House tasting room. Seminary Hill produces craft ciders that reflect the foodways and history of the Catskills while marking a global milestone in cidery sustainability. The cider is made largely with fruit from the holistically managed orchard with over 60 varieties of heirloom American, English, and French apples and pears. Choose from one of the five dry and off-dry ciders on offer and sit on the expansive deck while taking in the rural landscape. The restaurant’s menu is locally sourced and seasonal, with dishes changing with the availability of ingredients. Tasting room hours are Thursday and Friday, 2-9pm; Saturday 12-9pm, and Sunday 12-7pm.

This Beacon storefront tasting room takes an offbeat approach to its offerings. Matt Green, owner and founder of Liquid Fables, has the title of Chief Storytelling Officer, and his canned cocktails are based on fairy tales. Green’s concoctions seek to connect drinkers with the legacy of myth and storytelling, and their names evoke classic fables. Here are four of the canned cocktails available: The Lion in Love (rye whiskey with raspberry and maple syrup), Tortoise and the Hare (vodka with lemon and mint), the Town Mouse and the Country Mouse (gin with blueberry and basil), the Boy Who Cried Wolf (vodka with ginger and strawberry). Tasting flights are available and four-packs are available for take-out in the chic, renovated industrial space in the former factory at 1 East Main Street. Tasting room hours are Monday 2-6pm, Thursday 2-7pm, Friday 2-8pm, Saturday 12-8pm, Sunday 12-6pm.

The c.1929 firehouse where Do Good Spirits has its tasting room, in downtown Roscoe, is right next door to a VFW Hall. A fitting location, as Do Good founder Brian Facquet, a Navy veteran, donates all tasting proceeds to the Third Option Foundation, a nonprofit supporting the CIA’s Special Operations community and their families with resiliency services including grief and financial counseling, medical assistance, and memorials. The 8,000-square-foot facility uses a proprietary charcoal filtration system, with an extensive product line that includes craft vodka, gin, whiskeys, and bourbon cream. Special items include their award-winning Bootlegger New York Craft Vodka, Do Good’s highly filtered original spirit made entirely from corn. Another one of Do Good’s highly sought-after products is their Beaverkill Bourbon Cream, made using dark maple syrup from Dutchess County-based Crown Maple and cream sourced from New York dairies. Tasting room hours are Sunday through Thursday, 10am to 6pm, and Fridays and Saturdays, 10am to 7pm.

Related Do Good Spirits: A Distillery on a Mission: Roscoe Craft Spirit Distillery Supports Veterans to “Do a Little Good”

Do Good Spirits: A Distillery on a Mission
Roscoe Craft Spirit Distillery Supports Veterans to “Do a Little Good”
Roscoe craft microdistillery Do Good Spirits continues to bring quality spirits and community to the Hudson Valley, with their mission of giving back to veterans.
By Jacqueline Gill
Craft Beverage Industry

Knitting Factory founder Michael Dorf considered 10 locations before settling firmly on Montgomery Mills, a 22-acre riverside compound with ample room for vineyards, tasting room, indoor and outdoor performance spaces, fine dining, and events. The Montgomery location is the 12th City Winery location, joining outposts in Atlanta, Boston, and New York City in its signature blend of music, food, and wine. City Winery’s wines are made from grapes sourced from 30 world-class vineyards in California, Oregon, Washington, New York, Argentina, and Chile and blended and bottled in Manhattan by winemaker David Lecomte. From its Napa Valley Cabernet Sauvignon to its Finger Lakes Riesling, City Winery wines are always crafted with terroir in mind. Musical performances scheduled for the fall include “An Afternoon of Songs and Stories with Suzanne Vega” on October 17. Themed dinners are also planned, like the Bourbon and Bacon tasting meal on November 11.

City Winery Hudson Valley Offers a Summer Filled with Great Music, Eats, and of Course, Wine
Few things have signaled the Hudson Valley's jubilant return to normal more than a jam-packed summer of live music. And with the region’s thriving music scene humming along once more, the high-profile opening of City Winery Hudson Valley has music, food, and wine enthusiasts alike flocking to scenic Orange County. With its restaurant now open seven days a week and its Concerts in the Vineyard series bringing beloved local acts to its outdoor stage, City Winery Hudson Valley is ready to play host to a whole summer's worth of luxurious, sundrenched plans.
Presented with City Winery
General Arts & Culture

Greig Farm in Red Hook is a much-lauded fruit orchard and U-pick destination as well as a gravitational field containing a small constellation of businesses, including a multi-maker retail space and Papa’s Best Batch BBQ sandwiches. It’s also the site of Abandoned Hard Cider’s second tasting room. (Their first is on Route 28 in Woodstock). When you walk into Abandoned’s spacious Red Hook tap room, to your right you’ll see a sprawling 16-foot map of the Catskills and Hudson Valley with pins marking spots where the Abandoned crew forages apples from. “I’ve run out of pins,” says the cidery’s cofounder Martin Bernstein with a laugh. “We really get apples from a lot of places. It’s an intriguing visual, but it also represents the core of what we do.” That is: using a forgotten resource to create a delicious product of place with renewed relevance. At the bar running along the wall opposite the map, order from the seven dry ciders currently on tap: Vacation (with tropical infusions of guava and passionfruit), Hopped (self-explanatory, good for transitional beer drinkers), Barrel-Aged (on the sweeter end), Classic (crisp and clean, like apple Champagne), Golden Russet (an elegant single-variety cider), Foragers Reserve (made from the cream of the crop apples), or the Basque-style Upstate Sidra (delightfully balanced and complex). Or pull a pro move and order a flight to sample five. In late September, Abandoned added a third location at Kenco Outfitters in Kingston, serving New York State cider, beer, and wine.

Related Abandoned Cider Sets Up Shop at Greig Farm: A Second Outpost in A Bucolic Paradise in Red Hook

On an October evening in 1932, federal agents descended upon Harvest Homestead Farm in Pine Plains, uncovering the largest bootlegging operation ever found in Dutchess County, supposedly run by notorious mobster Dutch Schultz. In September 2020, Dutch’s Spirits opened its tasting room and grounds on the historic site, and the first batch of Sugar Wash Moonshine blended in Pine Plains since Prohibition was bottled in a month later. Bottles of Sugar Wash Moonshine are available for purchase at the distillery, and the tasting room features creative cocktails as well as New York State beer, wine, and cider. A food truck is onsite during tasting room hours. There’s live music on the lawn through the end of October, with Nellybombs performing on October 23 and Brandon Stoner on October 24. River Valley Guild is producing the Moonshine Makers Market on October 16, with live music, food, cocktails, and local artisans. Tasting room hours are Friday 4-9pm, Saturday 12-9pm, and Sunday 12-7pm.

Latest in Explore the Hudson Valley