What You Can Get Away With 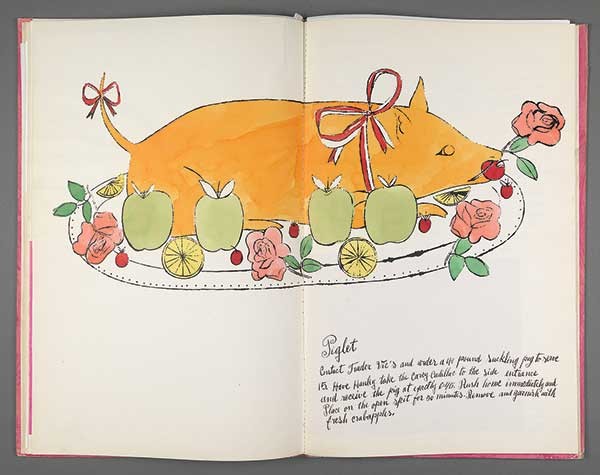 Andy Warhol ushered in a new era of visual culture. As the initiator of the Pop Art movement, he turned faces into icons, soup cans into celebrations of commercial sameness, and colors into commentary. While most of us appreciate Warhol's impact on the art and advertising worlds, few realize that he had a lifelong obsession with books. His work blurred the boundaries between media forms and broadened the definition of what a book could be, an approach expressed in his famous aphorism, “Art is what you can get away with.”

Starting March 7, the Williams College Museum of Art will host Warhol by the Book, a unique study of Warhol's prolific contributions to the field of publishing. Curated by Matt Wrbican, Chief Archivist of The Andy Warhol Museum in Pittsburgh, the exhibition boasts more than 500 objects—paintings, drawings, prints, photographs, manuscripts, letters, dust jackets, portrait-films and artist's books. One gallery recreates Warhol's personal library, allowing visitors to browse the eclectic volumes which informed the artist's work. According to Wrbican, staff at the WCMA “scoured the internet” to locate copies of these unusual books.

Warhol by the Book builds upon the themes of an earlier exhibition, Reading Andy Warhol, presented by Munich's Brandhorst Museum in 2013. It combines nearly 300 WCMA holdings, many of them never-before seen, with a collection of pieces from the Andy Warhol Museum. “Williams has things that no one else has,” Wrbican adds. “They have original drawings for books that were never published. By putting our two collections together, it makes for a really fantastic exhibition.”

Some examples of featured artwork include 25 Cats Named Sam and One Blue Pussy (1954), Wild Raspberries (1959), and Andy Warhol's Index (Book) (1967), a book also known as "the children's book for adults." Wrbican says of the latter, “They crammed it with all of these things like silly pop-ups and noisemakers, an inflatable balloon, a piece of paper that was printed with Warhol's name. It said, 'For a big surprise, cut this out of the book and stick it in a glass of water.' It was printed in dissolvable ink.” An etiquette text, a cassette recorder used by Warhol for transcriptions, and a language instruction book are also on display.

“Warhol loved seeing his name on books,” Wrbican explains. However, the artist's ideas about authorship and ownership often caused controversy. “He wanted to make art that was really democratic, that everyone could get, that everyone could have.” Warhol by the Book examines Warhol's collaborators, many of whom did not receive due credit. Pat Hackett, Warhol's personal assistant, editor, and co-author; Bob Colacello, editor of Vanity Fair and co-author of Exposures (1980); Billy Name, photographer and archivist of the Warhol Factory; and Craig Nelson, friend and editor of Popism: The Warhol '60s (1980), all feature prominently.

The WCMA will offer a series of related programs called “Warhol &.” On March 6, “Warhol & the Stuff of Books” will host a conversation between Matt Wrbican and Kathryn Price, Curator of Collections at WCMA. On April 7, Susan Rossi-Wilcox, culinary historian, and Darra Goldstein, Founding Editor of Gastronomica: The Journal of Food and Culture, will discuss the satirical bent of Wild Raspberries, a European-style cookbook produced by Warhol and socialite Suzie Frankfurt. On April 28, “Warhol & Infiltrated Publishing” will present stories about Warhol's role as an iconoclast in the world of publishing. Lucy Mulroney, Curator of Special Collections at Syracuse University Libraries, and Christopher Cerf, a Warhol collaborator, will speak.

Warhol by the Book will be exhibited at the Williams College Museum of Art in Williamstown from March 7 through August 16. Admission is free and open to the public. (413)597-2429; Wcma.williams.edu/

Esteemed Reader: The Pen is Mightier than the Sword | May 2021