High Falutin: Notes from the Luxury Cannabis Event in Saugerties 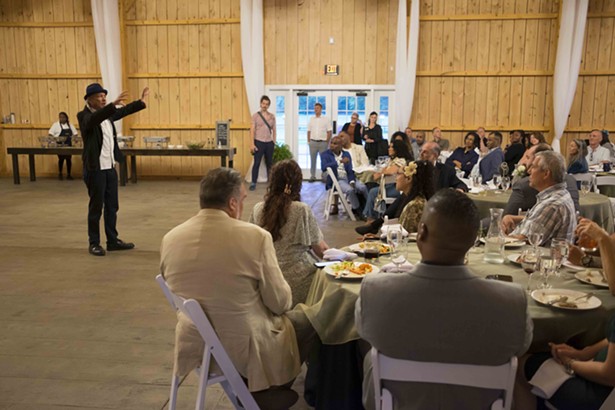 The sun is just starting to sink over the aggressively manicured grounds of Fortune Valley Manor in Saugerties. Outside an elegant mortise-and-tenon barn set in a bowl at the bottom of a steep, winding drive, couples are checking in, posing briefly for photographs on a patch of red carpet in front of a banner bearing the names of corporate sponsors. The smell of meat—Wagyu beef actually—charring on an unseen grill carries across the grounds on a light almost-summer breeze. It is an Event.

It’s an event that a few decades or even a few months ago might have featured federal agents stalking the grounds, jotting down license plates or covering the red carpet with a telephoto lens from a hunting blind in the fields of tall grass and wildflowers abutting the venue. It is, after all, a gathering of folks in the business of growing, selling, financing, insuring, and otherwise making a buck off of marijuana. But these are different times and the only cop in attendance is Saugerties Police Chief Joe Sinagra, who makes a brief appearance to check out what’s been billed as the Hudson Valley’s first ever “A-list corporate cannabis networking event” and pose on that red carpet with Steve De Angelo, a former marijuana trafficker and legalization advocate turned “father of the legal cannabis industry.” 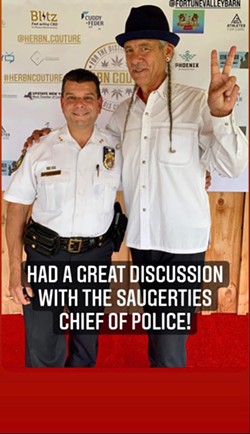 The gathering is the brainchild of Saugertesian Ruben Lindo. A former pro football player and corporate cannabis booster, Lindo’s marijuana lifestyle brand Herbn Couture put on the event as a coming-out party for New York’s adult-use marijuana market. Lindo, who is Black, chose to piggyback the soiree with the first federally recognized Juneteenth holiday as an acknowledgment of a sort of freedom that is at once different and, given the demographic realities of the War on Drugs, the same.

“This is not just about money or building a new industry,” says Lindo. “This is about justice, it’s about equity.”

It’s also about making money and building a new industry. The tented patio behind the barn is as good a place as any to take in the breadth of that industry. The scene could be any trade association networking confab. Business cards are traded, names exchanged, and elevator pitches delivered with an air of laser-focused affability. Lindo likens the development of New York’s cannabis industry to the California Gold Rush. A few lucky prospectors hit it big breaking rocks along a muddy stream. But the real money was made by the guys selling pickaxes and the bankers extending the credit they needed to buy in bulk. The pre-dinner mingle is an object lesson in just how many ways there are to make money in cannabis without getting your hands sticky. One attendee, a medical marijuana education advocate, laments the sorry state of medical knowledge among staff at a California dispensary she visited recently (gripes about the Golden State’s adult-use market are a common theme with words like “failure” and “tragedy” featuring prominently). “I told them I needed something for joint pain, just to see what they would say,” she says, still acutely rankled by the experience. “They just looked at each other and said, ‘Let me get the manager.’”

Daryl Miles runs PPSGCann, a payment processing company based in South Florida that facilitates credit card transactions in the cannabis industry. The trick, Miles explains, is to process the sales as cash advances, thus avoiding entanglement with federal laws which still treat interstate financing of marijuana sales as a crime. There are business cards from insurance salesmen, land surveyors, and a security firm which specializes in threat assessments of disgruntled employees. There’s former Atlanta Falcons player Clint Johnson on behalf of Athletes for Care, a nonprofit that promotes cannabis as an alternative to opioids for sports-related chronic pain. There’s a guy who owns a fish farm in Greene County.

The room also includes people who will be instrumental in determining what New York’s adult use market will look like. The law passed by state lawmakers and signed by Governor Cuomo back in April is a framework. The minute details of how, where, and under what restrictions cannabis will be grown and sold in the state will fall to a 13-member Cannabis Control Board appointed by the governor and state lawmakers. That regulatory structure will be built piece by piece over the next 18 months and everyone present believes the market will rise or fall based on their decisions. Several candidates for the job are present in Fortune Valley Manor and much gossip is passed about their suitability for the task of designing what’s expected to be a $4.2 billion adult use market.

“He’s going to be on the board and he’s anti-THC!” hisses one attendee about the purported stodginess of one potential cannabis czar.

In a nod to the end-product of all of this entrepreneurial energy, there are in fact cannabis products there for the sampling. On a mezzanine above the main hall, James and Gabe, a couple of 20-something locals, have just had a crash course in budtending and have been drafted into service a table laden with strains of flower, gummi worms, chocolate bars, vape cartridges, and other goodies. Guests can exchange tokens handed out at the door for a product and exchange money to buy more tokens. But for most, the sales table is an afterthought. More than a year after Massachusetts legalized adult use drawing many thousands of New Yorkers and many millions of their tax dollars over the border, the simple of thrill of legally purchasing professionally packaged weed seems to have faded.

And then there’s the salad dressing. Alongside the piles of butter-soft Japanese beef, grilled shrimp, and a desultory mix of grilled carrots and broccoli is a cannabis-infused lemon vinaigrette. For Lindo, the infused salad dressing is a potentially unstable element in an otherwise artfully crafted networking event. If there’s an overarching theme to his message, it’s that cannabis is an utterly respectable industry based on a plant with demonstrated physical, emotional, and spiritual benefits. One hyper-faded guest thrust into a panic state by overindulgence in lemon balsamic vinaigrette could kill the vibe. After extolling the virtues of Wagyu beef, he adds a note of caution and a plea for moderation. “The world of edibles is not for everyone,” Lindo tells his guests. “We don’t want anyone getting wasted.”

But the evening passes with no untoward displays of wastedness. On the patio after dinner, the laughs are a bit louder, the smiles a little warmer, and the intricate joints and arches of a barn built without a single nail a lot more fascinating. Joints are rolled on Herbn Couture ceramic trays and passed to an ‘80s pop hits soundtrack. DeAngelo, whose keynote speech includes a pitch on behalf of the Last Prisoner Project, which seeks to free those still doing time for marijuana crimes in states where the plant is legal, holds court while digging into a (non-infused) cupcake with a fork. 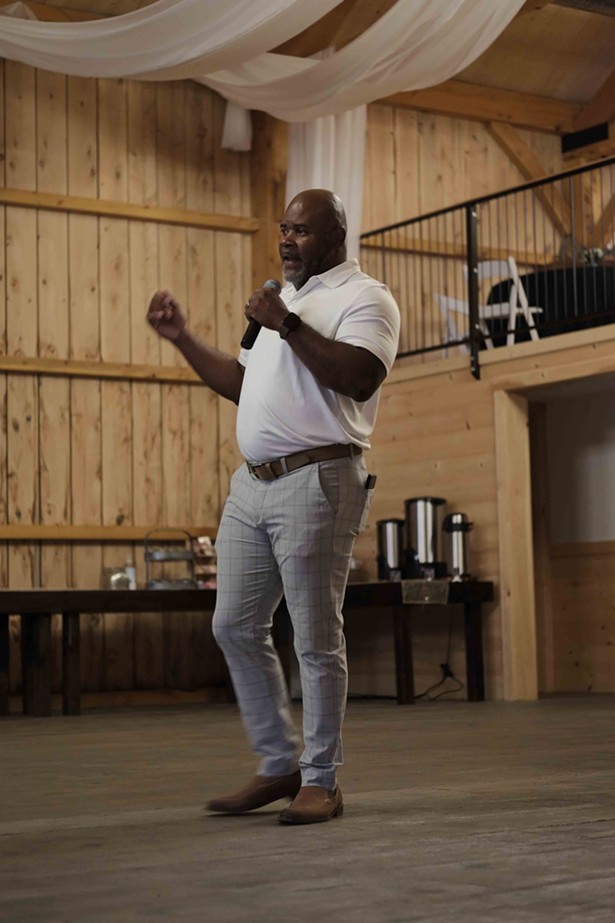 Lindo, meanwhile is taking in the crowd with a satisfied air. One hundred and fifty would-be and actual industry players have gathered a mile from his home to celebrate, network, and plan. And it’s a diverse crowd—white faces predominate but do not overwhelm. As a member of the Hudson Valley and New York City Cannabis Industry Association board of directors, Lindo lobbied state lawmakers hard for social equity provisions in the new law intended to ensure that New York’s legal marijuana market looks a lot like the crowd on that smoke-tinged patio on Juneteenth. “This gathering is a snapshot of what this industry should look like in totality,” says Lindo. “Black, white, Asian, Hispanic, gay, lesbian, straight business owners coming together to form a new industry with inclusion.”