"What to Expect When You're NOT Expecting!" | Theater | Hudson Valley | Chronogram Magazine

"What to Expect When You're NOT Expecting!" 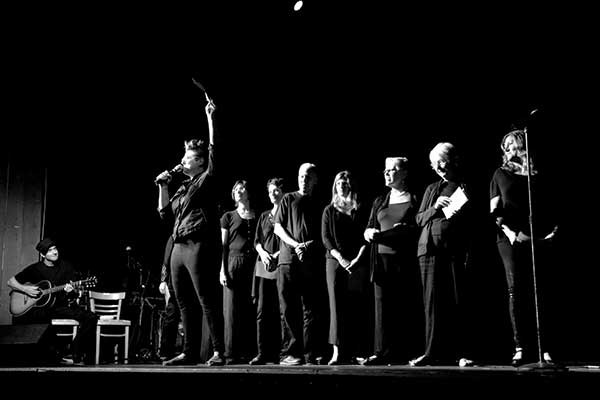 "Our culture's focus on reproductive rights is in the zeitgeist—and lucky for all of us that Eva Tenuto and Sari Botton have their fingers on the pulse." Nurse practitioner, psychotherapist, and co-author of Mothering and Daughtering Sil Reynolds spoke these words to Chronogram after witnessing the TMI Project's original production "What to Expect When You're Not Expecting!" With 44 Planned Parenthoods closing in the past year and political leaders, such as Rick Perry and Mitt Romney, supporting the demise of women's health clinics, "What to Expect" lifts the veil on one the era's most heated topics.

Under the direction of executive director Eva Tenuto and editorial director Sari Botton, Hudson Valley theater organization TMI Project tackles reproductive rights head-on as it performs "What to Expect" at the Rosendale Theatre this month.

The project was birthed from the many workshops offered by TMI. In each class, Tenuto, Botton, and TMI cofounder/instructor Julie Novak work seamlessly to help students uncloak the secrets within their hearts, ultimately constructing each tale into a performance. Botton reaches inside the students and helps to reveal their hidden truths, while Tenuto then shapes the tales to fit the stage. TMI stands for "Too Much Information," and each workshop reveals that information by asking, "What is the part of the story you usually leave out?"

Tenuto noticed a trend among TMI workshops that paralleled topics found in the press; stories of incest, sexual abuse, terminated pregnancies, adoption, and other such narratives poured from the lips and hearts of those attending the classes. Reproductive rights became an inevitable portion of each session. "It is the topic that is most unspoken," says Tenuto. With the help of Botton, Tenuto compiled these remarkable tales into "What to Expect."

Seventeen featured readers will expose their own reproductive stories of heartache and excitement on the Rosendale stage. The performance will tell of a woman who, upon being raped by her brother at 14, hid the story until her attendance at a TMI workshop. A set of five elderly women will reveal their tales of illegal abortions before the fateful Roe v. Wade, and their years of secrecy. Accounts of young men and women can be heard, highlighting the journey of teenage parenthood, though the writers, all minors, themselves will not be performing themselves. Though intense in subject matter, the tone of the piece is balanced by light-hearted and humorous musical interludes.

The piece debuted in June on the Bearsville Theater stage in Woodstock and left Tenuto and Botton awestruck by what they helped create. "I didn't realize how special it was until after the first performance," Tenuto notes. And special it was, though perhaps more for the performers than anyone else. Dark secrets that once weighed down the hearts of each actor became a source of empowerment as audience members confessed the level by which each tale uplifted them after the show.

Tenuto and Botton both wish to take the show on the road, and the TMI Project is seeking help from the community. With proceeds going to Planned Parenthood and TMI's Community Outreach Initiative, the TMI Project has created a crowdsourcing page on Indiegogo.com with the hopes of raising over $100,000. Botton and Tenuto hope the piece will join ranks with Ensler's work in both its style, message, and reach.

"The time is now to secure a woman's right to choose for all time," Reynold says, "and I imagine 'What To Expect When You're Not Expecting' will inform many audiences and keep our spirits up as we fight the good fight."

"What to Expect" will be staged at the Rosendale Theatre from October 25 to 26 at 8pm. Tickets are $15 in advance and $20 at the door. Other October TMI events include TMIdol, an ongoing story slams series on October 3, and a Women's Week Retreat in Provincetown, Massachusetts October 16 to 20. Tmiproject.org; Notexpecting.org.