What the Karmapa Said 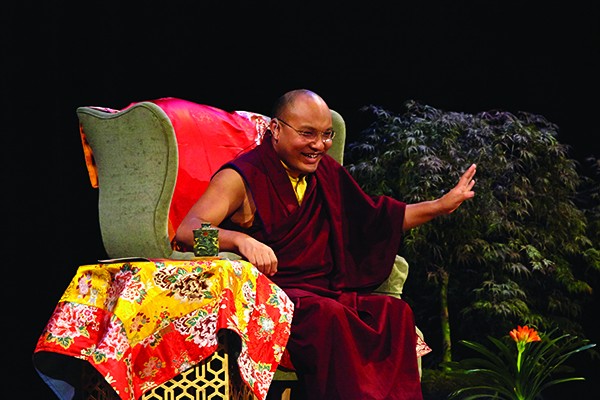 The translator was laughing so hard he could not speak. He seemed to have heard the funniest thing in his life. We were all waiting for the English version of what Ogyen Tringley Djore, the Tibetan Buddhist leader known as the 17th Karmapa, had said.

Karma Triyana Dharmachakra monastery in Woodstock is the Karmapa's North American base. He was here on his second visit to the United States when he offered a teaching at UPAC in Kingston on April 18.

The translator, Lama Yeshe Tyamtso, tried to compose himself, but without much success. He finally seemed to find his center, then, after taking about two breaths, he burst into laughter again. Laughing like the Buddha himself, wrapped in his bright red robe, which the color of his cheeks now matched, sitting at the Karmapa's feet in his headset with pad and pencil still in his hands. Not your average stone-faced interpreter.

Djore, for his part, was placidly watching this scene, mildly bemused. By this time, the audience was getting the giggles. I am one of those people who notices moments of actual transcendence and this was one of them.

Finally, Lama Yeshe could speak. "The sad part is, it won't be as funny when I translate it." Still, everyone wanted to know.

One persistent theme of Djore's talk was urging caution around religious traditions, especially if they're adhered to mindlessly for their own sake. In that context, he was explaining that there are certain traditions that don't help the cause.

For example, if you visit Tibet and come home with a souvenir skull and put it on your altar, it might frighten your family and make them think you're into something really weird. They would not have an accurate notion of your practice. So you don't have to do that kind of thing.

That, for whatever reason—the teacher's inflection, or some reference to his personal experience—is what Lama Yeshe found so funny.

Djore is known as a young, up-and-coming Tibetan leader who is actually with it. He's just 29, he follows and talks about current events, and as far as I could tell, he has a clue what people are facing at our time in history. There is a tradition in Tibetan Buddhism of offering practical information that one can actually use, rather than complex, abstract spiritual theories that seem neither to have feet nor to touch the ground.

Djore had a lot to say about the difference between religion and spirituality. This seemed to be the dominant theme of the day's teaching.

As he understood the terms as currently used in the United States, he explained, religion is what you do because it's handed to you by tradition or by your family. You don't necessarily know why you do it, or what it means. Spirituality, by contrast, involves a process of personal exploration and direct experience of life. It's not about following the choreography of tradition; rather, you dive into a journey, make discoveries, and actually learn what works for you.

People who have unusual spiritual experiences often get the attention of others, but then their direct experiences are typically codified into religions, and the seed experience is typically forgotten. Djore offered what he called an imperfect metaphor.

Imagine that the Buddha is in a hall, speaking to his disciples. He finishes speaking and says that the only way out of the hall is to his right. Then he leaves, to the right (experiencing what in context seemed to be a Tibetan word for enlightenment). His followers, though, stay behind in the hall, for hundreds of years.

They remember what the Buddha said about only exiting to his right, and that he walked out of the hall that way. What they don't know is that he said that because there wasn't a door on the left. Now, many years later, there is one, but nobody is paying attention to the original intent of the teacher's words. First "exit to the right" becomes a rule, then a religious dogma. Nobody uses the lefthand exit, but they don't understand why.

I took the metaphor on the surface level, though it also seemed to apply to the "right" and "left" paths indicated in many traditions—those of purity and passion, respectively. (These align with the white path and the red path, also illustrated in the Hierophant tarot card.) You can experience your Buddha nature either way. Yet, to experience the lefthand exit, you would typically have to break a tradition, rule, or dogma. But those are the only things that are stopping you. The door is there if you want it. Remember it's there. Remember it's open.