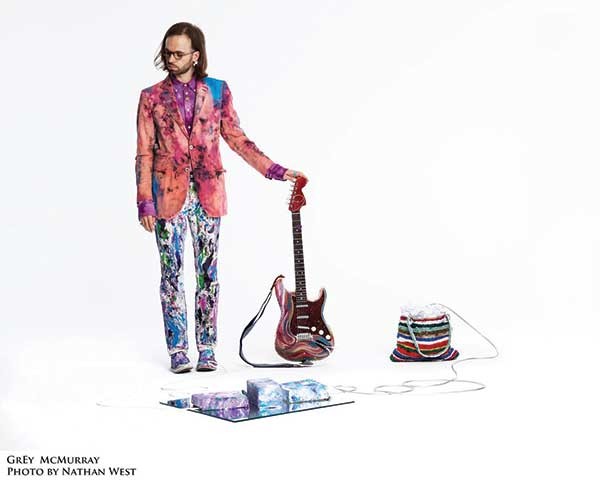 It's one of those can't-see-the-forest-for-the-trees concepts: An artist's home and the extended community in which he or she lives informs their art as much as-arguably more-than any of their stylistic influences. Whatever home environment an artist is raised in shapes who they are and what they do from the very first instant they encounter the world around them. Rarely, though, does their actual relationship with that world become the focus of a live, multimedia stage production. And yet it's that perspective that's the central theme of "Where (we) Live," which was conceived by Bard College resident ensemble So Percussion and guitarist Grey McMurray, and will be performed by them at the campus's Fisher Center on February 14 and 15.

"[The show] developed over a long period," says McMurray, who with So Percussion appears alongside choreographer Emily Johnson in the program, which is being directed by playwright Ain Gordon. "It went from being more about us improvising to us allowing chance circumstance and the environment we're playing in to impose themselves on the performance."

Consisting of Josh Quillen, Adam Sliwinski, Jason Treuting, and Eric Cha-Beach, So Percussion was formed at the Yale School of Music in 1999. The troupe initially rose to prominence within New York's experimental and contemporary classical scenes via their work with composer David Lang and his Bang on a Can ensemble, and in the years since has furthered its reputation by collaborating with luminary artists like Steve Reich, Arvo Part, Fred Frith, Evan Ziporyn, the Dirty Projectors, Glenn Kotche, Dan Deacon, Bobby Previte, and Medeski, Martin and Wood. In addition to their original music, So Percussion, whose members were appointed co-directors of Bard's percussion department in 2010, has performed works by John Cage, Iannis Xenakis, and George Crumb.

Based in Brooklyn, McMurray is on the sharpest edge of modern experimental guitar. Besides being a member of such avant outfits as Knights on Earth, the Exit, itsnotyouitsme, Beyondo, Bell, and Naked Brunch, he has performed and recorded with Meshell Ndegeocello, Tyondai Braxton, Martha Wainwright, Chromeo, the BBC Symphony Orchestra, the Los Angeles Philharmonic, and the Wordless Music Orchestra.

"Where (we) Live" debuted at the Walker Arts Center in Minneapolis in September 2012 and was staged later that year at the Brooklyn Academy of Music's Next Wave festival and in Montana. For each performance, the cast includes a locally sourced artist—guests have included other musicians as well as writers, painters, knitters, blacksmiths, and woodworkers—who creates in real time on stage alongside the players. Johnson's role includes spontaneously devising vague directives for the musicians, which she writes on note cards and passes to them—similar to Brian Eno's famed Oblique Strategies cards, perhaps, but far more open-ended.

"The audience should expect an experience where everyone performing is constantly on their toes," McMurray says. "And, absolutely, some things that are very much unexpected."

Music So Percussion Fisher Center Where (We) Live Video