Flowing with the Currents and Lighting the Fire 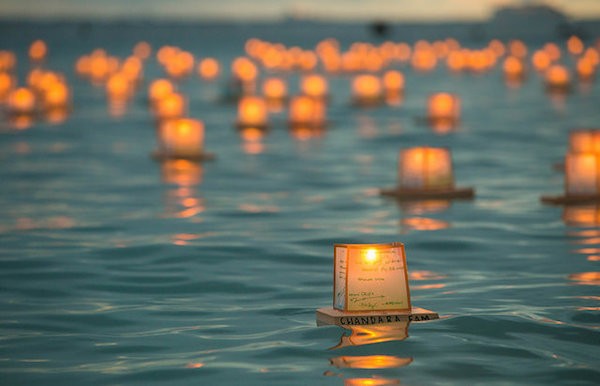 With the Sun now in Pisces as of this past weekend, winter starts to loosen its grip and we begin the approach to spring (even if the weather doesn't play along consistently). Right now we have a concentration of planets in Pisces, the last sign of the zodiac; yet it won't be long before the sky's emphasis begins shifting again, from deep water to the fire of Aries.

You can think of the general feel of this month in terms of the Pisces symbol itself: those two fish, bound together yet heading in opposite directions. If one fish is the "hang out and float" type, the other seems to be quickening its pace forward; one fish is taking a deep, introspective dive, while the other swims across the world's oceans.

Yet both fish bring what they discover to Aries: the sign of "I am." There's a curious process of integration and a renewal of the cycle this time of year, every year. It's not exactly a circle (though that's how we chart the zodiac, in two dimensions) but rather a spiral through several dimensions at once: in other words, growth.

This year, this integration and renewal gets a special boost: in April, Chrion begins the process of leaving Pisces (where it's been for roughly seven years) and entering Aries. It's a significant shift; which means you can think of every other planet moving from Pisces to Aries in the coming weeks as foreshadowing or warming up the territory for Chiron's move.

Many other aspects will fill out the month. Yet, the central events appear to be the Aries equinox (when day and night are of equal length for everyone on the planet; after which days in the Northern Hemisphere grow longer than the nights), and Mercury's station retrograde three days later.

Having Mercury's retrograde take place entirely in Aries could well be a rather lively affair. Mercury in Aries tends to signal impetuous, ego-driven thought and communication — which means it'll likely take very conscious efforts at grounding yourself, slowing things down and thinking beyond your own immediate needs and desires, to be able to roll with Mercury's tricks more easily.

Having a Mercury retrograde in Aries begin shortly after the Sun arrives there for the equinox provides some emphasis. It also may set up an intriguing stage of intellectual review just before Chiron arrives to take the self-awareness game to a whole new level.

That's some of what you may want to look ahead to, but we're not there yet. For now, as mentioned, the Piscean sea is teeming with life: the Sun, Mercury, centaur planet Nessus, Venus, Neptune and Chiron, with the asteroid Juno joining them tomorrow (Friday). There's a wealth of sensitive, creative, soulful energy you can tap into currently.

Speaking in the short term, one of this weekend's standout aspects indicates a need to navigate between highly directed passion and gentler emotions (Venus in Pisces square Mars and Vesta in Sagittarius). This could emerge as unexpressed sexual energy or relationship tension.

If you're feeling any sense of self-sacrifice (such as between work and creativity, or beliefs and emotions/erotic energy) you might want to take another look at that. What do you need to change? Is it a shift in perception or an adjustment in activity?

Meanwhile, the Pisces Sun in a sextile to Saturn in Capricorn offers some traction for getting things done. It offers both the creative vision and the structure or container necessary to make some real progress. Nessus, which is in a conjunction with the Sun, suggests that part of this process—should you actively engage in it—involves the awareness needed to stop some kind of detrimental pattern, probably related to how you see yourself or how you present yourself to the world.

Like all of astrology, it's just one more possible step out of many around the spiral path—one more way to move from where you are now to who you may be in a month or two, or a year or two, or a decade or two. With a snapshot of the short term and glance at what March has in store, you may be better able to flow with the currents of Pisces and then light up with the fire of Aries.