Michael Lang on the Woodstock Festival

One might expect that the man known as the driving force behind the most famous music festival of all time would have been raised in a musical family.

"Not terribly," says Brooklyn-born Michael Lang. "My dad was in the construction and heating business; my parents weren't that big on music. They did own a Latin nightclub for a while, though. When I was a teenager, I loved the early rock 'n' roll. I was addicted. And I still was when I was going to NYU and studying business and psychology."

Those three elements—a love of rock 'n' roll, a business sensibility, and a head for psychology—would serve Lang well in 1969 when, at the age of 24, he cocreated and oversaw the cultural event that defined a generation: the Woodstock Festival, which, 50 years later, is the focus of Woodstock, a new book of photographs from the landmark festival assembled by Lang.The Woodstock Festival wasn't Lang's first foray into concert promotion, but he was still new to the game when the idea for a three-day "Aquarian Exposition" was born.

A friend had opened the first head shop in the East Village, and in 1967, when he decided to open another in the arts enclave of Coconut Grove, Florida, Lang followed him down to help run it. He quickly connected with the Miami area's budding counterculture and began promoting local concerts. The run of shows culminated with his coproducing the 1968 Pop Festival, which was inspired by the Monterey Pop Festival and featured the Jimi Hendrix Experience, The Mothers of Invention, Chuck Berry, and others. Despite his local success, though, it wasn't long before he decided he'd had enough of the Sunshine State. Lang's next stop, that same year, would be another small town with a thriving reputation as an artists' haven: Woodstock.

"It was time to get back to the New York area, and I wanted to live in a small, creative community that was like Coconut Grove but closer to the city," he says. "I already knew Woodstock from visiting the town with my parents when I was a kid. And I knew Bob Dylan and Paul Butterfield were here. And The Band [whose debut album, Music from Big Pink, was then redefining the music world] were here. I met them early on."

"I just thought about how nice it was for someone to be sitting out under the stars in the summer, smoking a joint, and listening to music. I thought, 'I wonder if something like this but bigger could work here.'" tweet this

While he was attending one of the Sound-Out mini festivals that were held at arts matron Pan Copeland's farm just outside of Woodstock from 1966 to 1970, an idea entered Lang's mind. "Nineteen-sixty-eight had been a terrible year, with the assassinations of Martin Luther King and Bobby Kennedy, and Vietnam and the violence at the Democratic Convention in Chicago," Lang says. "I just thought about how nice it was for someone to be sitting out under the stars in the summer, smoking a joint, and listening to music. I thought, 'I wonder if something like this but bigger could work here.'"

Woodstock: A Legacy of Art and Community
A Story That Runs So Much Deeper than the ‘Festival That Didn’t Happen'
Since the turn of the 20th century, Woodstock has hummed as a thriving center of art, culture, commerce, and community.
By Peter Aaron
Community Pages

Lang and a partner, record producer Artie Kornfeld, hooked up with some investors and began scouting nearby locations for what they were calling the Woodstock Music & Art Fair, which, in addition to numerous other top rock and folk acts, would be headlined by a trinity of the day's biggest names: Jimi Hendrix, Janis Joplin, and the Grateful Dead. After they'd ruled out Winston Farm in Saugerties as physically unsuitable, the newly created Woodstock Ventures organization moved their site to Mills Industrial Park in Walkill, where they expected 50,000 to attend. But in a contentious civic meeting, a group of locals came out against the perceived threat of an impending hippie hoard and blocked the event (still named for the zeitgeist-defining town to the north that had inspired it) from taking place locally.

"Some of the old timers had been watching our crew of long-haired guys grow as we were working on the site," says Lang, who admits he wasn't fond of the sterile industrial park to begin with. "And I guess they thought we were going to steal their cattle or something." By this point, July 15, 1969, the opening date of the rapidly growing, national buzz-generating festival, was exactly a month away.

News reports about the now homeless happening attracted dozens of phone calls with offers of new venues, and Lang and his team followed up on all of them. After visiting a run-down, swampy bungalow colony that was immediately eliminated, they stumbled upon their field of dreams: Max Yasgur's farm in the Sullivan County town of Bethel, about 60 miles from the town of Woodstock. "[A] perfect green bowl," Lang recalls in The Road to Woodstock, the 2010 book he cowrote with local author Holly George-Warren. "There at its base is a rise just waiting for our stage."

Rather than an outsider-fearing yokel, Yasgur turned out to be an upstanding figure—and an astute businessman—who was sympathetic to the young organizers' plight. He agreed to rent them the field and some additional property as a place for their "music fair." Before he met Yasgur, Lang maintains, it was looking like Woodstock wouldn't happen.

But, as the world now knows, it did happen. On a much bigger scale than, it can be safely said, anyone—Lang included—could have ever anticipated. What was by the first day of the festival expected to be a total of 150,000 swelled to, reports to this day vary, somewhere between 400,000 and 600,000—at the time, roughly equal to the populations of several of New York State's larger cities.

Related On The Cover: Woodstock, Moonwalks, and Norman Rockwell's America

On The Cover: Woodstock, Moonwalks, and Norman Rockwell's America
The exhibition "Woodstock to the Moon: 1969 Illustrated" at the Norman Rockwell Museum in Stockbridge, Massachusetts, dives into the zeitgeist of this momentous year.
By Carl Van Brunt
Visual Art

On the first day, after nearly 186,000 tickets had been sold and with thousands of festival-goers still streaming in, the event was declared free henceforth. Joining Hendrix, Joplin, the Dead, and contemporaneously hot acts like the Jefferson Airplane, Creedence Clearwater Revival, Canned Heat, The Who, and The Band was a brace of lesser-known newcomers whose star turns at Woodstock would make their careers: Crosby, Stills, Nash, and Young, in their second-ever live appearance as group; Santana, a last-minute addition; and Joe Cocker, whose passionate performance of The Beatles' "With a Little Help from My Friends" is among the iconic festival highlights preserved via the 1970 concert documentary Woodstock.

"One of the favorite moments for me was when I finally convinced Richie Havens [taking the place of delayed openers Sweetwater] to go on and open the festival—and the PA worked!" says Lang with a relieved-sounding laugh. Havens' spontaneously written "Freedom" was another star-making segment; it and Hendrix's fiery rendition of "The Star-Spangled Banner" are two more of the Woodstock film's historic scenes. (Reproduced in Lang's new book is a heartbreaking find: a letter from The Beatles' Apple Records dated the month before the festival offering the services of John Lennon's Plastic Ono Band, James Taylor, and Billy Preston that somehow got lost in the shuffle.) 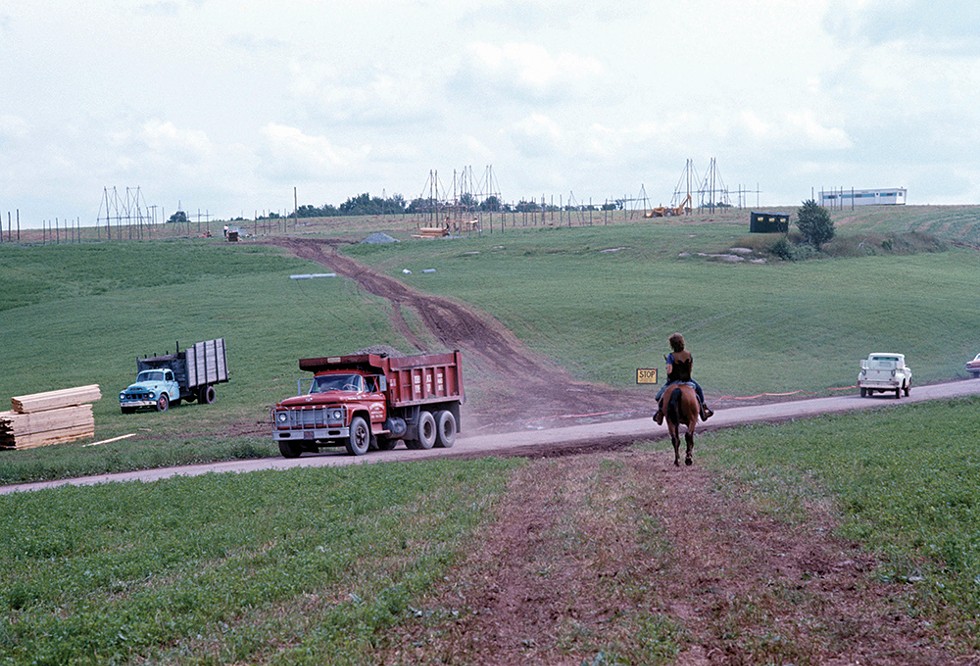 But, really, Woodstock was about much more than the music. Pushed along by the mounting public sentiment against the Vietnam War and its imposed draft; the push for civil rights; the environmental effort; and the longing of many young people to shed what they considered the restrictive social constraints of previous generations, the hippie movement had grown from a San Francisco phenomenon to one that had spread much farther than most could ever have conceived of. But then, right there, stretching for as far as the eye could see in front of the whole world, was roughly a half million of its members. And not only that, but they were taking care of each other and themselves and embodying, in one massive tribal gathering, the message of compassion and togetherness that was the theme of the event—a theme that would be picked up and amplified henceforth.

Due to mud-making rain delays and other logistical snags, the event stretched from the planned three days into four, finishing with Hendrix's 9am set on August 18. When it was all over, the so-called Woodstock Nation had been born and popular culture had been forever changed. So, too, had Lang. "It was such an amazing experience to be immersed in this total love fest—so incredibly powerful and rewarding," says the Ulster County resident, well-known as an eternal pillar of calm in the tensest of situations. "But I'd been traveling at 1,000 miles per hour for a long time and suddenly I felt like I was in freefall. I realized I had to move away from doing festivals for a while. Because anything else I would do was going to be unfairly compared to Woodstock."

He next started a record label, Just Sunshine, and moved into film production and artist management, working with Joe Cocker, Rickie Lee Jones, Willie DeVille, and others. But the born promoter couldn't stay out of the game forever. Twenty-five years after the Bethel event, at the original festival's intended Saugerties site, he co-staged Woodstock '94, which featured Bob Dylan, Metallica, the Red Hot Chili Peppers, and others. He stresses that he was minimally involved in Woodstock '99 ("MTVStock," he derisively calls it), which took place farther upstate, in Rome, and was marred by violence and vandalism.

All over the news in recent months has been the saga of Woodstock 50, the three-day golden anniversary incarnation of the 1969 festival Lang had been preparing for the past few years. Sadly, things didn't go well for the problem-plagued event, which had been set to include Jay-Z, Miley Cyrus, Robert Plant, and the Killers among its scheduled headliners. In July, after already losing its planned location of Watkins Glen International Speedway along with investors Dentsu, Inc., and event producers Superfly, Lang's firm was denied a permit to hold the festival at the alternate venue of Vernon Downs Racino in Oneida County.

That prompted Superfly's replacement, Virgin Produced, to exit as well. Lang and Vernon Downs owners applied again to the county for a permit and were again denied by officials, who, echoing the fears of Walkill residents in 1969, were not confident that the area could handle the sheer numbers of festivalgoers. A deal was next struck with Washington, DC, promoters I.M.P. Concerts to hold the event at Merriweather Post Pavilion in Columbia, Maryland, and make it a free festival. Nevertheless, key acts began dropping off the bill, several of them citing Woodstock 50's distant geographic move as a factor. Ultimately, Lang and his group decided to cancel the festival. A disheartening outcome, to say the least.

But if there's one thing to be learned about Lang from the monumental 1969 gathering he and his troupe pulled off at Yasgur's Farm with less than a month's lead time, it's that the eternally youthful entrepreneur shouldn't be written off yet. When asked if he ever thought he'd never put on another Woodstock Festival after coming down from the heights of the first one, Lang quips, "Never say never."

Update: On Wednesday, August 31, Michael Lang announced that he was cancelling the Woodstock 50 event after plans fell through to move the free event to Maryland.

The original print version of this article was titled:
"We Were Half a Million Strong"