We Are Now Off The Map 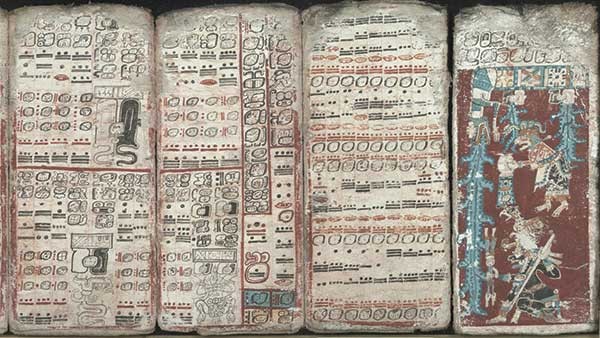 The third week of December was, at least, the last week of the Mayan 13th baktun—a span of time within the Long Count that dates back to 3113 BCE, or 5,125 years. By human standards, that's a vast reach, encompassing 1,872,000 days. A baktun is 144,000 days, though it's not the longest measure of time that the Mayans used; there are several longer ones documented, including a piktun, though there is a controversy—we don't know if a piktun is 13 baktuns or 20 of them. Either way, time goes on, and so too does the Mayan calendar.

Yet, if the 13th baktun was the end of the piktun, which I believe it was, then 12/21/12 was the culmination of a significant cycle, comprising one-fifth of the Mayan great cycle—the precession of the equinoxes—25,625 years. Time moves on, and we are in what you might think of as uncharted territory.

One reason I give the Mayan calendar a little extra weight is because it's an indigenous creation of the Americas. It's how the most advanced ancient civilization we know of here thought of time, and devised the elegantly beautiful systems of mathematics to keep track of it. Their ability to end the cycle in a year with a transit of Venus (back in June 2012) and to land on the winter solstice are truly impressive and worth taking note of. I think that these things, whether consciously or not, influenced not just the popularity of 12/21/12 but also the subtle respect that many people seemed to feel about it.

There is another model called the Mayan time pyramid that says something similar. This is arranged in layers, each layer up being more recent and 20 times shorter than the previous one. The base layer was a little over 16 billion years. The next layer up was 828 million years, the next one up was 41 million years, and so on upward in reverse exponential form. Each time pulse contained a certain amount of experience equivalent to the one that follows, but in 1/20th the span of time.

The one at the top of the pyramid began March 8, 2011, and lasted 234 days. That might explain why 2011 felt the way that it did: like everything happened all at once. I am not sure where this model comes from or how well it can be verified, but I think it's a really interesting concept of time, and it helps explain why it does feel like we have exponentially more to do every few years. That helps explain why every new, faster model of computer is slower than the previous one, or why it seems like I have to write the monthly horoscope more often than the weekly.

And this model, too, suggests that we're off the map; we made that particular jump in late 2011. It does not directly correspond to the Long Count that turned over on December 21, 2012, but it's close.

As for the Long Count: The last week of 2012 was a compressed moment; an eternity lived out in a week. It was to be, by any estimation, a special week, a kind of bellwether of what was to come, and an indicator of where we were at. The conditions at the end of one cycle often point to the conditions at the beginning of the next, and vice versa. So these were seven days worth looking at carefully, and remembering for what we learned during them.

They began on December 14 with the massacre at the Sandy Hook Elementary School in Newtown, Connecticut. This was, said The Nation, the 16th mass shooting in the United States since the beginning of the year. We watched and grieved the burial of 20 kids, ages six and seven, as well as six of the adults whose job it was to take care of them. We got a look into the dark world of the household from where this well of death had sprung.

During that final pulse of the 13th baktun, we saw every problem our society faces flash by before our eyes, through our minds, and weigh heavily on our hearts. The Onion even parodied this: "In Wake of Tragedy, Americans Demand Reform of Everything, Anything."

The shooting was shocking and it demanded an explanation. Bob Geldof's line "And he can see no reasons because there are no reasons" was no longer good enough. Nothing happens for no reason. For every effect there is a cause—which I believe is the spiritual lesson that we in the United States need to learn more than any other. So, I went looking for the cause.

Global Warming and the Potluck Dinner