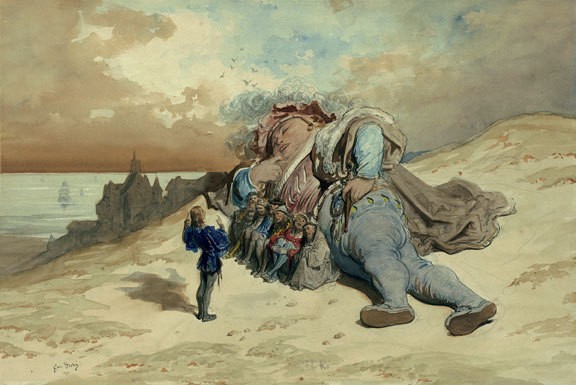 “Catching Light,” the ultra-inclusive title of the watercolor show opening on May 8 at Vassar’s Frances Lehman Loeb Art Center, may give some hint that it is not easy to generalize about a medium that livened up Pleistocene caves, limned monkish scrolls, and continues to excite us in the post-Warhol epoch. Works from the golden age of watercolor—roughly, the 150 years bridging the careers of English Romantic J. M. W. Turner and American Modernist John Marin—occupy a wide pocket in the college’s collection. Paintings by pantheon members as diverse as Pre-Raphaelite John Ruskin, Precisionist Charles Demuth, and Dadaist George Grosz have been gathered up like evanescent posies by curator Patricia Phagan for a fittingly seasonable celebration of the earthly radiance that watercolor so readily bestows.

To venture a generalization: Literalness—as in the tender factuality of an Audubon robin—is a prominent characteristic of the medium. In Legendary England: Tintagel by Hudson School artist William Troth Richards, an immense silvery rock with impossibly intricate crevices is staged on a photorealistic ocean. Yet despite this landscape’s over-the-top Arthurian affect, the restrained accuracy of its coloration neutralizes its drama. The artist was in fact, via watercolor, seeking to counter the trademark profundities and stylized climaxes of his oil-oriented peers. Similarly, a Max Beckmann enthusiast might note that the tinted flesh in his window-peeping Nachtmusik lacks the libidinal sizzle of his oilier Weimarian figures. One could even venture to say, albeit riskily, that watercolor in its patent honesty is generally less susceptible to the vagaries of Eros than other media.

In Hilda Belcher’s The Checkered Dress—believed to be a portrait of Georgia O’Keeffe as a young woman—intimacy finds a vehicle in the patterned folds that cover O’Keeffe’s body. Belcher’s dizzying brushwork feels transgressive along the dress’s curves; her calligraphic perfection serving as counterpoise to O’Keeffe’s own mildly rapturous hands and distracted intensity.

In part, our fascination with virtuosic achievements in watercolor may have to do with the role of inexpensive sets in childhood. When the interplay of the capricious brush and the unforgiving paper is first experienced, the blurred pigments that innocently ensue gradually yield our respect for the Zen of gestural reticence and empty space. Children often discover that their more successful experiments involve flowers, and likewise masters who lived in the age of Darwin cherished the enigmatic translucence of these hues in registering the natural world.

Historically speaking, it was the medium’s own dialogue with paper, the advancing technology in its production and sudden proliferation of books, that gave way to its triumph. Illustrated classics were a boom genre in the 19th century, and the advent of color printing happened to coincide with the promotion of literacy and public education. Gustave Doré was a superstar graphic novelist with an activist agenda who tackled big projects like Dante’s Inferno and the Bible. His vegetal Gargantua from Rabelais mingles his wit and populist sympathies. The show’s 47 works also include a choice sampling of 20th-century eminences, including Jim Dine’s Tomatoes, glowing in a sumptuous sauce of water and light.

“Catching Light: European and American Watercolors from the Permanent Collection” will be exhibited at the Frances Lehman Loeb Art Center, Vassar College, from May 8 through July 26. (845) 437-5632; http://fllac.vassar.edu.