The village of Warwick is the primary nerve center for the Warwick Valley, nestled just 55 miles from Manhattan, but sheltered by mountains and blue highways. “No four-lane road and two mountains to get over, but 40 percent of our residents do commute,” says Warwick Valley Chamber of Commerce President Michael Johndrow. “I think that shows you how worth the drive it is. People come here for reasons that have everything to do with the camaraderie. When we won that ‘World’s Prettiest Small Village’ [a Communities in Bloom award], it was because the businesses, the residents, the schools, the hospital, the Scouts, the county dump guys—I mean, everyone got into it and ran with it. But that’s who lives here: doers. When this town wanted a railroad, they started one; when they wanted a newspaper, they started one. When they wanted a phone company, they started that, and they’re still here doing telecommunications. I feel so honored to live here.”


Deep Roots & Black Dirt Farmers
Orange County’s rich Black Dirt region was once at the bottom of a vast lake. Original inhabitants called it “the Drowned Lands.” Today, a good amount of it is called the Warwick Valley, and it is home to some of the finest growing soil on the continent, perhaps on the planet. Warwick’s roots lie in root veggies, and the results of long and intelligent nurture of the land are easy to see—as when a Mercedes pulls up at Paffenroth Gardens bearing regular customer Dan Kluger of ABC Kitchen, which won this year’s James Beard Foundation Award for “Best New Restaurant,” or when New York magazine features Alex Paffenroth as one of its “Farmers with Cult Followings.” Paffenroth Gardens is just one example. The Warwick Valley’s Black Dirt farmers are the core of what might be considered the New York City “foodshed,” and unlike the watershed, no government watchdog is charged with its safeguarding. But Warwick folks know. And when the Drowned Lands were drowned again in Hurricane Irene’s wake, Warwick stepped up. Within days, there was a website and a major party planned.

“These people set themselves a goal of raising $25,000 and raised $70,000,” says Michael Johndrow, executive director of the Warwick Valley Chamber of Commerce. “In three weeks. Most groups would still be arguing about who got what seat at the table.”

Hometown Downtown
Tamara Grapek jumped at the chance to relocate her young health food store to Warwick. “This is where I always wanted to be,” she says. “But when I first looked, there wasn’t one vacant spot. I watched and waited and grabbed the opportunity.” Grapek’s store, Ask Tamara, is now part of the scene, an unpretentious and cozy place to get supplements or goats milk or take five with the friendly proprietor. Under the Vitameatavegamin poster, Grpaek’s bulletin board is packed with the business cards of dozens upon dozens of her friends and neighbors, practitioners of a vast variety of arts and sciences. “This is an exceptional place to do business because people are so conscious of values like community and environment that translate into loyalty to local businesses,” says Grapek. “People help each other here.”

Home furnishings and décor, clothing boutiques, fine wines and liquors, exotic jewelry, dancewear, toys, lingerie, sculpture, stationery—retail is a lovingly practiced art in this town. And never more so than during the holiday season: the Warwick Merchants Guild is busily beautifying, plotting, and planning the annual Home for the Holidays extravaganza. In late November, shops get decorated and refreshments and entertainment dreamt up, the better to delight the kid in all of us. The celebration kicks off with an open house downtown the Sunday before Thanksgiving. There are horse-and-buggy rides, singing, and an Angel Tree that matches folks who could stand an extra gift this year with those who have the means to give one.

Even if you’re not a natural recreational shopper, Warwick will steal your heart. The village is handily compact and just bursting with loot. You can scamper back and forth between the “miracle stones” and eco-friendly jewelry of Mima’s (butterfly wings set in sterling, anyone?) and the American and Canadian handblown glass and international jewelry across the way at Iriniri as many times as you’d like and not get tired; if you do, you’re never far from a cup of coffee and a place to sit.

Eat It Up
Some 40 eateries benefit from the region’s sophisticated palate and rich black soil; the village is ringed with orchards and wineries. John O’Connell, proprietor of the Blarney Station Bar and Restaurant, has an Irish lilt and NYPD and NYFD patches decorating the place near the “Don’t worry, it’s only kinky the first time” sign. His waitress, Warwick native Heather Hansen, is writing a sweetly scathing book—a taxonomy of “Types of Guys” that has her male colleagues laughing and musing, “I’ve been that guy.” (“I wouldn’t trade Warwick for anywhere or anything,” she says.) Up on Main Street at Eddie’s Roadhouse you can get a range of microbrews on tap to wash down blissful comfort food. Both establishments and 10 of their fellow inns are gearing up for the Black Dirt Pub Crawl, a farm-relief fundraiser for the growers in the Pine Island zone.

Grapek fires off a list of family favorite things: the sushi at the Tokyo Plum House; Latin dancing, live jazz, and Puerto Rican cuisine at Coquito; Fratello’s (“unusual and delicious”) old school, family-style Italian cooking; and, the restorative qualities of the Foot Spa and Tea Bar, where reflexology treatments come with complimentary tea. “The businesses around here are people-friendly,” she says. “There’s a lot of free fun you can have and you can find all kinds of bargains. Style Counsel, for example—its women’s clothes are wildly chic, but I find amazing deals.”

The Chamber of Commerce has 350 working artists among its members and a rich blend of everything else. “A hundred businesses come out for the small business expo, and 1,200 people came to see them,” Michael Johdrow marvels. “And when we do the Applefest (an early October event) 35,000 people stop by and 50 nonprofits make the bulk of their year’s income in that one day.”

“I think it’s partly because we’re a ways away from the big chains that the businesses thrive,” says Grapek. “And there’s such a huge, deep pool of talent on every level—musical, artistic, educational, leadership, cooking. Everybody blends. Friday nights at the open mike at the Café a la Mode, you see everybody, from the teenagers to the seniors, having a blast.”


Education & Artistry
Maybe it’s because they’re a well-educated bunch, these Warwick folks. The public school is lovingly supported and well thought of in the community. “E’lissa Jones plays violin from Charlie Daniels to Mozart and was voted best singer/songwriter in the Hudson Valley in 2010. She teaches sixth grade orchestra. Those kids hear E’lissa. . . they get excited and stay that way,” Johndrow says, with a grin.

Kids can further that musical education at KidStrings, polishing their violin or classical guitar. The Acting Out Playhouse, housed in the basement of the elegant 1867 Clocktower building beneath Strazza Fine Art, teaches musical theater and improv—and even offers charm school. The Chosun Taekwondo Academy educates all ages and skill levels in traditional martial arts and yoga, The seminars and workshops at the College of Poetry welcome all skill levels, too. And, if you were looking to unify your field theory, the Utopian Direction gallery and bookstore would seem a promising place to start.

Education and artistry and prosperity notwithstanding, Warwick has a wholesome and grounded feel to it that can’t be faked. Johndrow and his assistant (who also organizes the town’s 900-family youth soccer league) work their promotional magic from a vintage train caboose with a portable toilet out back—when they’re not having a membership meeting at the nearby Renaissance Fair, just for fun, or out at a ribbon-cutting, that is. Treasure hunting at The Eclectic Eye, one finds glorious heaps of miscellany rubbing elbows with choice period pieces. The music plays on the green for free. There’s a drive-in movie.

Up around the corner, Akin’s Pharmacy has been in the remedy business for 102 years—the other side of the remedy coin, one might say. But, because this is Warwick, there are common threads that transcend the basics, like attractively arranged shelves and a lovely clean smell. At Akin’s, handbills invite customers out to a cigar party, a walk against suicide, a motorcycle ride to heal breast cancer, a pet-blessing ceremony, Tango Under the Tent, and the “transreligious space” of Pacem In Terris.

Welcome to warm, wonderful Warwick. . . and enjoy the Warwickians. Coleen Johnson, minding Iriniri for the artist/owners, says the job is a delight because of the quality of the merchandise and the quality of the folks. “I’ve been blessed to live here 20 years,” she says. “Raised five kids here, spent six years working on the school board. This community? Awesome’s just the only word that fits.” 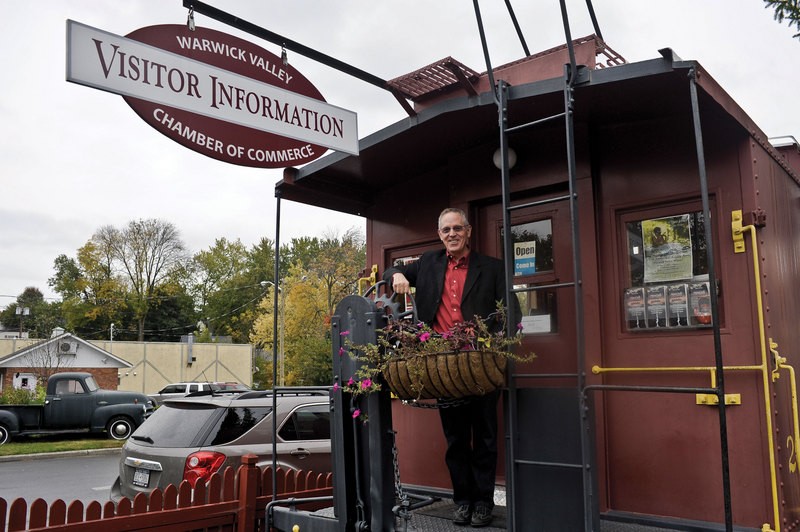 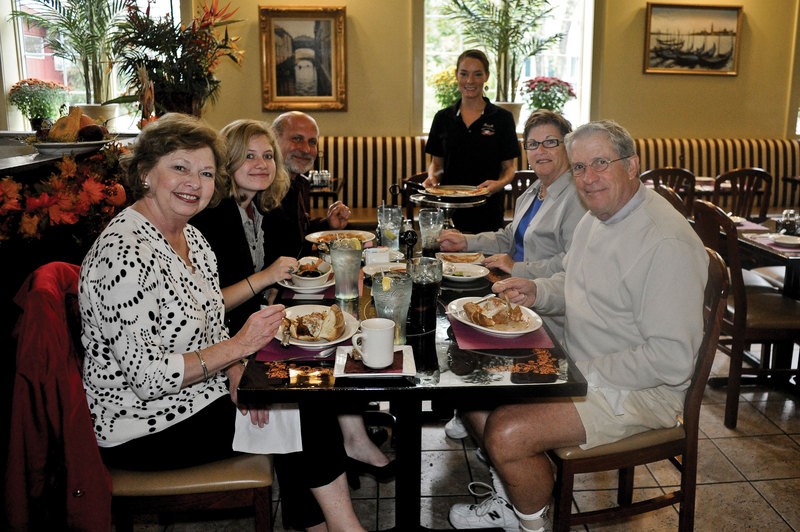