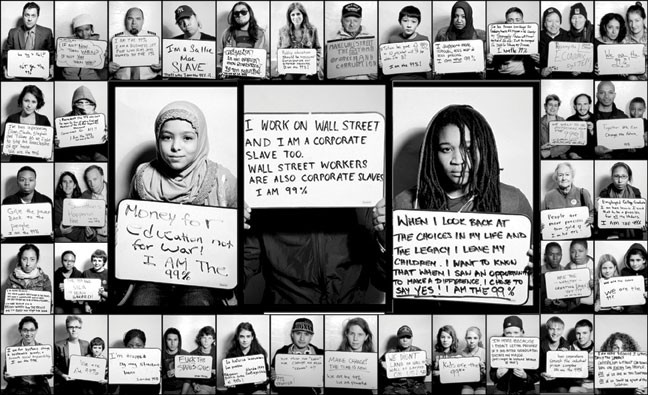 Occupy Wall Street began as a guerrilla action last September 17, and quickly spread over the globe. But with the advent of winter, and internal struggles, the movement has receded. What will be the next phase of OWS? pundits ask. The answer lies in the Greene County town of Catskill.

“Wall Street to Main Street” is an art show in a dozen storefronts, plus a 10-week festival of performance and workshops, ending May 31. This is the first legal collaboration between the Occupy movement and a town. Catskill was chosen for numerous reasons: its proximity to New York City, its economic troubles, the presence of an arts community, and it’s the home of Thomas Cole (founder of the Hudson River School of painters).

“There are ‘Main Street’ issues that play out on our Main Street,” observes Fawn Potash, director of Masters on Main Street. “It makes sense to talk about those things here.” Potash was on the curatorial committee organizing the festival.

Since the police raid on Zuccotti Park, art has played a larger role in the movement. One cliché about Occupy is that it is “a protest without demands”—which is attractive to artists. For what is art if not a protest without demands? The community at Zuccotti Park struck many artists and critics—myself included—as a giant artwork, a “living sculpture” or “temporal work of performance politics.” One such artist, Jessica Eis, documented the encampment, the police raid, and its aftermath, with video and still photography in “Sights and Sounds of Zuccotti Park.” Emily Bruenig makes books from ephemera found at Occupy Wall Street: yellow police tape, stickers, flyers, etc.

Two California artists from the Great Tortilla Conspiracy collective will place any drawing on a tortilla at a tortilla making demonstration on April 28 But you get a choice: art or food. “They’ll either print it in ink, so you can keep it, or in chocolate, so you can eat it,” explains Potash.

Sam Truitt, managing director of Station Hill Press, has organized “Occupy Books,” a storefront library seeded with books from Zuccotti Park. Truitt compiled a bibliography of 108 volumes relevant to the movement, many of which will be on sale by local bookstores Inquiring Mind, The Spotty Dog, and Oblong Books. “It’s a 10-week experiment in communal reading,” says Truitt. Patrons of this self-creating library are invited to write quotations, notes, or other remarks on the walls in magic marker. The room will become a collective three-dimensional notebook.

Laurie Arbeiter and Sarah Wellington print slogans such as RECLAIM CULTURE and WAKE on t-shirts. They will lead a walk from Woodstock to Catskill, culminating in a potluck dinner on May 27.

Judy Thomas creates art from discarded plastic bags. She will lead a workshop teaching children to make colorful garlands, then create a banner styled on a Tibetan prayer flag for the Catskill community garden, to scare away deer.

During the spring break at the local schools, “Wall Street to Main Street” will present numerous children’s programs, including a puppet show, culminating in an art opening at the Catskill Community Center entitled “The People’s Collection.” For this show, anyone is invited to bring objects they wish to display—not necessarily drawings or paintings. It’s like a whole town becoming Marcel Duchamp! “What is art? Art could be anything that has importance,” says Potash.

(Full disclosure: I myself am leading two workshops in this festival, “Listening to Poetry, Speaking to the Gods” and “The Politics of Silence.” In the latter, I will discuss John Cage’s musical composition 4’ 33”, which consists entirely of silence, and explore soundlessness as a political act.)

“Wall Street to Main Street” opened in March and will continue in various locations on Main Street in Catskill through May 31. (518) 943-3400; Greenearts.org.