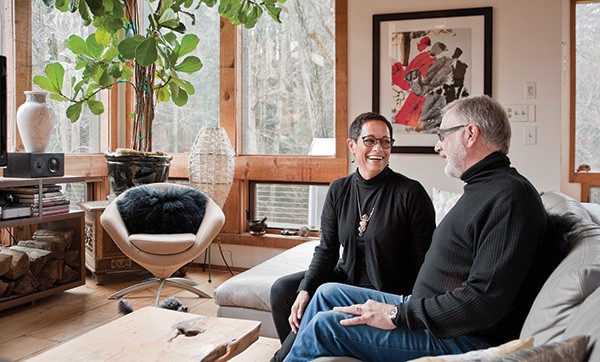 Ed and Michele Sayres's 1,100-square-foot creekfront home on five acres is anomalous in horsey, affluent Millbrook. The property feels secluded, but it's on a side road a quarter mile outside the village, where Michele has an office on Franklin Avenue for her thriving interior design business, M. Sayres Design.

The deceptively mundane exterior—board-and-batten siding, a generic 1984 contemporary—belies the striking pan-Asian interior. It's a serene blend of influences from Japan and China, leavened with decorative items collected on holidays; for example, rugs from a Navajo reservation in Arizona.

"Most of my clients come via word of mouth, but a few have found me on the Internet when they search for interior designers who are certified in feng shui, a small niche I am happy to fill," says Michele. When pressed for more details about her business—Millbrook's known as a haven for celebrities, and however ancient in origin, feng shui is enjoying a moment of upmarket vogue—Michele clams up. "Sorry, no name dropping. I respect my clients' privacy."

Michele's been studying feng shui since the early '90s. Her mentor, Howard Choy, is an architect and internationally recognized feng shui master and lecturer who currently resides in Berlin. In 2005, she was part of the first group of foreigners—20 students from 11 countries—to be certified in feng Shui by an accredited Chinese university. "We studied in Wuhan, a city of eight million, and the courses were conducted in Mandarin and translated by Howard. Wherever we went, we were greeted with stares and giggles. It was very challenging, but an enormous growth experience!" says Michele.

Ed recently retired as president and CEO of the American Society for the Prevention of Cruelty to Animals. Since relocating to New York from San Francisco in 2003, Sayres was instrumental, together with a task force assembled by Mayor Bloomberg, in reducing the euthanasia rate in New York City's shelters from 74 percent to 39 percent. For two decades, Sayres worked at St. Hubert's Animal Welfare Center, a statewide animal protection agency in Madison, New Jersey, where he created the largest humane society-based dog training facility in the country. His father, uncle, and grandfather were handlers for champion show dogs.

The couple—married for 38 years—met through friends at the New Paltz Craft Fair. They have two adult sons. Other household residents include their rescued dog, an ornery toy poodle-chihuahua mix named Jezebel, and Mr. B, a portly, affectionate, once-stray cat.

A look inside and out of Ed and Michele Sayres's home.

Getting to Know Northeast Dutchess County