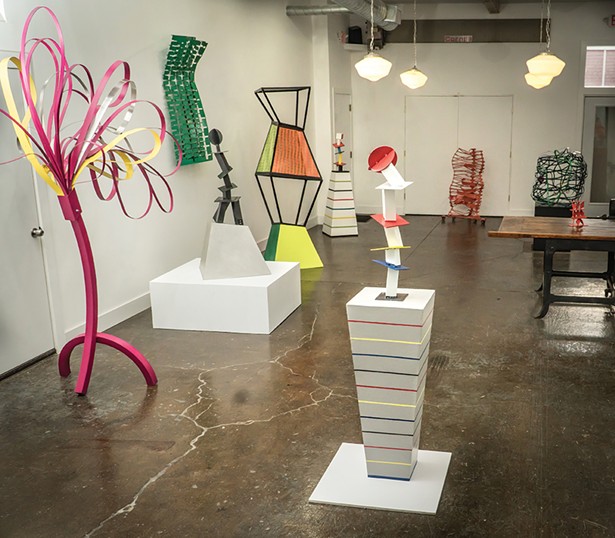 On Saturday, May 4, the exhibition Vivien Collens: New Sculpture opened at Holland Tunnel Gallery in Newburgh. Paulien Lethen has curated a solo exhibition containing over 30 new works ranging from intimate studies to large-scale constructions. The sculptures are primarily rendered in painted wood and steel or welded and powder-coated aluminum. While the acclaimed artist has had many exhibitions of paintings and works on paper, this event marks the first presentation of her sculptural corpus. Through Collens' whimsical assemblages, the exhibition explores a number of interrelated concepts. The undergirding themes of this show include childhood, domesticity, innocence, notions of play and a sense of discovery. With titles such as Little Squirt, Doll with Gray Skirt, and Skater, audiences are prompted to consider this assemblage of works through a sepia-tinted lens of nostalgia, memory, and imagination. Each work touches on a deeply personal aspect of Collens' upbringing. Yet, every artwork is very much accessible because her masterful mining of the past involves excavating and examining elements that many viewers can easily recognize and relate to.

As spectators make their way around the gallery, it becomes more evident that Collens has developed a particular visual language of forms that she deploys. This sculptural vernacular is comprised of prong stool elements (what she describes as tripods); spinning tops; ribbed, rectilinear forms; planes tilted at various angles; and pegs or legs. Interestingly, both the forms and colors call to mind dice or game pieces. For instance, Summer Window is made up of four sheets of metal folded on top of themselves. This compressed wall sculpture is emblematic of one of the artist's signature forms, resembling plastic punch-out elements from a board game or even the breadboard of a computer chip. In Doll with White Skirt and Doll on Soap Box, Collens makes use of another one of her visual units, namely planes. Both are situated on bases fabricated by the artist, feature tilted or skewed planes, and directly reference toys, wooden blocks, nostalgia, and overall elements of play. Doll on Soap Box is further adorned with a spinning top.

Repeatedly encountering these uneasy forms that appear to be buckling or faltering naturally encourages viewers to think about what forces are acting upon these structures to cause such stress and pressure. To my mind, Collens has constructed and arranged a series of works that thoughtfully probe memory, the crushing weight of time, the pressure to mature, and the construction of identity. There is a strong contrast between the heavy, industrial materials Collens utilizes and the whimsical nature of her art. All of her sculptures have a playful liveliness to them—particularly the smaller ones—as if brought to life by some magical, animating force. Visitors might interpret this contrast as the artist's attempt to reconcile aspects of life that are normally separated: play and work; discovery and routine; emotion and logic. Gymnast's Fantasy and Surprise Ball perhaps best embody this central theme of the exhibition. The former strongly resembles a pull-toy with ball, and the latter, with its metal ribbons and wires, seems to form a nest of tangled up trinkets and memories. Overall, it is as if Collens has excavated the heap bin of history, recovering and reconstructing the memories and objects of youth. She provides guests with an intriguing encounter between past and present, posing questions about personal evolution and examination of self through the colors, forms, and associations of another time period.