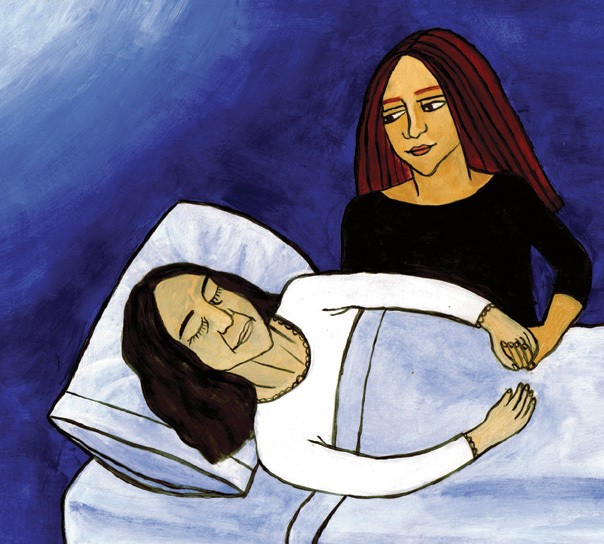 The following notes were sent to me recently by a friend. She wrote them during a 10-day period she and her father spent at her mother’s bedside, at home, after her mother had two strokes a month apart. After a hopeful and “miraculous” improvement following the first stroke, within a week of the second one it was clear that it was time to stop medical interventions and take her mother home for a natural transition from life to death. As a partial view into one person’s end-of-life vigil for a loved one, we hope these notes will be of meaning to others who will, or have already, done the same for someone, as well as to those of us who wonder what their own end of life transition might be like. In this woman’s case, a living will that specified no tube feeding was key to easing the decision to take her home. The family, aware and in agreement with that choice she had made years ago in sound mind, were more confident in the difficult choice to decline medical intervention to sustain her body artificially, and to bring her home for whatever natural process would ensue in the care of loved ones, aided by hospice guidance, and with comfort-focused medications as needed. —Lorrie Klosterman

SELF
As I lay to rest, shifting and trying to settle, each movement is something I’ve seen her do today. They say each of us more closely resembles our parents as we age, and now in our last days together, she and I take the same bent-arm clasp to our chests, or a forearm across the brow, and gaze at the ceiling in very different states of repose. The hand at her throat might not be pain but a gesture of self-reassurance, as I instinctively did once I lay back to rest.

We’ve carried our bodies differently for years, she the lovely and modest wife of a generation ago, me with long strides and casual postures that she long ago counseled me against. But here she is, her limbs unlady-like to her generation, but beautifully natural to mine.

When a mother’s advice so many years ago was to avoid the word “I,” so as not to appear self-centered, now what do you chat about through the long days as she views you, unable to speak but deserving a familiar voice talking of familiar things?

I’m not having onions on today’s salad, or tomorrow’s sandwich, or anytime while the vigil continues. No need to subject her to horrid breath.

This will be me, one day, sprawled in repose beyond what a self-conscious body would allow. Vanity is meaningless—your body is its true self without shelter. It does things in passing from life to death that most people have never witnessed. They are pure expressions of the human animal, beautiful in their way, but unfamiliar. I hope someone is there to attend me without judgment of what my body does. Judgment crumbles in knowing this fate awaits us all.

PEOPLE
Other daughters and mothers are out shopping together, two by two. I notice them like never before, and jealousy pricks at me. “Where is mine?” We have made a fun afternoon of shopping many times, me and Mom. So have I with my own daughter. As I recall the many adventures and misadventures, gratitude grows, jealousy eases, and I silently wish each mother and daughter joy in those precious times.

I notice white-haired women as never before. How old could they be? What have they endured? What are they enduring now? Why are they still here, and my mother leaving? At a crowded café I invite a woman to share my table, and she doesn’t need to say a word to melt my heart.

Out in the “normal” world, beyond the vigil in our livingroom, people watching becomes a surrender to poignancy. The pair of stylish high school girls laughing together evoke a sweet appreciation, for their innocence and youth, like that of my mom’s in her high school photo, though she is radiant in the `40s style of wavy, side-clipped hair, prim white collars, and bobby socks. An elderly woman, skinny and dressed oddly, nonetheless shuffles her aged frame across the street and evokes my admiration, but also love.

HOSPICE
A survey of Americans once showed that nearly everybody hoped they could die at home surrounded by loved ones. Statistics show that nearly everyone dies in the unfamiliar glare of a hospital. It takes courage to bring someone home to die. You are a ship setting out from harbor, with a shred of a map and a few frightened family members as crew, and probably nobody at the helm. A day or two out, a fog settles in and obscures familiar landmarks. The winds cease and even the sun is a wan question somewhere. But there is a buoy out there, with a lifeline tied to it of both literal and metaphorical sorts: hospice services. Hospice is not about death per se, but about comfort and dignity in life, up to the end of it. These services are one facet of the health-care system that is working right. It is even covered for elders by Medicare—paid for by the government.