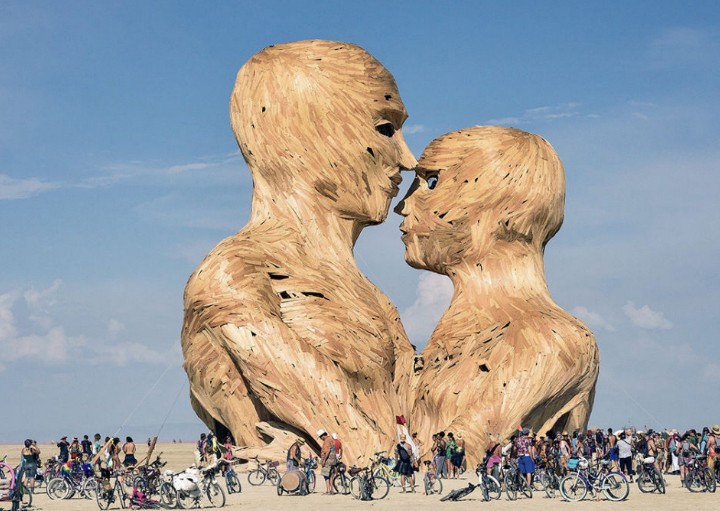 At Burning Man, Spinelli was blown away by the parallels to his hometown of Woodstock. Growing up, he became inevitably infected by the free thinkers and progressive community. At 10, he won his first camera at a raffle. "I was totally fascinated that the camera could see things my eye couldn't. That was my big hook," he says. After studying literature and history in college, Spinelli spent the next few decades shooting for magazines in New York City. Post-9/11, he returned for good to his mountain town and began combining his two disciplines—writing and photography—by publishing The Glorious Mushroom (Ruder-Finn, 2006), a photographic explanation of Catskill-grown fungi.

It wasn't until a nephew's recommendation drove Spinelli across the country in 2012 to Burning Man. It was nothing like he'd ever seen before. Within hours, a completely desolate landscape turned into a sea of rolling manmade "mutant vehicles" (motorized creations assembled from an array of unique objects) and nearly 60,000 people dressed in indescribable decorative garb or just full-on naked painted bodies. "It's like Woodstock and Halloween on steroids," Spinelli says. "You're just so stupefied by the amount of creativity that your species is showing." But it was the way people helped one another that really struck him. "It was extraordinary. You voiced your need for something, and that something miraculously appeared." Something as basic as a free hug, like this month's cover shot, embodies a kindness easily overlooked. And you're not in an environment with just dancing, drugged-out hippies. "It's like a neural network. All of these people are very, very smart who think out of the box."

Fascinated by the event's philosophies, Spinelli began connecting it to Woodstock's Maverick Festival. Maverick was created in 1915 as an art-driven, bohemian carnival to help raise money for the community, while a half-century later Burning Man began. Both Burning Man and the Maverick Festivals focus on "transitory Utopias." Spinelli spent two more Burning Mans riding a bicycle in a surgical mask and speed goggles as a press photographer. This segued into his latest book, Burning Man: Into a 21st Century Utopia, filled with visually stunning photographs of the people and environment. An homage to both festivals, Spinelli compares the uncanny similarities from the larger philosophies of its founders to the smaller details of ceremoniously burning an effigy under a late August full moon.