Vassar Brothers Medical Center: The Wave of the Future 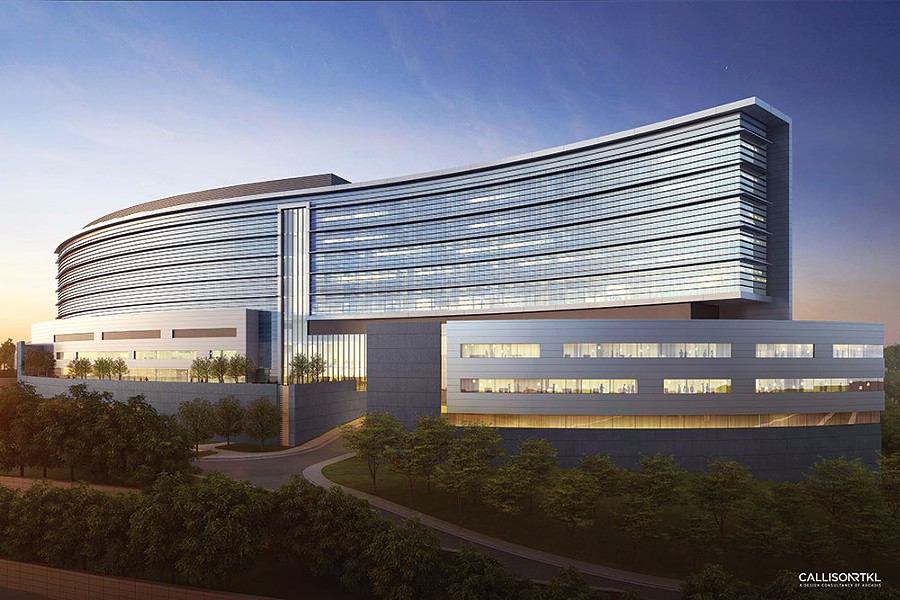 The former Au Bon Pain cafe at 60 Livingston Street in Poughkeepsie is now called the Prototype Experience. Inside this space, open to the public from 2 to 5pm on Wednesdays, are renderings of the $545 million Vassar Brothers Medical Center inpatient pavilion, which is beginning to rise along Route 9 in Poughkeepsie. There are also blueprints, swatches of the carpet that will be installed in the pavilion, and two prototype rooms: a medical/surgical patient room and an intensive care unit room.

Both rooms are meant to look exactly like the 264 patient rooms and 30 ICU rooms that'll be ready for use in late 2019, when officials say the pavilion is scheduled to open. They're outfitted with beds, medical technology, televisions, and bathrooms.

Though the rooms offer people a detailed example of what they'll see when the pavilion opens, they're still facsimiles. The toilet in the bathroom isn't connected to pipes. The television doesn't turn on. And the "window" scene is a print depicting the Mid-Hudson Bridge and a river view.

When posited to Timmian Massie, the senior vice president of marketing, public affairs, and government relations at Health Quest, which operates Vassar Brothers Medical Center, that one feels as if he has stepped onto a Hollywood set, Massie is quick with a response: "Poughkeepsie Hope."

Ground broke on the largest construction project in Poughkeepsie history in September 2016. Once it opens, the 752,000-square-foot, eight-story Vassar Brothers Medical Center inpatient pavilion will overlook the Hudson River in the shape of a wave. Some could mistake it for a hotel, with its glass exterior, outdoor dining area, conference center, and spacious, private patient rooms.

As cranes lift steel into place and the structure takes shape, Vassar Brothers and local officials see the new pavilion, with its grand scope, as a game-changer for health care in the Hudson Valley, Dutchess County, and Poughkeepsie. "This historic undertaking will improve the quality of lives for county residents, and firmly establish Dutchess County as a leader in the region in patient care," says Dutchess County Executive Marcus Molinaro. "This expansion will continue to fuel the health care sector of our economy with new jobs and opportunities."

But will patients respond to the new pavilion by staying local for care, or will they travel north or south? Vassar Brothers officials hope the expansion will give them no reason to leave the area.

A BIGGER SLICE OF THE PIE

In 1959, Vassar Brothers opened its Community Circle care center at the hospital, reflecting a mid-century trend of circular patient-care levels, which were typically designed to minimize the time it took doctors and nurses to reach patient rooms, and to centralize activity. In the center of each level is the nursing station, while the patient rooms line the exterior like pie slices.

But the patient rooms at Vassar Brothers are typically 243 square feet and have two beds, which creates problems. First, it's difficult for a patient to have conversations about private matters when there's a roommate. Second, one patient may be trying to sleep while the other is watching television or seeing visitors. And sometimes a patient can't be moved into a room either because of infection danger or the simple fact that the other patient in the room is of another gender, thus creating blockages.

The new facility eliminates these problems with private rooms, 66 each on levels four through seven. Each patient will have a 330-square foot space to recover, outfitted with two televisions—one for the patient and another for guests, installed next to a pullout sofa. Moreover, the rooms will have WiFi access and USB ports to charge portable devices, and their bathrooms will include a walk-in shower with enough space for wheelchair access.

Aesthetically, the patient rooms, lobbies, and waiting rooms are supposed to evoke a sense of calm. Rooms will be painted in a soft shade of blue, green, purple, or yellow, depending on their level. Paintings, primarily depicting nature scenes, will decorate the walls, and larger windows are planned, both to bring in more light and to emphasize views of the Hudson River on one side and the Poughkeepsie cityscape on the other side.

Plus, while press materials on the pavilion's design emphasize how it mirrors the river's curvature, the choice to shape it like a wave is also reflective of a contemporary model that showcases soft, gentle curves and not long, straight hallways, another way to evoke calm. "When patients and visitors are in the hospital, one thing they have is a lot of time, so they're walking up and down the hallways," says Larry Bell, vice president of construction for Health Quest. "You don't have this feeling that you're just a small part in this long hallway."