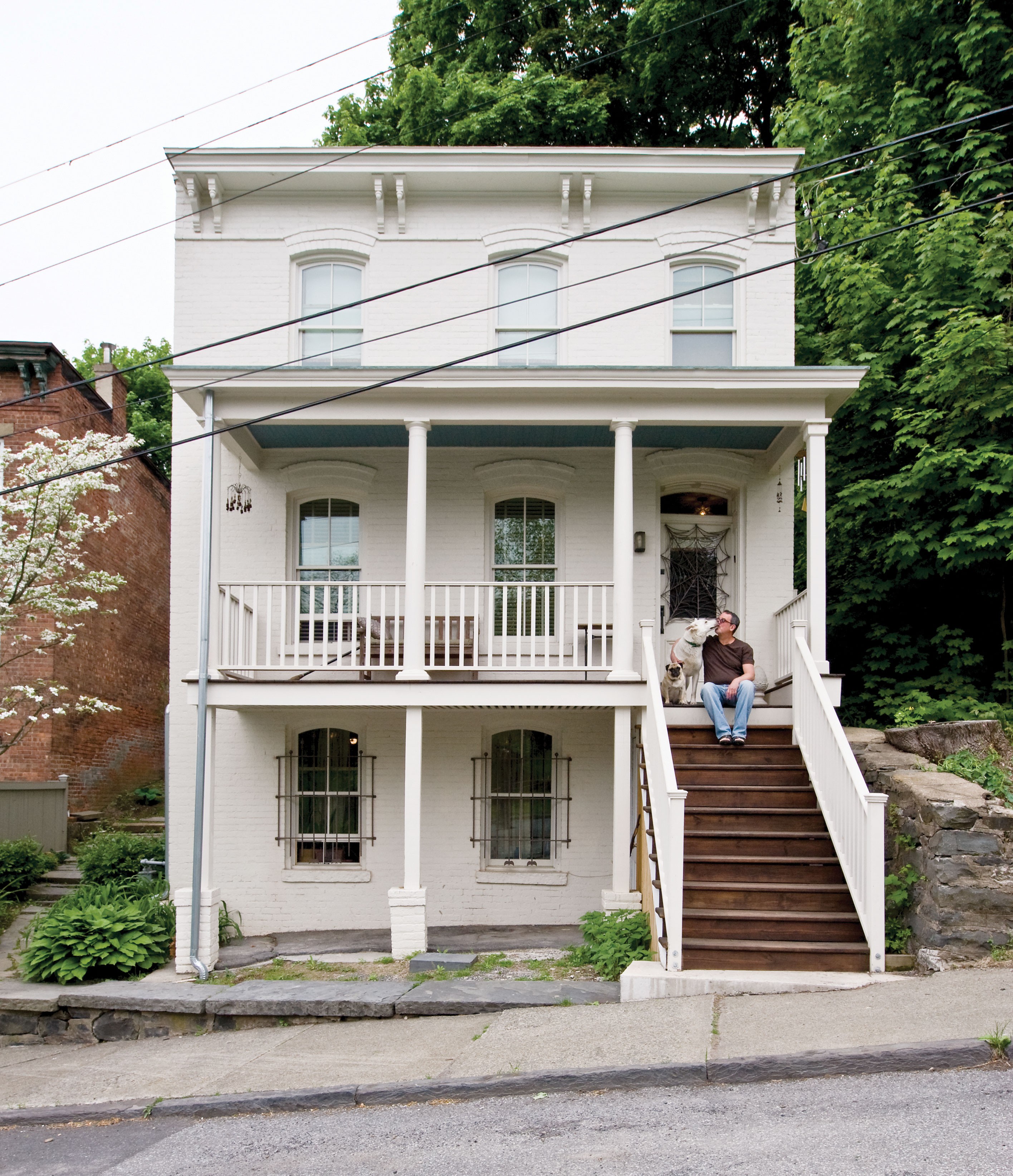 In the annals of Kingston’s Rondout-area renovation stories, realtor Jonathan Korn’s daring purchase of a squalid 1860s Federal-style brick townhouse on Ravine Street reads like a bodice-ripper. Against seemingly insurmountable odds, the petite but upright house, abused by cruel fortune, somehow manages to catch the eye of the man who really loves her. He won’t listen to people who say she’s not worth the trouble.

After nearly four years of dramatic ups and downs—as in a gut renovation that hits a few snags—there’s a Hollywood ending: a glass-tiled chemistry-lab kitchen; a light-bathed penthouse master bedroom with a view of the Wurts Street bridge; and a spacious open parlor and dining area where four closet-size rooms used to be.

A study in contrasts, Korn’s home is like a classic yacht. It’s clearly not a conventional real estate investment. It might be a money pit. That’s okay with Korn. He’s not leaving until he can no longer make it up the restored and restructured staircases.

Perched proudly on a hillside, with straightforward lines and a “secret garden”-style pitched backyard, the house reminds Korn of San Francisco. There, comparable dwellings cost several times the undisclosed—but clearly princely—sum he’s put into his home near the Hudson. He loves smelling the water and spying the sailboat masts. “I believe in these old cities by the river,” the realtor says.

A Home, Not a Pork Belly
Making the once-ramshackle townhouse ship-shape cost more on a per-foot basis than new luxury construction. Through the unromantic eyes of a mortgage banker—perish the thought!—the intimate, 1,000 square-foot, three-storey house cost more than it’s worth. But that’s really the point, says Korn, who funded the renovation personally. You can’t put a price on true love or preserving history. “It’s our home, not a pork belly future!” exclaims Korn, 56, a man of many talents and enthusiasms, who used to work on Wall Street, has an MBA, and lived for a year in Japan. He bought property in New York’s Hell’s Kitchen neighborhood back in 1980, another bold bet.

Korn’s longtime friend Dom Covello, of Hudson Valley Inspectors in Glenford, advised him not to buy the house. Among its flaws: a muddy, water-filled basement; a huge, dangerous tree looming over the entrance; no insulation; sewage and structural-support issues. The house failed the inspection, but Korn bought it anyway, in June 2006, at the top of the market. Korn and Covello haven’t spoken since.

From 4,000 Square Feet to 1,000
Tired of his 4,000-square-foot Arts and Crafts four-square in the Delaware County village of Margaretville, where he’d lived for 11 years, a realtor friend introduced Korn to the Rondout area. When he saw the pinkish luminosity of the riverside at sunset, Korn was struck with longing for a home the same vintage as the famed Hudson River School of 19th-century painters and pursued it.

The avid hiker and gardener runs a tight ship. Not only does the commercial refrigerator have a glass door, mandating deli-display tidiness, but there’s no freezer, reflecting Korn’s keep-it-simple ethos. The open pantry, with its neat array of organic canned beans and other basics, looks like a ship’s galley. That’s no accident. Korn grew up around boats on Long Island and in Boca Raton, Florida, where his family wintered. The compact kitchen, which has a view of the garden, has quartz countertops and stainless-steel appliances. Easy to clean, with a subtle Japanese vibe, there’s a stand of chopsticks and some fine ceramic bowls. The kitchen sink’s open below, because underneath the kitchen sink is “the scariest place on earth,” claims Korn. 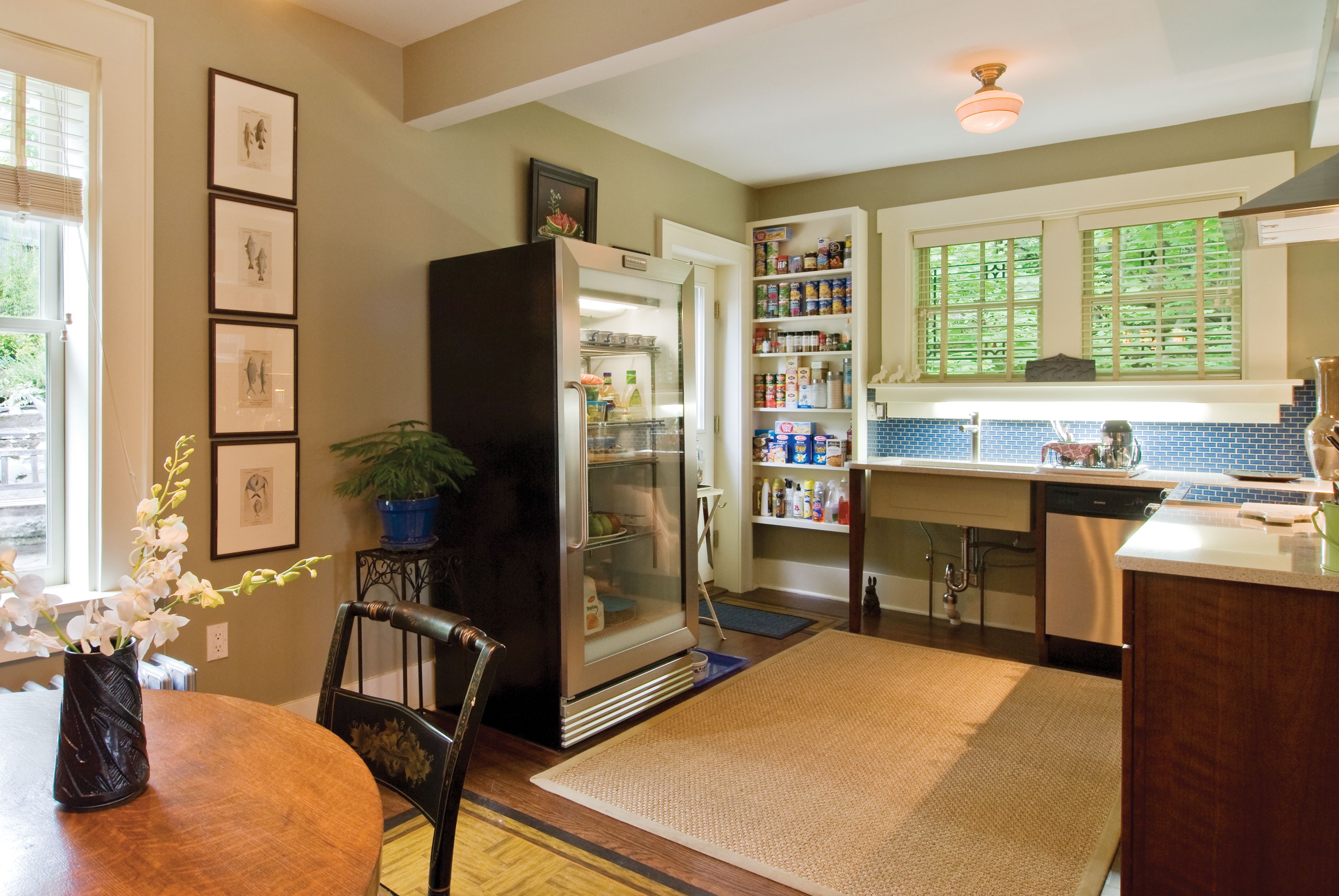 Jonathan edited his belongings down to the bare necessities, which he finds very freeing. It’s easy to maintain a smaller home with minimal stuff. The snug scale of the house and its central location launch him into the eclectic, gentrifying neighborhood, where he’s made close friends. “I always preferred apartment and urban living to the big home country life,” says Korn. “I never feel like I am waiting for the other eight people to come home.”

Tasteful Textiles
Throughout the house are Roman shades, cushions, and accent pillows of William Morris fabrics cut down from the formal drapes of his prior residence. Morris, who died in 1896, was an English textile designer, writer, and preservationist widely regarded as a founding father of modern environmentalism. Janet Winnie, 52, a self-employed seamstress based in Margaretville, enjoys sewing for Korn. From her perspective, the Morris fabrics are an ideal weight which cut neatly and drape elegantly. Korn’s favorite pattern is “Willow Bough,” which is “simple with lovely movement,” he says.

Salvaging Beauty
Polishing the jewels of the original structure—hand-hewn floor planks, banister spindles, and architectural columns—cost a premium. Everywhere else, Korn stripped the house down to the brick and studs and built new, as green and energy-efficient as possible.

“The floors are nicely misshapen and wavy,” says Alan Laycock, 57, of British American Restorations in Hurley, who refinished them three times in order to “wash out” the orange undertone Korn rejected as wrong for his sophisticated neutral palette. Benjamin Moore paints were used throughout; the creamy white exterior’s called Sailcloth. Laycock, an expert on wood restoration and period finishes, says he helped Korn maximize the “hidden beauty in everything.”

It took special equipment to remove the radiators, which were restored off-premises and made to function with a boiler that’s 98 percent efficient. Laycock finished the repurposed radiators with a vintage-look paint-patina formula developed originally for the photographer Annie Leibovitz, a longtime client.

A Metal Spiderweb
Steve Pasqua, 25, made and installed artistic window bars, door security, kitchen shelves, and other pieces of functional metal art all over the house, in a mixture of stainless steel and forged iron. A metal spider web featuring a winged bat secures the front-door glass. “It’s not a Halloween decoration, it has great personal significance. I smile every time I see it,” says Korn, adding that “the neighbors call it the house with the spiderweb.”

The Last Contractor
Korn was referred to Pasqua by his final and most satisfactory contractor, Richard “Rick” Krumenacker, 52. The Stanfordville resident says he began working on the Ravine Street residence in 2008 and had to do lots of remedial work. “There’s no education or licensing system in our state for contractors,” said the career builder. “Anyone with a hammer can quit IBM and call themselves a contractor.”

Krumenacker, who studied with old-timers, describes Korn as a “dream client” because he prefers the more artsy jobs. Considerate of escalating costs, Rick tried to use materials left over by the previous contractor. For example, he styled the remnant cobblestones and tiles in the downstairs bathroom to economically echo the drama of the master bath. He also finished Jonathan’s beloved laundry center, which boasts radiant-heat floors, a flat-screen television, a cedar closet, and a massive pine folding table, and continues to fix problems throughout the house.

“Please, Jennifer, let’s not talk about money,” stresses Korn repeatedly. “It cost more than it should have, but it’s amazing how satisfying, and also reasonable, it can be to work with serious, committed artists.”

Selling Smart: 5 Tips for Listing Your Home in a Competitive Market Sponsored