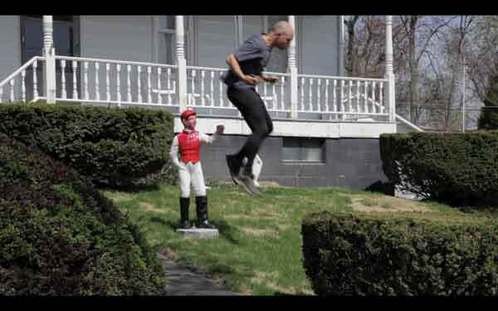 Photographer and Bard professor Tim Davis describes the Upstate New York Olympics, his recent video artwork, as a cross between Frederic Church and “Jackass.” Dressed in casual, season-appropriate clothes, the artist sculpts himself into the upstate landscape in events such as the Port-a-Potty Triple Jump or Snowman Jiu-Jitsu. Unwitting museum-goers viewing these athletic performances may perchance see their own backyards and sporting equipment being used by Davis’s intensely personified Olympian—an event called Not My Balls is all about tresspassing and borrowing. Sculptural commemoratives for these games include gold-plated trophies which are at once handsome, solemn, and ludicrous. The exhibition opens on April 8 at the Samuel Dorsky Museum on the SUNY New Paltz campus. It is part of a yearlong focus on Hudson Valley artists that celebrates the Dorsky’s 10th anniversary. (845) 257-3844; www.newpaltz.edu/museum.
—Marx Dorrity

Where did the idea for the Upstate New York Olympics come from?
I’d always been a photographer who had worked on very specific projects. On my 40th birthday, I just decided to go out and make something without any ideas. I had this new digital camera and I ended up in the woods in Kingston and found myself inventing these sports. With a huge pile of tires, I made my own obstacle course. That became an idea. Then immediately I knew the title. It all came to me in a flash. I would invent new sports and videotape myself playing them.

Had you worked with video before?
No, this was my first effort. I’m very much interested in cinema, but I never made video art. The thing I noticed was that the images themselves have all the integrity of my still photographs. Often there’s an image of something—the camera is rarely moving, it’s on a tripod—and then this bald, middle-age guy walks into the frame and does something outrageous.

Did you play sports?
Yes, I played sports my entire life. And I find myself thinking if I could do anything else, I would play a sport.

The athletes in ancient Greece were nude, weren’t they?
If I were in charge of the Olympics, I would go back to the original; two nude guys, lubed up with olive oil, wrestling.

The spiritual aspect would probably have mattered more in antiquity than it does now.
The original Olympics, which is what I feel I am harkening back to, were a theatrical event. It really was a religious ceremony, not about competition; so much. In a way, it was kind of a pantomime. Obviously I don’t have any competition, there’s no one else there. Part of the character that I envisioned is this guy who thinks he’s in the Olympics but is not.

Though noncompetitive, your sports are not without risks.
One thing that’s crazy about these Olympics, I never once got stopped. Jumping into people’s forsythia, climbing onto church signs, and no one ever told me not to do it. The minute you try to do this in New York City, someone would try to stop you.

You lived in the East Village before moving here to teach at Bard. Is there a major difference?
Yes, and I think it’s related to this work. I love Tivoli and I’ve grown to feel really enamored of the community there. My wife and I have this edible sculpture party every summer. We have really taken it upon ourselves to make our own fun. One of the things about New York City is that you don’t need to do that. There’s an endless amount of spoon-fed entertainment. But the minute you move upstate, you realize nobody’s going to do this for you. That’s how this work came about—feeling engaged in the landscape and wanting to bring something to it.

So, moving here has been good for making art?
When I was living in New York, I always found myself driving out of the city to make art. One of the things I love about living upstate is the sense of there being room for discovery. In places like Manhattan and Brooklyn it feels like there’s so much cognition, so much attention being paid. And then there’s the rest of the world, which makes the job much easier—because photographers are put on earth to pay attention to things that other people aren’t noticing.

Here are some more links to videos of the Upstate New York Olympics: