From French Haute Cuisine to the Best BBQ in Dutchess County 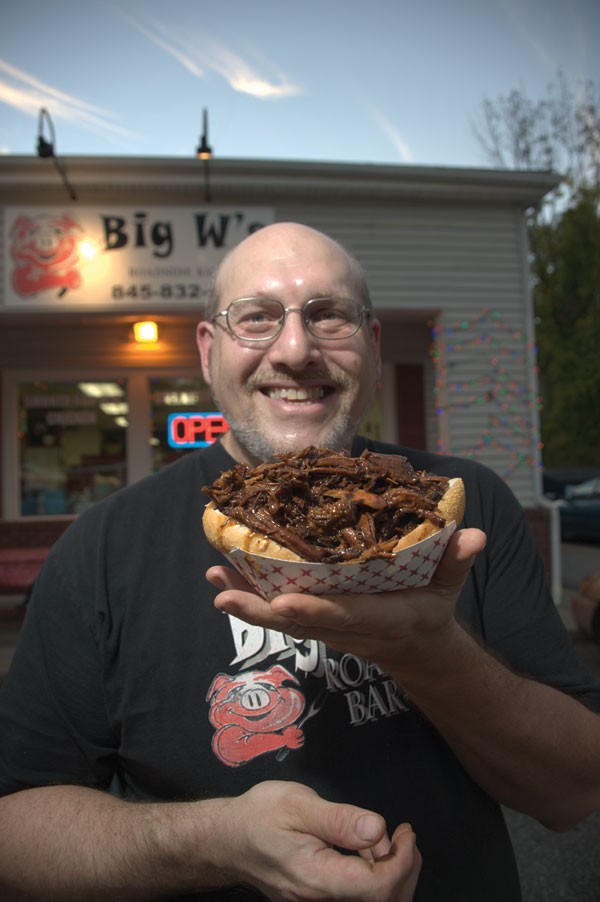 Television reality shows about cooking focus on a zero-sum notion of success: winning the contest, opening the restaurant, beating the competition. That inevitable trajectory toward greater glory and fame is an integral part of our national mythology, but in reality there are many parts to a complete life, and far more nuanced definitions of success. There are subtler stories that may not describe the arc we aspire to, but which can be more instructive and inspirational to us regular folks who may not have the requisite trifecta of skill, charisma, and incandescent ambition that make a star. Warren Norstein began his cooking career at the best restaurant in America and now makes barbecue in a roadside joint in Wingdale. And he’s never been happier.

The first sign that Big W’s might not be a typical barbecue joint comes in the form of Norstein himself—a bearded bear of a man, 48, well over six feet tall—hacking up a slab of pork ribs and bantering with a regular about going to Shul for Rosh Hashana while the Andrews Sisters sing “Bei Mir Bist Du Schoen” on the stereo. He’s warm, funny, and more than happy to talk about the unique path his cooking has taken.

Norstein grew up in Canarsie, Brooklyn, in a big family that cooked a lot of food. The kids were welcome in the kitchen, so he watched and helped his mother make dinner. Nothing was wasted, and everything was eaten. “It wasn’t being taught; that’s just how it was,” he explains, describing how his mother would roast some chickens, boil bones for soup, and make chopped liver so everything got eaten. The neighborhood was a mix of Jewish, Italian, and Chinese families, and Norstein was exposed to those cuisines and kitchens through his friends’ families: an Italian mother who would start cooking for them “the minute our butts hit the stoop” and a Chinese family who owned a deli and eventually let him behind the counter to help, even giving him his first cleaver.

He went to the High School of Music & Art in Harlem, he says, “as a way of avoiding getting into fistfights with football players.” He took to ceramics, so a guidance counselor sent him to the New York State College of Ceramics in Alfred. He got kicked out, twice, and ended up working as a truant officer and driving a cab. A fellow driver showed up one day wearing checks and whites, and Norstein decided he wanted to cook. The New School had just begun a culinary program, so after conferring with his wife, he ponied up the $5,000 for tuition. “That was a lot of money. I was determined to get every ounce out of it. I would buy 50 pounds of carrots, then stand in my kitchen and practice brunoise, baton, macedoine—all the cuts. When I graduated [in 1989] top of the class, my knife skills were as good as a seasoned cook’s.”

That dedication and distinction earned him an apprenticeship in a place way down in TriBeCa (which wasn’t even called that back then) called Bouley that had opened two years earlier. David Bouley already had two stars, and was on the cutting edge of sourcing and preparing food in ways that are now common but were unheard of at the time. Norstein began as the commis, doing scut work: “schlepping 60-pound halibuts off the truck, running around, taking orders from everyone. The Dominicans who worked there taught me my new name: ‘Fucking Guy.’”

Over time, though feeling perpetually out of his depth, Norstein worked his way up in the kitchen, getting hired as a baker under Bill Yosses, who is now the pastry chef for the Obamas, and then getting promoted to garde-manger. “Everything was prepared à la minute; it was unbelievable, but I had nothing to compare it to. All the boundaries blurred, so you were never safe. It kept changing, and everything had to be soignée [‘as good as it can be’] all the time.” Then Bouley got four stars from the New York Times, “and all hell broke loose. We had TV crews from Japan in the kitchen, and leggy models being photographed feeding David pasta. We had separate tasting menus for VIPs. I was working 85 to 110 hours a week.” After two years, Norstein couldn’t take it any more, so he looked for another job.

“There was a track that I was on, but I had no idea what the rules or protocols were. I was stupid. I had no idea what my value was,” he continues; having Bouley on his CV meant he could have worked in any kitchen in the country, but he applied for a job at a fish joint in Bay Ridge, Brooklyn, as well as high-end places. He ended up at Chanterelle, a more traditional yet highly refined French venue down the street from Bouley with a much calmer atmosphere. Norstein worked there for two more years, during which time he and his wife and child moved up to Hopewell Junction. The commute became too much, so he found work reopening La Crémaillère, the storied Westchester landmark, where he worked for seven years, beginning as a sous chef but moving up to kitchen manager after a rocky start. He and his wife had three more children.

Then a call came to return to the city for another reopening job, moving David Liederman’s Chez Louis into a new space across from Radio City, which he did, and stuck it out for a while, but then decided he was done and left the business. “A year later, I went back to cook at a benefit dinner in the city and all these other chefs came up and hugged me and whispered, ‘I’ve got something for you,’ as if I needed help. It’s such a small world, and everyone is swimming so hard in the same direction that if you go a different way they assume there is a problem. They didn’t understand: I was with my kids, who didn’t hate me for working all the time.”

After a year at home, living off his wife’s income as a nurse, their youngest entered kindergarten. Norstein wanted to cook some more, and a friend from Kentucky suggested barbecue, which began a year of research into smokers, recipes, and techniques. “I’d never eaten the stuff before [he still doesn’t, except his own] so I experimented for a year to see what worked for me.” He bought a food truck on Ebay, painted a pig on it, got a smoker to tow behind it, and rented a roadside spot in Pawling. “I had no idea if this was really barbecue, but people were coming.” His kids would help out after school.

Four years into the new career, he sold the truck and bought a former deli on Route 22. Outside, next to the parking lot, is a small red prefab-metal barn with two smokestacks protruding from the top. Inside, two huge, black, steel reverse-vent smokers produce heat, smoke, and meat in copious quantities. Norstein had them made in Georgia, and he likes them for their imperfections: “It’s a challenge to regulate the heat and smoke so the meat cooks just right. My customers know that sometimes it’s a little chewy, but that inconsistency is part of the charm.” He uses a mix of hardwoods—cherry, oak, and hickory—that also fluctuates, adding another variable. Norstein and his cooks work in shifts, keeping the smoker fed and the meat cooking at 230 degrees around the clock, all year long: “We’re good at it now, but it took us a while to figure it out.”

He misses the days of working with local farms to source meat for restaurants, but his volume is too high and the environment inside the smoker is too extreme for those leaner animals. “I go through 1,100 pounds of ribs in a month. That’s all the pigs in the area right there. Same with the beef; the briskets need to be consistent or it throws off the cooking times. And briskets are tricky enough.” Briskets average 17 hours in the smoker, and his famously tender “slow chickens” spend five or six.

The meat is all dry-rubbed with spices, then smoked; sauce is always served on the side. Norstein grudgingly developed the sauce six months into his roadside days, under pressure from customers. “Sauce is a security blanket, but people are set in their ways. I wanted something that would cut the fat and smoke, but not be the last taste in your mouth.” It’s made from mountains of caramelized onions, with several vinegars and wines as well as tomatoes, fruit, and spices. The hot version—now even more popular than the original, to Norstein’s chagrin—has habañero, jalapeño, and Scotch bonnet peppers blended in as well. It’s unique, and addictive; the onion base and fruity heat mesh nicely with the meat.

As in his kitchen growing up, nothing is wasted. All of the scraps from chopping each order get scraped into pans and used later to make chili, baked beans, or braised cabbage. All of the sides are made from scratch, and everything is served in aluminum takeout trays whether you stay or go. Meticulously pouring the liquid from a sheet pan of chickens into a container, Norstein reflects on his current situation: “We’re doing well for a business that’s doing badly.” He has plans to sell bottled sauce, but whether to replace his old equipment or contract with an offsite kitchen remains unresolved. Bouley has visited a few times, offering ideas for upgrading the facilities so Norstein can stretch out a bit technically.

Meantime, he focuses on serving his customers the best food he can—a down-home version of soignée: “The same attentiveness and focus are there; the final product makes you feel good. You can sell down to people, but eventually they’re going to get smarter. You have to sell it to where they’re going to be, their next level of awareness.” The key to his current peace of mind, he insists, has been to follow his passions for food and family without letting other people’s expectations govern his choices or his definition of success: “There are a lot of narratives filled with ‘shoulds’ and they’re all bullshit,” says Norstein. “Now sit, and eat!” 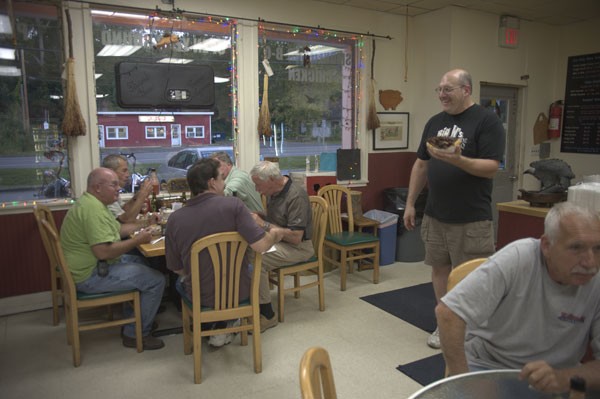