Looking at Chris Buzelli's illustrations is like viewing the world through a dream lens. He has turned DJ Khaled into a ringmaster and Kesha into a rainbow angel for Rolling Stone; he dressed a bird in armor for a Planadvisor story on protecting businesses and their clients; and he personified stress as a bifurcated brain for Science News. Recently, he created the largest illustration the New York Times has ever printed, with a constellation timeline for a story about night tennis.

Buzelli, who lives in the East Village and weekends in West Saugerties, didn't always feel like his illustrations were so dreamy. In fact, for a while he felt like he had "lost the balance between the commercial aspect and making a piece of art for myself," he says, until an ACL injury confined him to his fifth-floor walk-up apartment. "I was stuck up here and I just said I'm not doing that stuff anymore," Buzelli says, referring to his illustrations at the time, which he described as "people in business suits on cell phones on rocket ships. All of the overused metaphors, or overused imagery."

He used that time to find his way back to his illustrator roots, where his love for art came first. "Instead of just solving the problem for the art director, I started to make it more for myself. In those two or three weeks that I was stuck up here, I think I created five new paintings and it sort of become the basis of my work now. My career sort of happened then."

Growing up in the Chicago suburbs, Buzelli spent weekends watching Bill Alexander's show "The Magic of Oil Painting" with his grandfather and painting in the elder's TV repair workshop. Buzelli credits those days spent with his grandfather as his motivator in pursuing art, as well as the encouragement of his mother, who told him he had to re-enroll in a high school art class he had quit because he wasn't getting along with the teacher. "Without those two things, I highly doubt I'd be doing what I'm doing," he says. 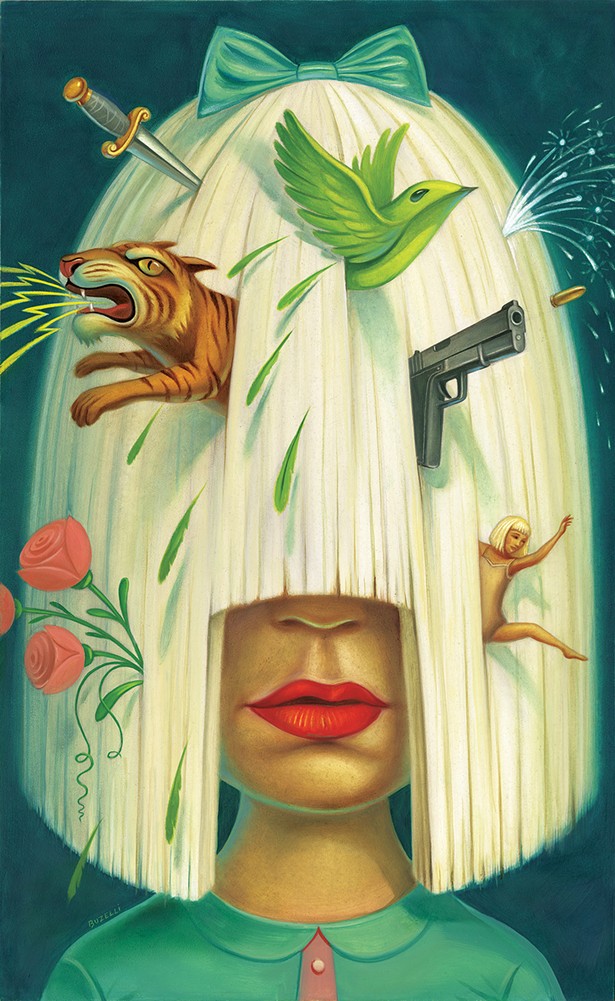 All of Buzelli's illustrations—from the tennis player constellations of the New York Times piece to the animal-centric SVA Subway Series, which he says is a favorite—including any revisions, are done on paper with oil paints and later scanned digitally. "I've learned not to use certain colors because they take forever to dry—like white, so a lot of my whites are the white of the board. Usually with oil paint you build up. I'm doing the opposite. I've learned ways around it." he says.

Animals are a frequent theme in Buzelli's illustrations, though that wasn't always the case for his professional work. During his break for his ACL injury, he went back to using animals like he did when he was younger. "It opened up a whole new avenue for me in terms of visual language. My concepts weren't as strong [but] when I started using animals, the actual action and the verb of the piece became so much more apparent and important," Buzelli says.

You can find Buzelli's illustrations on book covers, posters for ad campaigns, merchandising, and branding. Editorial, though, of which he has created pieces for Variety and the Washington Post, among others, he considers his bread and butter. "I've really come to love editorial illustration because it's got this basic element where you get this text and you try to come up with a visual solution to communicate. I whip out 30 or 40 thumbnail sketches, getting them down on paper without thinking that they're bad or good," he says. "It happens so fast that there's not a lot of time for others to have input. For me, it's the most honest sort of form of commercial art."

Though creative jobs can be extremely fulfilling for an artist, they are, at the end of the day, a job. "The trick is to hide a little bit for yourself in it," Buzelli says. "I think that's what I was missing those first seven to 10 years. I forgot that this could be art. It's not just about pleasing the art director and doing a job. In order to have a longer career, you really need to figure out a way to make it for yourself as well."