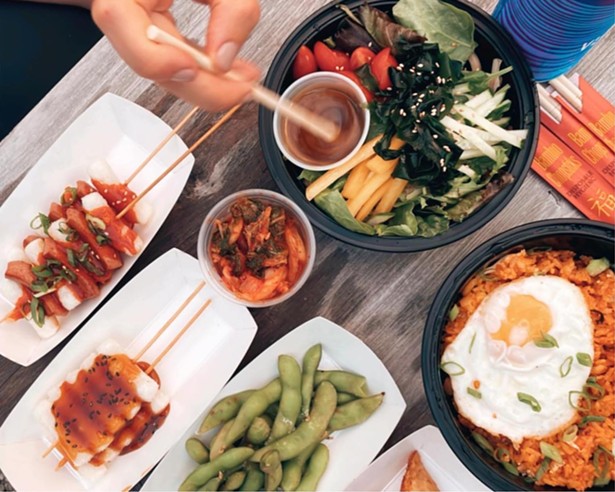 “My husband keeps trying to get me to start a restaurant, and I keep saying I’ll never see him if I do,” says Michelle Chiu. The solution turned out to be a seasonal food pop-up, which Chiu can run alongside her tech-startup consulting business.

The menu for Two Five leans heavily Korean, reflecting Chiu’s heritage, but she also dips into Japanese and Chinese culinary traditions to round out the offerings of mouth-watering, Asian comfort food. Think handmade mandoo—pillowy, steamed dumplings filled with beef or pork, kimchi, and veggies or pajeon—Korean savory pancakes with scallion, zucchini, shredded carrot, onion, chives, and shrimp paired with a dipping sauce you could drink.

“My whole reason and passion behind Two Five is to be able to share my love of food—especially Asian food—with the community around us,” says Chiu, who moved upstate full-time in 2019. “I am Korean, and my husband, Mark, is half-Japanese and half-Taiwanese. This is what we love to eat. As we met more people up here, they kept saying to us, ‘ Oh, I wish there was more Asian food available. So we’d invite them over and cook for them. That's the thing I love to do the most . The pop-up just gives me a platform to do that for more people.”

While the project began spontaneously—a conversation over drinks with the owner of The Last Bite in High Falls, then a kitchen takeover there, then several—in many ways Two Five is the culmination of a lifetime of personal passion and professional preparation. Chiu grew up in Korea until the age of four, and even when she moved to Australia and later Texas, she returned there every summer to stay with her aunt and grandmother. “My grandma in Korea was the most phenomenal cook. Every meal was a feast,” Chiu says. “Living abroad, we were always part of an expat community, so all the holidays were feasts with our extended immigrant family. I grew up begrudgingly mincing garlic and folding dumplings and shredding vegetables. All of that was education I didn't even know I was getting.”

Chiu was raised up in the Food Network era, teaching herself to cook and bake by watching TV and dreaming of going to culinary school. Her mother was supportive of the idea, but a sense of obligation to support the family drove Chiu into the corporate world, where she worked in consulting for over a decade before taking a job at Blue Apron. “Those were my four favorite years of my career,” she says. “That's really where I got exposure to food from a production perspective. I built out their experiential marketing program, worked on fulfillment and customer strategy—I did it all. That was when I was able to marry love of food with professional skills.” When she left, she launched her own consulting business for tech start-ups, including Hungry House, a ghost kitchen with a rotating roster of celebrity chefs.

“I was the interim COO. I helped launch two locations, worked with their chefs, and essentially ran the kitchen for half a year,” Chiu says of her Hungry House time. “That is when I really got exposure to what it means to cook and serve food for the masses. After I did my rounds with Hungry House and came back upstate, all this stuff just started hitting for Two Five. People started asking me to do pop-ups then I got introduced to Brendan from Catskills Cocktail Club and that’s how I joined the Stonehill’s family.”

Though her summer season has taken her throughout various locations in the Rondout Valley, including Accord Market and Egg’s Nest in High Falls, Two Five has mainly been a fixture at Stonehill’s inn in Accord, where the pop-up has been residence every Friday starting this summer, alongside the Catskills Cocktail Club. November 18 and December 9 are the last two dates of this residency.

A Marriage of Flavors

As the weather gets colder, you can expect Two Five’s menu to include dishes like a hearty Japanese curry made with seasonal, local vegetables; sweet and spicy buldak (literally fire chicken); japchae (stir-fried glass noodles), or fried Korean hot dogs. But don’t get attached to anything, because Chiu switches up the menu regularly. “I love the pop-up concept because it allows me to be super creative,” she says. “I'll repeat some things on my menu, but I typically like to change it up so that people who come more than once can experience different types of food. Also it’s seasonal. So now I’m cooking more things that are really filling winter foods versus in the summer more fresh vegetables.”

You’ll notice that Two Five's menus feature both Japanese and Korean names for the dishes. “There is so much history there,” Chiu says. “The Japanese occupied Korea for a long time, so the cultures and especially the food were heavily merged. The foods shared across both cultures are the ones I highlight most on my menus. For me, the fun of cooking, beyond recipes and techniques, is the mingling of my husband’s and my culture. And sometimes I’ll sprinkle in the underbelly for both of us—American.” Like her Halloween chili, made with gochujang chili paste and jalapeño pickled in a traditional Korean, soy sauce-based brine. And Chiu always has at least one gluten-free, vegetarian option on the menu.

She is still dreaming of owning her own little brick-and-mortar cafe one day, if the stars and the finances align. In the meantime, Chiu is happy to pursue her consulting and executive coaching career alongside Two Five, integrating things from her tech-forward work experience like QR ordering, digital ticketing, and data analysis to streamline operations. After the final Stonehill pop-up in December, she’ll take a break from the food truck for the colder months and is planning a few cooking classes for Bluecashew in Kingston and Inness hotel in Accord. “Winter up here is bleak. I want to give people something cozy to do indoors,” Chiu says.

But you can expect Two Five to be back in full force after the spring thaw. “It’s just so much fun,” Chiu says. “I feel really blessed to have this opportunity to take all that I’ve learned and built professionally and apply it to something that I love. Everything that happened up to this point had a purpose beyond just being a job. That’s the stuff about how the universe works that makes me giggle.”

A Hankerin' for Flanken: A Short Ribs Grill Recipe