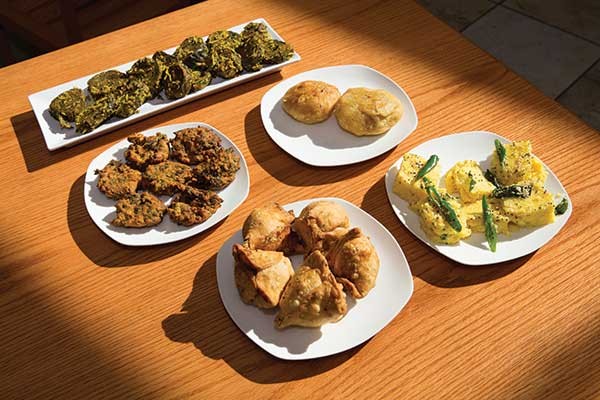 Newburgh is basically the last place you'd expect to find a restaurant like Nimai's Bliss Kitchen. The building that once housed a dingy diner now serves fresh, farm-to-table, all-vegetarian meals based on the ancient dietary practices of Ayurveda. The airy dining rooms glow with natural light pouring from skylights in the vaulted ceiling. The locally hand-carved tables and chairs taper elegantly at the leg and look onto windowsills decorated with spice-laden mason jars. In short, Nimai's Bliss Kitchen breaks Newburgh's cultural mold twice over, first by serving Indian food in a neighborhood dotted with pizzerias and taquerias, and then by adding a meatless, mystically inspired twist. Turns out, this cultural dissonance was exactly why the Raval brothers picked Newburgh to set up shop.

"We often think only the elite can afford to do yoga," says Dr. Ashik Raval with a smile. He wears a collared shirt, suit jacket, and tilaka mark on his forehead symbolizing his devotion to Krishna. "We think the same thing about health food, but it's not true. You don't need to be rich to eat healthy."

Nimai's Bliss Kitchen predicates itself on this maxim. Most menu items cost less than $10, and $13 buys you a bottomless thali platter complete with roti flat bread and dessert. The thali, an Indian classic, consists of rice and half a dozen sides served in small bowls on a distinctive tray. The heat and heaviness of the chana masala chickpeas balance with the riced, ginger-laced cauliflower; and the aloo subzi (potatoes and green beans) goes down like a long-lost comfort food. Then there's the creamy dal makhani, a rich blend of red lentils and tomato that pairs perfectly with the bread. On the subject of appetizers, the mixed vegetable pakoras deserve special note. At Nimai's, these fritters are a toothy amalgam of potato, broccoli, bell pepper, chickpea flour, and spices, deep-fried and served with a sweet-and-tangy tamarind sauce—a winning start to any meal.

The menu also accommodates palates new to Indian cuisine by offering an assortment of Western dishes like pizza and burgers, all of which adhere to the Ayurvedic principles of freshness and vegetarianism. Some of these, like the Eggplant Parm pizza and Al Pesto pasta, stick to traditional flavor profiles with vegan and gluten-free options at a nominal cost. Others, like the Mexican Pie and Dabeli Burger, flirt with Hispanic and Indian fusion concepts. The Dabeli, a mainstay in parts of India, would strike the average American as pure innovation in the art of sandwichmaking. A masala potato patty supplants the standard veggie patty as the main texture element, cilantro fills in for lettuce, peanuts supply the protein, and noodles made from chickpea flour add the necessary crunch factor. It arrives at the table bejeweled with pomegranate seeds, as exciting to behold as it is to eat.

Of Dosas and Doshas

Even though it originated several thousand years ago, Ayurveda (from Sanskrit yus "life" + veda "science") mirrors modern nutrition in its founding principal: Food may be used to promote internal health and help fight disease. (Imagine coming to this conclusion back when the wheel had just come out in beta.) According to Ayurvedic philosophy, the body contains three elemental substances called doshas: pitta (fire), vata (air), and kapha (earth). The goal is to keep these qualities in equal proportion. Illness and discomfort indicate that one force has overridden the others and must be balanced out again using the right combination of foods.

Traditionally, the Ayurvedic meal functions as a sort of prescription and is cooked to address the consumer's unique nutritional needs. Since Nimai's Bliss Kitchen caters to the general public, however, it falls back on Ayurveda's fundamental values: freshness and vegetarianism. During winter, the restaurant resorts to regional farmer's markets for the bulk of its produce, but come spring, it will source three-quarters of its produce (and all of its milk) from Gita Nagari Organic Farm in Pennsylvania's Tuscarora Valley. The restaurant's menu changes on a weekly basis to accommodate harvest cycles, and the kitchen only serves food that has been prepared within the past few hours. Each dish thrills with vibrancy, leaving even the most diehard omnivores feeling deeply satisfied.

And, counterintuitive though it may seem to have sweets in a healthy kitchen, Nimai's offers a host of Ayurvedic desserts designed to aid in healing rather than inhibit it. Many of these sweets are cooked with ghee, a specially prepared clarified butter loaded with vitamins and essential fatty acids. In most cases, they're also more nutrient rich than your average puff pastry. Take ghari, for instance: a doughnut-hole-size pistachio cookie made with ghee and cardamom. Or the carrot halwa, a delicious hash of carrot, raisins, and almonds finished off with cardamom and milk. Or, everyone's favorite, the mango lassi, an Indian smoothie made with homemade yogurt and fresh mango. "If taken not just by themselves but with other nutritious foods—fruit, nuts, spices, and so on—sweet things do have a place in the diet, beyond sensory enjoyment," says Dr. Raval.