July 26, 2011
Last Updated: 08/07/2013 4:30 pm
comment
Some titles are too perfect. Take “Amongst a Swarm of Hummingbirds,” the opening track on Alexander Turnquist’s 2007 album, Faint at the Loudest Hour (VHF Records). Chiming cascades of fingerpicked notes swell and crest while a distinct melodic theme—sometimes audible, sometimes merely implied—glides and darts above, below, and straight through what the Hudson-based guitarist himself well describes as “amorphous flutter.” And then, roughly halfway through the piece, just before the 4:50 mark, things go from hypnotic to unhinged, as a segment of hazy, disintegrating electronic drones kicks in and expands. The piece finally fades to reveal the bare sound of Turnquist’s impossibly fleet picking fingers slowing down to bring everything in for a gentle landing.

“My dad has some hummingbird feeders at his house,” says the soft-spoken 12-string specialist. “Hummingbirds are really amazing to watch, the most incredibly rapid wing movement. So that’s what [the track] made me think of. The title definitely fits, I think. [Choosing titles for his instrumental works] isn’t the same for every piece. They’re not always completely literal. Sometimes they do come from something real-life, like that one, but sometimes they come from a fictional thing—a book, or maybe a journal rambling. Sometimes I come up with the title before I come up with the music. And sometimes it has more than one meaning. Like ‘Waiting at the Departure Gate’ [the 16-minute centerpiece of Turnquist’s newest VHF release, Hallway of Mirrors]. That came from me seeing off my brother, who was moving to Brazil. So besides the literal thing of just being at the gate at the airport, it’s a metaphor for someone starting a new phase of life. But it also ended up being a tribute to Jack Rose, who had just passed when I came up with the tune.”

Rose, who died in 2009 of a heart attack at only 38, is the figurehead of a recent wave of young, forward-thinking guitarists descended from 1960s and ’70s Eastern-tinged, folk-based players like Loe Kottke, Robbie Basho, Bert Jansch, Sandy Bull, Davy Graham, Woodstock’s Peter Walker, and, casting the largest shadow, the great John Fahey. But Turnquist insists that, unlike in the cases of many of his peers—who include James Blackshaw, Eric Carbonera, Ben Chasny, Mike Tamburo, and Cian Nugent—the pervasive Fahey wasn’t an influence at first. “Every new acoustic instrumental guitarist gets compared to John Fahey,” groans Turnquist. “But I’d never heard him until after I’d started making records and writers were mentioning him in my reviews. Philip Glass and the first few George Winston records and the other early stuff on Windham Hill Records, before [the label] turned into New Age water-fountain music—that was what inspired me the most.” Such unexpected touchstones give Turnquist the orchestrated, idiosyncratic style that makes him his own man as a player and composer. As with some of his new-generation compatriots, his recordings often feature additional instruments and prepared samples and other experimental noise elements. At only 23, he has a technique so mind-bogglingly advanced it dwarfs that of guitarists who’ve been playing for decades.

“When I first heard Alexander, what entranced me was the way he was using the droning aspects of the guitar to get all of these amazing, singing overtones going,” says Foster Reed, who recently folded his trailblazing New Albion label to move into presenting live events (a series last month at the Stone in New York featured an evening of Turnquist performing new works accompanied by pianist Liam Singer, vibraphonist Matthew O’Koren, and violinist Christopher Tignor). “He’s a very curious musician and he has this gift for being able to create a strong narrative, which makes his music more listenable than a lot of similar music. In my era we were rebelling against serialism by drawing on rock and jazz and all of this other music that was outside the contemporary classical or ‘new music’ realm. To me, what Alexander and these other young guys are doing is neat because they were already born into that sensibility.”

Turnquist himself was born and raised in Idaho. Before he came along, his father, singer-songwriter Brian Turnquist, played guitar in the Martian Sand Band, the region’s answer to the Mothers of Invention. “They dressed up like wizards and toured in a purple-and-green school bus that my mom decorated,” says the junior player. “They never made a record, but I’m hoping some tapes turn up someday that could be released. I’ve also been pushing my dad to get a record of his own songs out.”

Alexander started learning to play from his father at age six, spellbound by the household’s Malcom Dalglish and Leo Kottke albums. “I got fed up with my high school peers who played guitar,” recalls Turnquist, who doesn’t sing and, unusually for a teenage musician, never aspired to be in a band. “They were just sitting around downloading tabs off the Web, so they could learn to play Dashboard Confessional or John Mayer songs to impress girls. I wanted to take the guitar seriously, to focus all of my energy on it.”

As with so many musicians, guidance from the local independent record shop—in Turnquist’s case, the Sound Exchange in Boise—was pivotal. “[The employees] had an idea of what kind of music I liked, so they’d play me new stuff that came in and then I’d order it,” Turnquist says. “That’s how I heard people like [electronic artist] Tim Hecker and all of these contemporary composers and ambient musicians when I was 16. It got me thinking about making ambient music with acoustic instruments.”

He cut a few homemade CDs and left for San Francisco to study under Grammy-nominated fingerstyle player Alex de Grassi, before moving once again to North Carolina, where he recorded Faint at the Loudest Hour, his official debut. With Turnquist on six-string, 12-string, and lap steel guitars, plus vibes, piano, and sampling, the beautifully hypnotic six-track suite turned many a critical head, gaining high marks from the likes of Pitchfork and MOJO, the latter praising its “filmic beauty [and] chilly pastoralism.” Apneic (Kning Disk, also 2007) followed, and by the release of As the Twilight Crane Dreams in Color (VHF, 2008), a record comprised of three meandering, dreamlike pieces 10 to nearly 20 minutes in length, the searching artist had landed in Hudson, drawn by the close community of progressive musicians connected to the Spotty Dog Books & Ale. (Between tours of Europe and the US, Turnquist tends bar at the café/bookstore/music venue). The entirely acoustic Hallway of Mirrors was recorded locally with engineers Bram Tobey and Henry Hirsch (Lenny Kravitz, Joan Osbourne) at Waterfront Studio, and is absolutely breathtaking in its use of clear-ringing, sustained harmonic overtones. “The sustain pedals on the piano and the vibraphone were down the entire time we were recording,” notes Turnquist. A video for the majestic title track recently premiered on the IFC network’s website.

Hallway of Mirrors opens with the piece “Running Toward” and closes with one called “Running From.” Listening to his patient, seriously meditative music, the fact that Turnquist is an avid distance runner seems only natural. “A lot of times when I’m working on writing something I’ll put it on my iPod and listen to it while I’m running,” says the composer, also a visual artist whose sculptures and photographs have shown in Hudson galleries and whose stark images grace the packaging of his albums. “It helps me to work stuff out. Some of the parts in the songs for me evoke the feeling I get when I have what’s called a runner’s high.”

Watching Turnquist play solo is a high in itself, a time-stopping miracle from which one emerges blissfully dazed, as though coming into the light from some watery womb. When the music’s in full flight, conjured by his mind and the long acrylic nails the guitarist has worn on his picking fingers since age 17 (“I took a lot of shit back then, living in Idaho.”), it’s hard to fathom that you’re listening to one person play the guitar. Throughout the performance, Turnquist’s recurring melodic motifs sweep gracefully across the high and low registers as he simultaneously weaves lacy patterns of haunting filigree. At the end of the set, it takes some doing to snap one’s jaw back in place.

“With Alex’s playing I love the tonalities he chooses to focus on, and the way his playing can get so close to being arrhythmic without ever falling into that,” says Brooklyn’s Will Stratton, a daunting fingerstyle guitarist in his own right and an acclaimed, folk-based singer-songwriter. “He draws more on the contemporary classical tradition—Morton Feldman, Christian Wolff, John Cage—and it’s great hearing that filtered through his music, but he does it in his own way. Anybody interested in hearing something they haven’t heard before should listen to Alex. I guarantee they won’t be disappointed.”

Immersed as he is in his instrument, how, exactly, does Turnquist manage to still keep the guitar interesting? “I guess I always try to do new things, especially if they’re things I struggle with,” he says, adding that lately he’s been experimenting with new tunings and pieces using only pure harmonics. “But it’s still about trying to make something that’s beautiful and puts you in a different state of mind.”

Alexander Turnquist will play with Shana Falana at Market Market in Rosendale on August 13. Hallway of Mirrors is out now on VHF Records. www.alexanderturnquist.com. 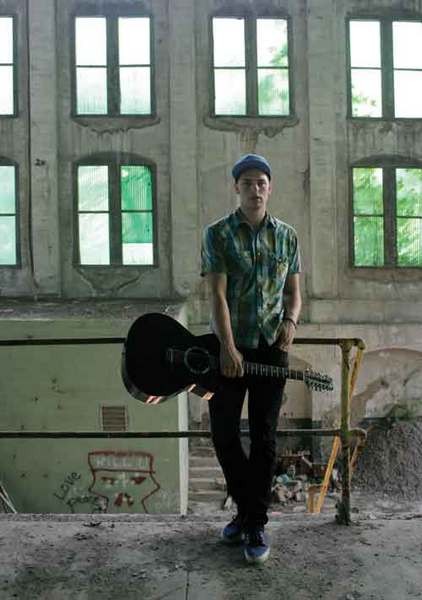