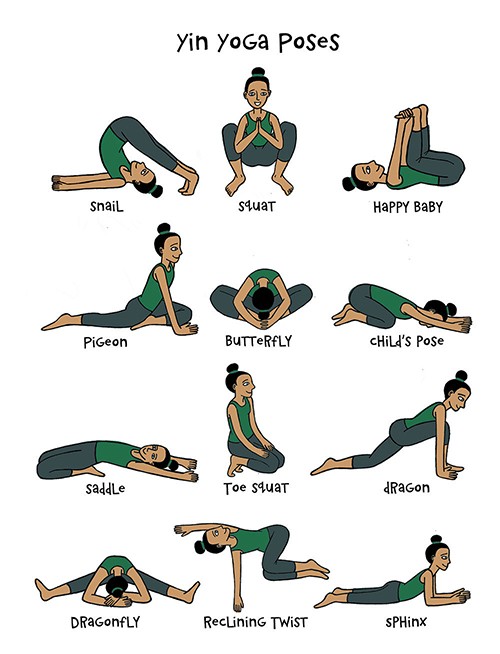 It was a friend's stroke that originally brought Dawn Sinton to a Yin Yoga class. Sinton (not her real name), who turned 80 this year, had tried Feldenkrais movement classes and gone to the gym her whole life, but had never tried yoga before. "The stroke had left my friend very off-balance," Sinton recalls, "but she had been steadily improving. One day she said to me, 'Dawn, you would really like this Yin Yoga class I'm taking.' So I tried it: Now I think I go more than she does."

For the first six months, Sinton found the classes very difficult. Working with Woodstock-based Yin instructor Will LeBlanc, Sinton began by focusing on special balancing postures. "I only see out of one eye," she explains, "and over time that had affected my posture. When you're blind in one eye it affects the muscles in your neck, it affects the muscles in your arms; your whole spine twists in a peculiar way that doesn't help your balance."

Even though it was difficult, Sinton found that she loved the practice. She was sleeping better than she had in years. ("If I wake up in the middle of the night, I do a series of forward folds: It's better than a pill," she explains.) During allergy season, Yin classes helped clear out her sinuses, reducing her need for antihistamines. In her daily movements she felt much more supple and found she was less accident-prone. Most important, Yin's internal focus helped her to develop a "whole body consciousness" that began to permeate throughout her life. She felt tuned into her body's needs in a way she hadn't before. "It's almost like a pendulum telling me what and what not to eat and when to eat. To get enough sleep. It acts as a monitor. When I don't take care of my body, I feel it when I show up in yoga class."

About a year ago, Sinton broke her kneecap. The adaptable nature of her Yin classes made it possible for her to continue practicing with just her upper body and uninjured leg. "I healed quite quickly," Sinton explains. Recently, having her gall bladder removed waylaid her practice, but only for a month. "I was back at it," she recalls, "as soon as the doctor would allow it."

Yin for a Yang World

Yin Yoga is a slow, meditative practice that encourages students to shift their focus inward, not just toward their mental state, but to begin a specific inquiry into the body's inner landscape. All poses are on the floor (no standing poses or headstands here) and most are held for a minimum of two minutes, and some for up to 20. Like other forms of yoga, Yin brings increased flexibility and decreased stress, contributing to a general state of wellbeing. "The health benefit I hear students describe most often is that they sleep better," says LeBlanc.

The growing popularity of Yin Yoga is no surprise considering the "yang" nature of most people's daily lives. (Since LeBlanc began teaching in 2003, he's recorded a steady uptick in class attendance and interest, and has noticed "a very definite emerging of Yin back into the popular yoga consciousness.") The sensory bombardment most people experience on a daily basis, coupled with the need in Western culture to look for logic and meaning in every situation, sets our minds into constant, often repetitive, chatter. The ubiquitous nature of electronics has only amplified and intensified our "monkey minds." Yin Yoga provides the perfect antidote to this overstimulation rampant in modern life.

Originating in ancient India, a broad variety of yoga schools formed, principally with the intent of preparing practitioners to sit for meditation. "As yoga migrated to the West," explains LeBlanc, "it was taught and then incorporated by teachers who standardized their own style of teaching." What is now commonly thought of as yoga in modern practice is often one of the more yang or active-style yogas that have become popular in the West—Hatha, Vinyasa, or Ashtanga, to name a few. "However," explains LeBlanc, "no one person came up with Yin Yoga." It's more of a blanket term describing a process of slowing down and sinking into one's body. "This is originally what yoga was for," he explains, "tuning into the wisdom of the body."

However, Yin Yoga shouldn't be mistaken for Restorative Yoga either. Restorative Yoga, which focuses on deep relaxation and healing, is often utilized to help students recover from injuries or excessive stress and relies heavily on props like straps and bolsters. It was exactly the search for a middle ground between active and restorative yoga traditions that brought teacher Bobbie Manchard to study Yin Yoga. A Manhattan-based yoga instructor, who often leads workshops helping other teachers incorporate Yin postures and philosophy into their classes, she wanted to find a space between the two extremes. "Life in the city is all about work, work, work and then flaking out in front of the TV," she explains. Similarly, she found the yoga classes she led were either all yang-style striving or completely restive. "I felt there had to be a way to dial down, without just flaking out on a bolster."